13th ADWPJJC: black belt aces fight to the end in country qualifiers to secure their spots in the main brackets

56kg – Nathanael Fernandes beat three very well known competitors on his way to the main bracket. First he beat Thalison for scoring last in a 4-4 tie. Then he beat Oziel Carvalho 1-0 to meet Rodnei Junior. A 2-1 lead took Nathan to the main bracket.

69kg – Israel Sousa kept his dream of a second gold medal in a row by qualifying for the main bracket in three matches. He beat Thiago Macedo 2-0, finished Diego Medeiros and beat Leo Saggioro 5-2 in a thrilling final.

77kg – Total control. That’s how Micael Galvão made his way to the main bracket. He finished Francisco Diego, beat Leo Lara 9-0 and caught Julio Cezar Jr with a choke from the back in the final.

85kg – Isaque Bahiense is on his way to defend his title. He made it to the main bracket by finishing Elias Costa with a choke from the back. Then he beat Igor Souza 5-2. In the final, Isaque secured the spot with a referee decision win over Catriel Fernandes following a 0-0 tie.

120kg – Gutemberg Pereira fought twice to secure his spot in the main bracket. He beat Tacio Carneiro 1-0, then beat Wallace Costa via WO. The final was against Ricardo Evangelista and Gutemberg found a choke from the back to win. 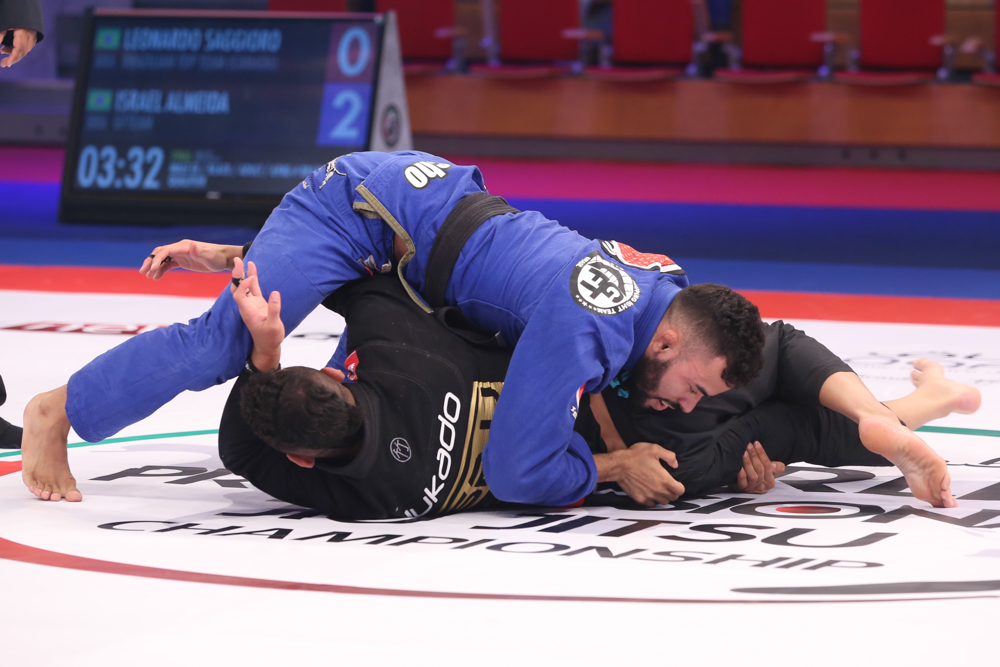 49kg – Vanderlucia Barbosa never quit! In three matches, she secured her spot in the main bracket by finishing Tatiane Nunes and beating Flavia Bastos 5-3. The final challenge was the toughest, as Vanderlucia found an armbar/triangle to finish Diana Teixeira in the final seconds.

55kg – Bia Basilio wants her 4th gold medal in the ADWPJJC. Her run started with two wins in the qualifier. First she beat Dayane Bazzoni via WO and then faced a tough opponent in Leticia Muramaki to win via referees decision.

62kg – When six-time ADWPJJC champion Bia Mesquita wants a spot in the main bracket, it is hard to stop her. In three matches, Bia finished Vitória Vieira, beat Deborah Costa via WO and finally outscored Gabriela Pereira 1-0.

70kg – Three matches for Larissa Dias to secure her spot in the main bracket. She beat Rafaela Bertolot 5-0, Izadora Silva 1-0 and Thalyta Silva 2-0 in the final.

95kg – Gabrieli Pessanha had the toughest of challenges to make it to the main bracket. She had to beat 2-time ADWPJJC champion Tayane Porfirio in a best of three bracket. The first match was close and Gabi won via referees decision. The second match was all thrills, as Tayane went ahead 3-0 with a guard pass and Gabi scored four points to win the very last seconds.

Day 3 of the 13th ADWPJJC also crowned the champions in the adult blue belt and adult purple belt divisions. Click here for the full results. Follow the complete coverage on Instagram. Watch all matches live on YouTube.

13th ADWPJJC: global champions crowned after a thrilling day of matches in the Masters division