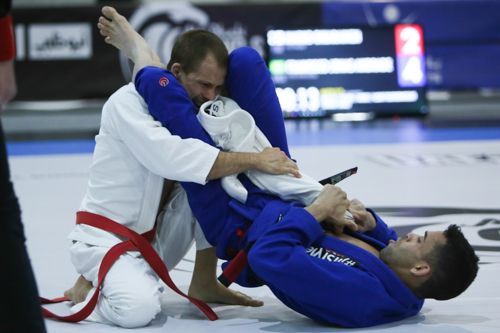 Abu Dhabi Grand Slam Tour: Day of Triumph in Russia as Jiu-Jitsu Returns safely to Moscow for the Third Leg of the 2020/2021 ADGS Season

Jiu Jitsu is back in Russia. Through the work of hundreds of dedicated people, the Abu Dhabi Grand Slam Tour landed in Moscow this Sunday, March 14.

Athletes from all over the world came to the Crocus City Hall to compete again, even in these difficult times.

All athletes competing at the ADGS Moscow followed the health and safety guidelines set up by the AJP during the COVID-19 pandemic, which included presenting negative tests for the novel coronavirus. Masks were mandatory during the event and the access to the venue was restricted to athletes and coaches.

Light-featherweight (55kg) – Brazil’s Francisco Jonas de Andrade flew in from Barcelona, Spain, to fight Finland’s Marko Oikarainen twice and secure the gold medal. In the first match, Jonas caught Marko in a triangle. In the second match, Jonas managed an armbar with only 10 seconds left in the clock.

Lightweight (62kg) – In another two-match campaign, Russia’s Abubakar Khadaev first beat his fellow countryman Dzhimher Razmadze 4-2. In the final, Khadaev finished Shamil Gaziev with a choke from the back to secure the gold medal.

Welterweight (77kg) – Russian Vladislav Losev had the home crowd on their feet with two wins to take the gold medal. First he beat Riad Dzhalmalbeili 1-0 to reach the final. In the gold medal match, Losev had a imposing performance to beat Brazil’s José Henrique Tatagiba 8-4.

Middleweight (85kg) – Another gold medal for Russia. Abdulbari Guseinov kicked off his campaign with a 2-0 win over Arsen Shapiev. In the gold medal match, Guseinov put his guard game to work and beat Magomed Abdulkadirov 2-1 and took the title home.

Light-heavyweight (94kg) – Probably the most well known competitor in the ADGS Moscow, Adam Wardzisnki came, fought and conquered the gold medal in two matches. He first finished Artem Ushakov with a choke from the mount to reach the final. The gold medal was secured with a choke from the omoplata position on Viacheslav Ilin. Job well done for Adam.

Super-Heavyweight (120kg) – Brazil’s Wallace Costa and Russia’s Dimitrii Volstrikov fought twice to decide who’s going to take the gold medal home. Costa fist won 7-3 to go ahead in the count. In the final match, Costa made his game work again and caught Volstrikov with an armbar.

Light-featherweight (55kg) – Lots of talent on display in the women’s division as well. Estonia’s Liisi Vaht fought twice to be crowned the champion. She first caught Russian Ekaterina Kustikova with an armbar in the semifinals. Vaht’s opponent in the final came from Kazakhstan. Moldir Mekenbayeva beat Russia’s Olga Vladimorova by referee’s decision following a 0-0 tie. The gold medal match saw Liisi work her magic and catch Moldir with a choke from the back. Gold medal for Estonia.

Lots of action also in the Master 1 division as athletes over 30 years of age gave their best on the mats. Here are the champions.

The color belt divisions were also a great source of thrills for the crowd. Competitors proved they are ready for bigger challenges on their path to the black belt. Here are the champions of Moscow.

Find the complete results at ajptour.com.