Abu Dhabi Grand Slam Miami: champions put on a show in Florida to open 2020/2021 season with a bang

The 2020/2021 season of the Abu Dhabi Grand Slam Tour is officially open. Hundreds of athletes gathered this Sunday, September 27, at the Miami Airport Convention Center, to display their skills and compete for the gold medals.

On the sidelines, some of Jiu-Jitsu’s greatest names were present coaching their students. André Galvão, Guilherme Mendes, Roberto “Cyborg” Abreu, Angelica Galvão and many others celebrated the successes of their schools in Florida. Purple belts, brown belts and black belts, men and women, adult and master 1 and 2, they all gave their best on the mats.

Light-Featherweight (56kg) – Francisco Jonas Andrade and Estevan Martinez fought twice to settle the title. Jonas won 7-0 in the first match and 1-0 in the second match to take the gold medal home.

Featherweight (62kg) – Lucas Pinheiro secured the gold medal in three matches. He first caught Connor Welle with a triangle choke. Then, he beat Bebeto Oliveira 1-0 to make it to the final. The gold medal match put Lucas against American Suraj Budhram. A 6-0 lead secured the title for Lucas.

Lightweight (69kg) – Kennedy Maciel came, fought and won. In three matches, he first beat João Mendes 2-1, then he caught Rodrigo Cardoso with an armbar. In the gold medal match, Kennedy repeated his performance and caught Thiago Macedo with an armbar.

Welterweight (77kg) – Michael Liera Jr had the toughest path to the gold medal than any champion in Miami. In 4 matches, he first beat Jose Luna 9-1, then faced no other than Marcio André. A 4-4 tie granted Liera a spot in the semifinals for scoring last. A 1-0 lead over Johnny Tama put Liera in the final. The gold medal became reality after a 1-0 win over Johnatha Alves.

Middleweight (85kg) – Guthierry Barbosa fought three times to secure the gold medal. He finished Carlos Souza and outscored Andre Gois 2-1 to reach the final. The gold medal match was a thrilling affair against Ronaldo Junior, decided by one point in favor of Guthierry.

Light-Heavyweight (94kg) – Fellipe Silva had three appointments on the mats of Miami. He first finished Erich Schlosser and then met up with Nathan Mendelsohn in the semifinals. A triangle choke put Silva in the final. The gold medal match was against Rafael Lima, and it was a tough one. A narrow 2-0 lead gave Silva the gold medal.

Super-Heavyweight (120kg) – In two matches, Max Gimenes beat Klidson Abreu twice to secure the gold medal. He first built a 3-0 lead. In the second match, Gimenes was able to catch Klidson in an omoplata. 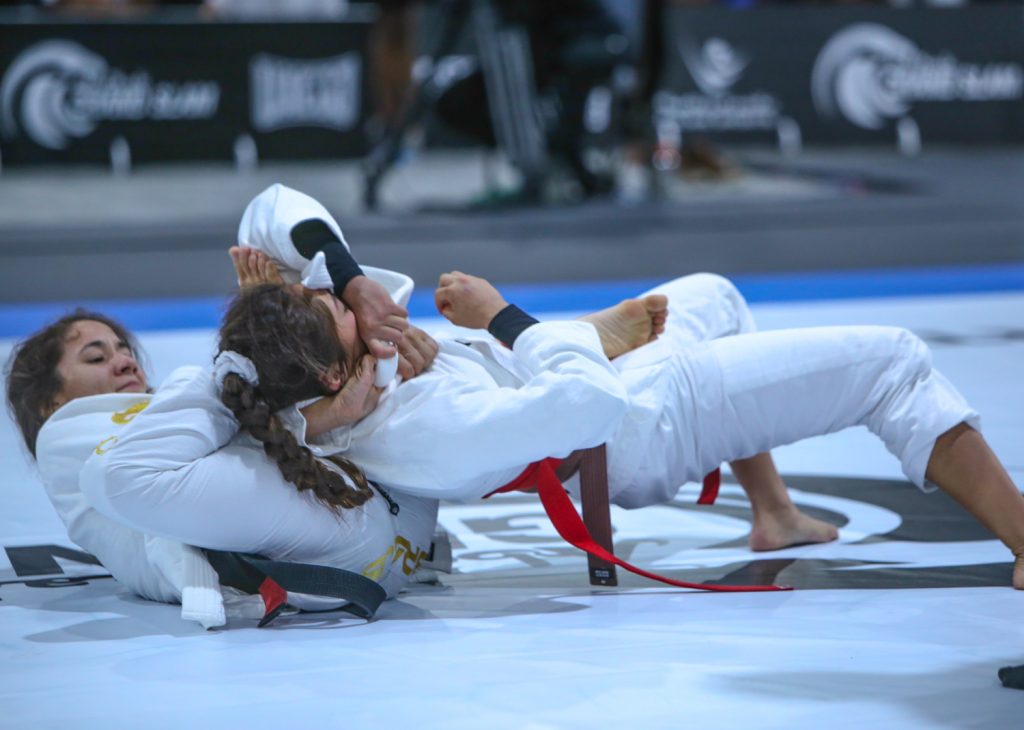 Roosterweight (49kg) – Jessa Khan first caught Sarah Takushi with an armbar. Mayssa Bastos also reached the final with a 25-0 win over Sarah Takushi. The gold medal match was the most thrilling encounter of the weekend. Jessa nearly caught Mayssa in the very beginning with a triangle choke. The super champion took her time to defend and escape. In the end, Mayssa came around and built a 6-4 lead to take another gold medal home.

Light-Featherweight (55kg) – In two matches, Thamires Aquino made her way to the gold medal. In the semifinals, she beat Alexa Yanes 3-1. The gold medal match against Eliana Carauni was very dynamic. A 8-5 lead gave Thamires the title.

Middleweight (70kg) – Rafaela Guedes had three super-tough matches on her way to the gold medal. She finished Gloria Armas, then beat Melissa Cueto 1-0 in the semifinals. The gold medal match saw Rafaela comfortable to build a 8-2 lead over Emilly Silva.

Heavyweight (95kg) – Talita Nogueira fought twice in her campaign for the gold medal. She beat Kylie Baker 5-0 and then outscored Maria Malyjasiak 5-2 in the final.