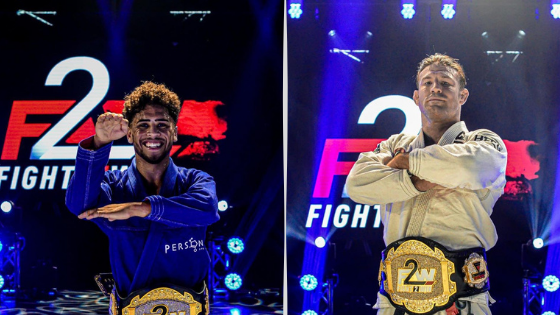 Dallas Tx – Fight to Win 151 commenced in the great state of Texas with another spectacular event between very tough competitors. This was a great fight card with some very interesting matchups and an unlikely upset. If you didn’t have the opportunity to view F2W151 on FloGrappling, not to worry. We gotcha! Here is a quick recap of the featured main match and the co-main event and the main event.

Our main event was for the lightweight championship belt. Maciel versus Queixinho. At the start of the match, Maciel immediately sat down inviting Queixinho to enter his guard. They start off by attacking each other’s legs. Most of the match was in this position. There were a few times where they got to their feet and we were able to see some takedown attempts from Kennedy as well as great takedown defense by Queixinho. Ultimately Kennedy got a hold of Queixinho’s leg and went for a foot lock. With that being the only submission attempt of the match, it was enough to earn him the victory to become Lightweight Champ.

Immediately after the match started, we knew what Tex was after. Tex sat down and went straight for Lovato’s leg. With what looked to be a stalemate, the ref stepped in and restarted the two to get some movement. Tex immediately protested the restart (to no avail.), and so with that, they got back in the center of the mat and continued from there. They both were at a standstill with Tex totally focused on the ankle of Lovato, and that’s how the match ended with Tex coming up with the decision win.

Gabriel Argus and Marcio Andre immediately clashed. With Andre being the smaller competitor, tried for a sweep attempt but it didn’t work. Both fought to establish their grips throughout the match. There were a few switches from the top and bottom positions as Andre tried to work his guard passing against Gabriel but neither one of them was able to attempt any submissions. The match concluded at the scheduled time limit with Arges earning the judges’ decision.