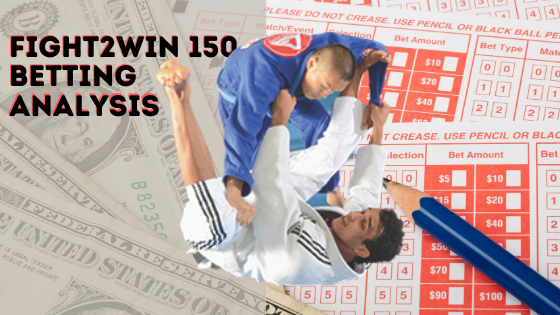 The main event of F2W 150 features the F2W debut of one of the greatest competitors of his generation Romulo Barral from Gracie Barra Northridge taking of Tanner Rice from Rice Brothers Jiu-Jitsu. Both men are black belts and only Tanner has competed under F2W rules before.

Romulo is one of the most exciting and respected competitors in history and it is about time we see him on the F2W stage. This is a gi match that suits the strengths of both men. In the GI, Romulo is a 5x World Champion and has 6 silver medals at the IBJJF Worlds. Romulo is famous for his spider guard, knee cut passing, and his cross-choke. At 37 years old, he might be past his athletic prime, but this is grappling and not MMA. I don’t believe age plays as much of a factor and Romulo may also be ageless.

Tanner is 10 years younger than Romulo and is one of the most well-known Americans among active jiu-jitsu competitors. He has a great open guard with many tricky set-ups and is very dangerous everywhere.  Tanner has to take advantage of his youth and pressure Romulo with his speed, looking for submissions along the way to rack up points. Tanner has not been able to overcome most of the competitors at the top-tier and Romulo definitely a top-tier competitor.

I predict Romulo to win by submission in regulation. I think Romulo is just too much of a beast still. He will have the experience and size advantage in this match-up. Romulo is a big dude right now and I believe the match is at 215LB to accommodate for him. Tanner usually competes at middleweight which is 181LB. I give Romulo Barral an implied probability of 75% and Tanner Rice an implied probability of 29% to win. Tanner will have to pull out all of the stops to defeat Romulo here. I think Romulo gets the job done inside the distance.

The co-main event features Marcio Andre of Nova Uniao taking on the Ronaldo Junior of ATOS. Both men are black belts and F2W Veterans.

Marcio has been quiet over the last few years after opening his own academy. But as a young black belt, he was inches away from winning the World Championship and his resume of victories includes all of the top competitors of his generation. Marcio is also one of the greatest passers you will ever see in competition. At his weight class and at his best, Marcio can beat anyone in the world. Over the last few years, however, it seems that Marcio has taken a step back from competition which may mean that he is less focused on his own training. He is also stepping up 2 weight classes to face Ronaldo.

Ronaldo recently lost a close decision to Vagner Rocha in a NOGI match at WNO. I believe that Ronaldo favors the GI and that is where this match will take place. Still looking to make a name for himself at the black belt level, this is Ronaldo’s chance at a coming-out party. He has a dangerous open guard and relentless passing. I think he will put on a show here, win or lose.

I predict Marcio to get the win by judges’ decision. I think despite Ronaldo’s size advantage, Marcio has too much experience competing at the high levels. At 20 years old, Ronaldo is going to be a great competitor for a very long time but I think Marcio gets the win here. I give Marcio Andre an implied probability of 60% and Ronaldo Junior an implied probability of 46% to win. Many questions will be answered in this match.

This match was a late addition to the event line-up. David Garmo will be the more experienced competitor here but Kody Steele is an up and coming competitor who can be making leaps of improvement in a short period of time. I lean Kody in this match even though he is still a brown belt (David is a black belt). Kody is a top NOGI prospect and I believe he has the potential to be one of the top NOGI competitors for a long time.

This match was also a late addition to the event line-up. John Combs is going to be heavily favored in this match-up and his experience competing at the highest levels can be seen in his resume. Ruben Rivera is a 10th Planet black belt who has experience in high-level competition. He has good leg locks and great defense. Ruben will need to show up with his best version yet to defeat John under the F2W format.