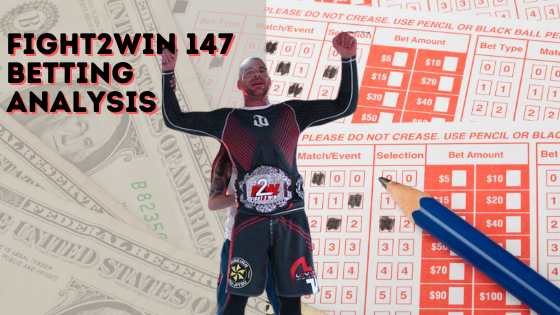 Fight2Win 147 is a submission-only grappling event taking place on Friday, July 17, 2020, in Austin, TX, and streamed live on FloGrappling.

The main event of F2W 147 is a GI match between Manuel Ribamar from Unity Jiu-Jitsu taking on Johnatha Alves from Art of Jiu-Jitsu. Both are black belts with Ribamar being the more decorated and experienced competitor at the black belt level. Johnatha is considered a phenom and is trained by 2 of the greatest competitors of all time, the Mendes brothers.

Both fighters compete in GI and NOGI but I consider Johnatha a GI specialist. Johnatha is known as a “berimbolo” expert and most of his competition experience comes from GI competition. He is certainly a stronger competitor with the GI on. Ribamar is the 2020 Europeon Open Champion and a very decorated and active competitor. If you watch Ribamar’s match against Espen Mathiason, you will see that he deals well with the berimbolo game. Whether or not he can stop Johnatha’s berimbolo will remain to be seen. I consider Johnatha and Levi Jones-Leary to be the two best guys in the world at the “berimbolo” game.

Ribamar should have a decent size advantage in this match-up. Johnatha competes mainly at Lightweight (168lbs) while Ribamar competes mainly at Middleweight (181lbs). Ribamar has to be the favorite here due to his experience and size. This is also a large step up in competition for Johnatha who’s competition experience comes mainly from the color belt levels. I give Ribamar an implied probability of 65% (-186) and Johnatha an implied probability of 40% (+150) to win. I predict Ribamar getting the judges decision. Johnatha is a phenom who can improve greatly in a short amount of time. He is live here for sure, “if” there is a submission I believe it will come from him. But, I suspect that Ribamar to get the job done.

The co-main features American jiu-jitsu legend and former Bellator champion Rafael Lovato Jr. taking on Helton Jose Jr. in a GI match. Rafael Lovato Jr. needs no introduction and has always been a fan favorite. Helton is lesser-known, a but tough competitor from the famed Cicero Costa team.

Lovato Jr. is the lankier fighter and Helton is the more compact stocky fighter. This will be an interesting match-up but I see Lovato dominating here with his experience and skill.  Helton is a tough competitor who has F2W experience but I don’t see him quite ready to deal with a guy like Lovato Jr. The risk here is that Lovato Jr. could be past his prime at 37 years of age and has shown chinks in his armor recently, being submitted by Lucas Barbosa. A guy who has the same body type as Helton. That being said, Helton is not quite Lucas Barbosa and I see Lovato Jr. winning by submission in regulation. I give Rafael Lovato Jr. an implied probability of 75% (-300) and Helton Jose Jr. an implied probability of 29% (+250) to win. Helton could surprise us but unless he’s made big improvements in his game, it will be difficult for him to overcome Lovato Jr.

ADCC Veteran John Combs is back to face Aaron Wilson, a Gustavo Dantas black belt and F2W veteran himself.

Combs, despite losing a decision at the last F2W event should be heavily favored here. He is the far more accomplished and experienced grappler between the two. Aaron Wilson however is a high level guy who has a strong and aggressive top game. I believe Combs will have the advantage in most categories here but Aaron Wilson should be the stronger and more powerful guy. Wilson has shown a weakness in the past to leg locks and is aggressive with takedowns, which can lead right into Comb’s high level guillotine game. I expect Combs to get the submission win in regulation. I give John Combs an implied probability of 70% (-233) and Aaron Wilson an implied probability of 34% (+195) to win. Should be a high paced match with lots of action.