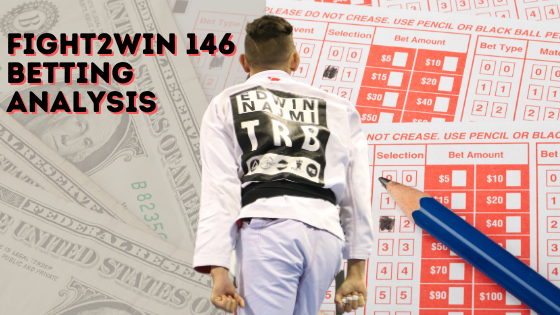 Fight2Win 146 is a submission-only grappling event that takes place on Friday, July 10, 2020, at the Fairmont Hotel in Austin, TX.

Format: 8 minute – Gi Submission Only (judges decision if no submission at the end of regulation)

The main event between Edwin Najmi and Osvaldo “Quexinho” Moizinho should be fireworks. Edwin is one of the top Gracie Barra competitors and Quexinho is a longtime competitor and the founder of Ares BJJ. Both are black belts with long resumes and Fight2win veterans.

Quexinho competed no-gi in his previous Fight2win match but I believe the gi allows him more ability to attack with his favorite position/submission, the omoplata. Edwin is known for his triangle choke and foot lock attacks and should go into this match the taller and larger athlete. Edwin has competed mainly at 168lbs while Quexinho has mainly competed at 154lbs. Edwin also regularly competes at higher weight classes up to absolute. Quexinho has recently moved up in weight class, but I haven’t him in any recent absolute divisions.

Edwin should have a decent size advantage here and while I think Quexinho has the speed and a slight technical advantage, size means a lot in sport grappling where you can make your opponent carry your weight. I don’t see these guys submitting each other in 8 minutes and Edwin’s size will be a lot to overcome for Quexinho. I think Edwin will get the decision win. I give Edwin Najmi an implied probability of 55% (-120) and Osvaldo “Quexinho” Moizinho an implied probability of 50% (+100). This will be a close match and there should be plenty of back and forth action.

Format: 8 minute – no-gi Submission Only (judges decision if no submission at the end of regulation)

This is an interesting match-up between Caio Terra, who is one of the legends of the sport and Gabe Tuttle, an up and comer from the 10th Planet Association. Both are black belts, but Caio has been a black belt since 2006, and Gabe only recently was promoted to black belt.

Gabe will be a large underdog against Caio who is considered one of the greatest competitors of all-time and a 10x no-gi World Champion. Caio has been out of competition for a few years due to injuries/illnesses, but he is still only 34 years old and will go into this matchup with a massive experience advantage. Caio does however split his time between gi and no-gi training while Gabe is a no-gi specialist who’s game is more tailored to the Fight2win ruleset. Gabe is also likely to be more versed in leg locks where leg reaping is allowed, especially heel hooks.

With that said, I don’t expect that to be enough for Gabe to overcome Caio in this match and I expect Caio to get the submission win. I give Caio Terra an implied probability of 80% (-400) and Gabe Tuttle an implied probability of 24% (+325) to win the match. I would give Caio an even higher probability but I do believe that Gabe has a path to victory if he can survive Caio’s attacks and win a decision by attempting more submissions. We have seen IBJJF specialists get caught by surprise with heel hooks in F2W. It is unlikely, but stranger things have happened.

Format: 8 minute – no-gi Submission Only (judges decision if no submission at the end of regulation)

I’m very excited for this no-gi match between John Combs of Easton JJ and Andrew Wiltse of Pedigo Submission Fighting. Both athletes are black belts who I think do their best work without the gi.

A former college All-American wrestler and ADCC veteran, John will have the wrestling and experience advantage. Andrew should have both a size and strength advantage as he recently competed at Fight2win at 200lbs. John is known for his guillotine choke attacks and Andrew is known for his pressure and relentless passing style. Andrew is coming into this match with a tremendous amount of hype. He is considered the best competitor out of Pedigo Submission Fighting and is the star of the popular “Daisy Fresh” documentary which follows his team. People who follow the sport know that Andrew has been on the rise since being sponsored by Shoyoroll as a blue belt. John Combs will provide a great test for him and is a big step up in competition.

I consider John to be the rightful favorite here. He has the one thing that Andrew may be lacking at this moment, which is competition experience at the highest levels. I think John wins by submission off of a wrestling scramble. I give John Combs an implied probability of 65% (-185) and Andrew Wiltse an implied probability of 40% (+150) to win the match. I expect Andrew to be a big star in the grappling world. But at the moment, John is not only a bigger name but has competed against bigger names and against a higher caliber of opponents. From what I’ve seen from Andrew, he is a kill or be killed kind of guy. Every time I’ve seen Andrew compete, he has put it all on the line for the chance to win. This makes him a very live underdog. 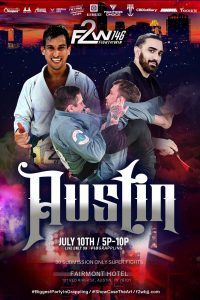