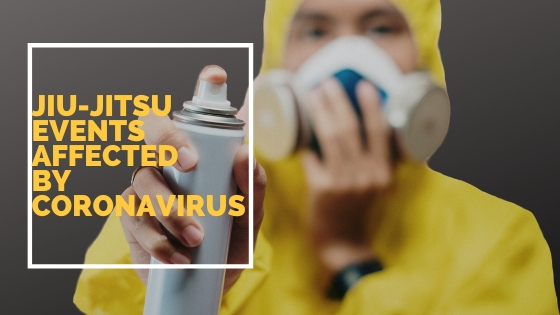 The worldwide Coronavirus outbreak, already declared by the World Health Organization (WHO) as an ongoing pandemic, has affected the jiu-jitsu community in many ways, just one week before the IBJJF Pan American Championships.

The tournament was scheduled to start on March 18 but has now been canceled with no news as to if it will be postponed for later this year, according to the International Brazilian Jiu-Jitsu Federation website. It released the below statement after temporarily taking down their calendar with all of this year’s remaining events including the 2020 IBJJF Worlds Championship.

“While the current COVID-19 (Coronavirus) pandemic is still developing, we are reviewing the dates for all future tournaments. The dates of future tournaments may change based on how the outbreak unfolds. We will be updating the Calendar of Events as soon as we have more information. We wish the best for the entire Jiu-Jitsu community during this trying time and hope everyone is able to stay healthy and safe so that we as a community can overcome and get back to what we all love doing: training Jiu-Jitsu.”

There are also several other jiu-jitsu tournaments that are feeling the effects of this viral outbreak. Besides the IBJJF Worlds, one of the biggest cancellations is the Abu Dhabi World Pro Jiu-Jitsu Championship, which was scheduled to run in mid-April, and has now been postponed to take place later this year. Organizers of the event have released the following statement.

“To support international efforts to limit the spread of COVID-19, the UAE Jiu-Jitsu Federation (UAEJJF) has decided to postpone all remaining sports events and activities until further notice to support effective preventive and precautionary efforts. This decision aligns with the Federation’s commitment to embody the values of the sport of jiu-jitsu and provide an exceptional experience to all athletes, audience, and partners. The Federation remains committed to growing the sport of jiu-jitsu and ensuring the health and safety of all athletes and stakeholders.”

Other jiu-jitsu tournaments affected by the pandemic are as follows:

In addition, all Fight To Win events in March and April have been canceled. The CEO of the event, Seth Daniels, made an announcement yesterday on his personal social media accounts.

“We hope to be hosting events again in May, but everything is up in the air at this point,” said Daniels. “We will be posting updates on Monday, starting March 30. Thank you for the support.”

Jiu-Jitsu Academies Are Temporarily Closed During The Coronavirus Pandemic