Stepping Up Your Game With Mental Practice

In the world of sport psychology, few performance-enhancing techniques have been as thoroughly studied as visualization. The idea is that, by simply running mental images in our minds, we are able to sharpen our game in real life. “Imagery” is the term used for visualization that involves other senses besides sight, such as imagining the “feel” of a particular technique or performance, in addition to the sounds, smells, and anything else to more adequately make the mental image “real.” We’ll use the terms interchangeably here. 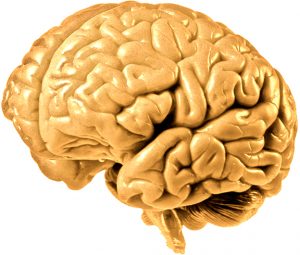 The Brain is a Funny Thing

It responds almost identically to reality as it does to an imagined reality. On both an emotional and physiological level, recollections or mental movies of events change how we feel.

Just as we can say that a coward dies a thousand deaths because he imagines them all so vividly, we can also say that a champion wins a thousand matches because he likely has imagined a victory many times in his mind before winning that particular tournament or match.

Few people have ever made this distinction of the champion as prominently as that of the coward, but both as equally as true. We are constantly “conjuring up” our own experiences, and feeling the feelings / seeing the sights associated with those experiences – all between our ears. If this is the case (which I assure you… it is) – shouldn’t we be using this force for good?

In this article we’ll look at some of the purposes of imagery/visualization, some of the most important principles to keep in mind when applying these techniques, and how you might go about applying them to increase your performance today.

The Purpose of Visualization for BJJ Performance 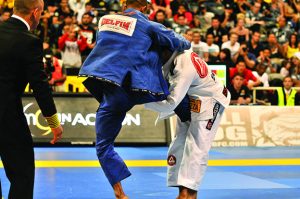 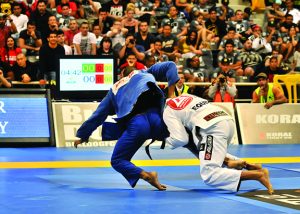 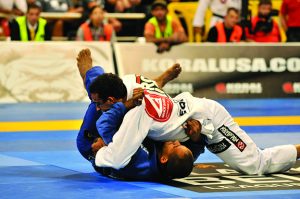 Visualization and imagery can be used for a number of reasons. Arguably, the most obvious reason is to smooth out particular techniques or sequences. You might be getting hung up on a particular part of a guard pass, or you might be a little bit slow when it comes to turning your favorite takedown into an armbar. By imagining yourself doing that particular move correctly and smoothly, you actually use a lot of the same “neural pathways” that you would by actually doing reps, and you can ingrain muscle memory patterns that you never developed in the “physical world” (remember, the brain cannot tell the difference).

I built my entire present sweep-game off of YouTube. Watching Caio Terra, Rafael Mendes, and Cobrinha use the inverted De la Riva guard got me obsessed with exploring the position, but as you can imagine – watching videos was not enough. I needed to specifically train those positions in practice, and also imagine myself applying them meaningfully in real matches. Without this mental practice element (I had no instructor to walk me through this guard), I would never have been able to apply the technique at my own weight class, never mind absolute divisions!

In addition, imagery can be used to get you familiar with a particular surrounding or circumstance. Maybe your next competition involves a different set of rules, or an atmosphere or venue that’s totally different from what you’re used to. By imagining yourself competing in that venue with the new rules, you can become accustomed to them without having to necessarily be in the venue itself.

My first few tournaments were my worst, not unlike many grapplers’ first experiences competing. Coaches yelling at me, opponents snarling and thrashing with 100% effort, and being in a giant room were all very new factors to deal with. I became more timid and less aggressive as I nearly froze up under the pressure I placed on myself in my mind. The best method for getting over this – hands down – is competing… all the time. The second best is imagining those same factors present in your mental grappling training, until they, too fade into the background and you can accept the bustle of the tournament scene as “normal.” 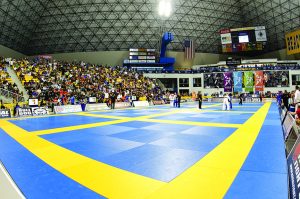 Imagery can also be used to instill confidence. A champion’s mindset going into a competition (whether we’re talking about Brazilian Jiu-Jitsu or water polo) is usually grounded in past experiences of success, past great performances. Imagining yourself winning particular matches and tournaments, having your hand raised, winning the trophy, etc… can bolster a sense of confidence heading into a match. This kind of mentality-shift is as important (if not more) than the smoothing out of individual techniques – especially at high levels of competition where perceived pressure is high.

There are a number of key ideas that I like to keep in mind when getting into an imagery routine. The first is to ground myself in reality whenever I apply imagery. For instance, if I’m going to practice imaginary reps of a technique in my mind, I always make sure to experiment with and really feel/understand that technique before practicing it in my imagination. This way, I have a good idea about how it works and feels when it is done right, so I can replicate that in my mind. Similarly, it’s best to actually walk into a venue before imagining what that venue will be like from looking at pictures. Getting a real sense of the room, seating, and atmosphere will allow for accurate imagery.

Secondly, imagery is like any other skill. Just like armbars and takedowns, the skill of imagery takes practice, practice, practice. When people first begin with imagery, they might only “feel” the moves and not necessarily be able to “see” everything that’s happening. That’s fine. As you practice imagery, your experience of it will become richer and richer. Just like developing a technique, imagery should become a routine of some kind, and not just be attempted once (IE: “Yeah, I tried that already.”).

Lastly, specificity is king when it comes to imagery. If at all possible, focus your imagery on a particular situation, tournament, technique or sequence. Simply imagining sparring and competing is vague, and is less likely to yield noticeable improvements. Is there one position you’d love to get better at? A particular tournament you’re committed to winning? Hone your mind precisely to those objectives. 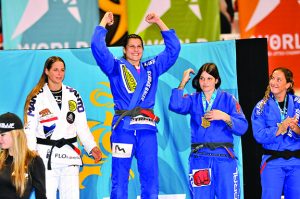 In closing, here’s a few simple ideas for ways you could implement visualization now to boost your own performance and development in combat sport:

Think about a specific position you need to work on, and dedicate yourself to visualizing reps of the techniques and strategies you’ll need to see improvement in that position. Try this for about five minutes each morning or before bed each night – for two weeks.

Bear in mind, you should ideally be working on a technique that (a) you understand and have a general “feel” for in “real life,” (b) a technique or sequence you have determined to be the most important for your overall development at this time. It is possible to work on curiosity moves or techniques you simply have an interest in, but getting the most bang for your “imagery buck” should involve focusing on high priorities.

Identify the competition or match of the highest priority to you in the next year. Dedicate a 10-minute span per week (or more than once a week if possible) to quietly sit and imagine yourself competing and winning in that particular event (think about the venue, the rules, the opponents you know you might face, etc.).

For example, if you are competing in a NAGA tournament at the end of the year, you’ll want to brush up on your NAGA rules and regulations, as well as time limits, weight classes, and likely opponents. Past experience and (even better) video recordings of past opponents will much better prepare you for accurate imagery with regards to fighting specific opponents.

Implement a habit of visualizing victory the night before any given tournament or match. Vividly see yourself winning, using the strategies and moves you know to be best – exemplifying a great performance and coming out on top. 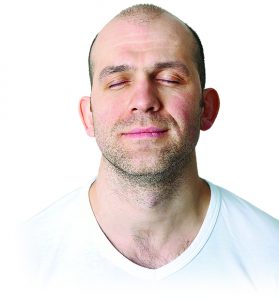 As mentioned before, visualization is a skill, and like any other skill, it requires diligence to learn well. Initially, you may just see a swirl of limbs in your mind’s eye, with no “feel” for the position, no detail in the opponent’s faces, no ability to continuously “see” a full minute of grappling action. With time, this will improve in both accuracy and validity, and there’s no better time to get used to practicing this habit than before a match.

Armed with these ideas, I hope you’ll begin by at least blocking off one stretch of time per week to practice visualization (after training is often when your brain lets you “replay” your rolls most easily) – and leverage the key tips that will make the practice effective. You can’t always be on a real mat practicing, but developing this skill will give you the ability to roll out the “mental mat” whenever you feel like it.

Kenny “Ken Flo” Florian His Own Brand of Flow

Abu Dhabi Grand Slam London: In Talent-Stacked 55kg Division, Ana Rodrigues is Ready to Battle For Her Fourth Gold Medal in the 2019/2020 Season

Dan Faggella is the #1 Amazon Bestselling author of the new book “BJJ Techniques to Defeat Bigger, Stronger Opponents.” He is also a no-gi Pan Am champion, absolute division medalist, and writer for over a dozen online and offline publications. Dan’s #1 book can be found on Amazon, and the print version of the book will soon be available as well. To learn more about Dan’s book, or to see some videos from his free video series on submitting bigger opponents, please visit: www.MicroBJJ.com/Book
One Comment