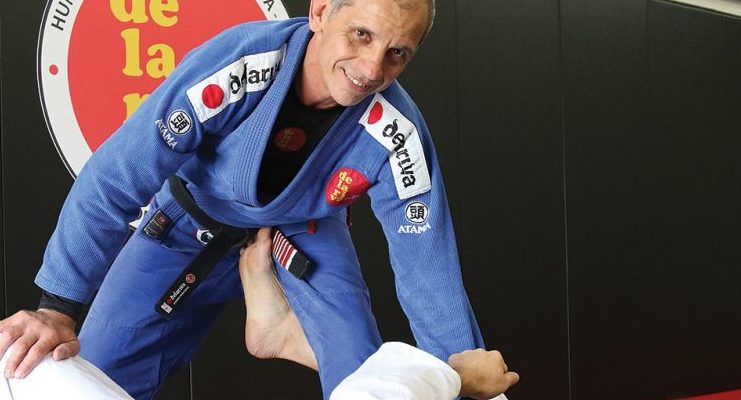 TEAM/ASSOCIATION: Fought for Academia Carlson Gracie, but has formed his own team as a coach

It is often said that imitation is the sincerest form of flattery. Well then, how about if an entire community universally acknowledges a particular position and names it after you? How would that rank on the flattery meter? Well, that’s exactly what happened with one Ricardo De La Riva Goded. I’m sure that the last person to ever think that something of this magnitude ever happening would be DLR himself. Chances are anyone who has practiced jiu-jitsu long enough (especially in a competitive environment) are sure to have heard of the De La Riva guard at some point. It’s that open guard with its pesky hook that can make any guard passer’s life miserable if they haven’t spent enough time learning about it. As you will come to understand, De La Riva is very humble and modest about being acknowledged as the pioneer of this type of guard and will be quick to tell you that he didn’t invent it. But what can you say about an individual who becomes so proficient at something to the point where that hook gets named after you? Well, at the very least, I think it would be nothing short of flattering.

Growing up in Rio de Janeiro, Ricardo, along with his brothers, liked to spend some of their past time playing soccer on the beach. It was here in which Ricardo would eventually be lead from the sand to the mats. While playing soccer with his brothers, another group of guys came over and insisted that the brothers allow them into their game. After one of Ricardo’s older brothers tried to explain to the guys that they wanted to just keep the game amongst the brothers, the newcomers didn’t seem to take rejection too well and made it clear that if they wouldn’t let them into their soccer game, that they were prepared to escalate to an all-out brawl against the brothers. With this, the brothers begrudgingly took their call and were essentially run off the beach.

Upon returning home, the brothers explained to their father what had happened, and like most fathers, he sent his boys a message that they will never again run from a fight. Ricardo’s father, at that time, was familiar with the Gracie family and was a fan of the legendary Carlson Gracie and followed through with empowering his boys by enrolling them into Carlson Gracie’s Jiu-Jitsu Academy so that if the boys ever had to defend themselves, they would be equipped to do so. It’s great to note that Ricardo has never had to use his jiu-jitsu in a street fight.

Although Ricardo was able to attain his black belt in six years, he is not what you would consider an intimidating presence. So it would be easy to assume that he was not the biggest guy on the mat at any given moment. It was because of this reality that Ricardo was forced to adapt. He states that once he started jiu-jitsu, he took to it immediately, enjoying the art and quickly realized that he had very good flexibility and began to earn a reputation within his academy as someone who had a very hard guard to pass. Considering that this assessment was from the practitioners within the Carlson Gracie Team, that was quite the compliment. As Ricardo explains, Carlson’s academy were big guys that took pride in their takedowns and guard passing abilities. Eventually, it got to the point where many of the guys from the academy would ask to see if they could pass his guard. It was through this constant exercise that he would have the opportunity to continuously develop his guard. It wasn’t until towards the end of being a brown belt and the beginning stages of receiving his black belt did Ricardo really begin to realize the effectiveness of “the hook” that he would use in his guard. He began to notice that everyone that was trying to pass his guard would have troubles merely keeping their balance, which would, in turn, create many opportunities for Ricardo to either sweep or submit his opponents. His training partners affectionately coined his guard play as “Guarda Pudim” (Pudding Guard) for his ability to continuously keep his opponents off balance. It was through world-class competition against the likes of Royler Gracie that Ricardo was able to effectively put all of his developments of his guard to task. So well, in fact, that the Brazilian media eventually coined the way he used the guard position as what we all now commonly refer to as the “De La Riva Guard”.Ricardo has had the opportunity to work with some of the greatest jiu-jitsu fighters to have ever competed in MMA (such as the Nogueira brothers and AndersonSilva). He credits the massive amount of work that was done in the gi as the reason that fighters he has worked with are able to excel at the highest level of the sport. However, Ricardo mentions that the DLR guard is a very good guard for everyone of all body types and skill levels to use. He also is appreciative of the younger generation who has taken a method that he has made popular and elevated it to the highest level through practitioners such as the Mendes brothers, who he feels are the top practitioners using the DLR guard. He even acknowledges that they are better than he ever was at using the guard.

We joined Ricardo to chat with him and he was eager to show us a few techniques from his now-infamous DLR guard and included a few new wrinkles to attack the DLR and some counters using the DLR. We are honored that we were able to perform what will go down in history as his last photoshoot as a black belt. By the time that this issue hits print, Ricardo will have achieved his coral belt. Time to train.

Passing the DLR Guard From Standing

Check out more techniques and our full interview with Master De La Riva on our YouTube page.

Getting The Most From Your Adrenal System