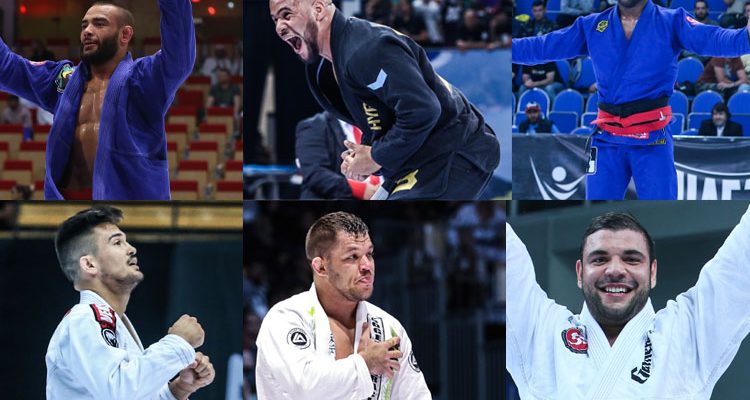 The Abu Dhabi King of Mats is going to Brazil to crown three new champions in the lightweight, middleweight and heavyweight divisions. The title matches are scheduled Saturday, November 2, at the Arena Carioca 1, during the weekend of the Abu Dhabi Grand Slam Rio de Janeiro. Here’s how each of the finalists made their way to the title matches.

Leonardo Saggioro is the current ADKOM lightweight title holder. He won the crown in Abu Dhabi, during the 2018 ADWPJJC in a surprising and brilliant campaign. He beat Samuel Canquerino, Hiago George, Isaque Paiva and José Lima in the group stage. In the semifinal, Saggioro beat Thiago Marques to meet American Gianni Grippo in the title match. After a 0-0 tie, Leonardo beat Gianni Grippo by referees decision to claim the title.

American Isaac Doederlein relentlessly pursued the chance to fight for the ADKOM title. He came second in the lightweight bracket in London, on March 2019, losing to Paulo Miyao in the final. In July 2019, Isaac was back on the mats in Tokyo for another chance for a shot at the crown. In Japan, he finished four out of five of his opponents. In the group stage, Isaac caught Thiago Macedo with an armbar, beat Diego Batista 3-1 and finished Tomoyuki Hashimoto with another armbar. In the semifinals, Isaac used his armbar setup to finish Cleber Fernandes. The final step was catching Gabriel Sousa with a foot lock. Isaac got his chance to fight for the crown after Paulo Miyao forfeited the spot due to injury.

Charles Santos is the reigning middleweight Abu Dhabi King of Mats champion. He won the crown in the ADKOM’s inaugural event, on April 2018, during the ADWPJJC. In a very tough bracket, Santos left behind big names such as Andre Galvão, Roberto Satoshi and Clark Gracie, among others. In the semifinals, Charles beat Renato Canuto by referees decision and met up with Jaime Canuto to win the crown with a 1-0 lead on advantages.

Isaque Bahiense is another ADKOM veteran. He competed in the second edition of the middleweight bracket, on January 2019, in Abu Dhabi, coming up in second place after being stopped in the final by Gabriel Arges. He went back into battle on August 2019, in Los Angeles, and once again made it to the final after a brilliant campaign. A setback to Gustavo Batista meant that Isaque had to settle for second place once again. Bahiense will be in the title match in Rio after Gabriel Arges was not able to compete due to injury.

João Gabriel Rocha secured his chance to compete for the crown with a robust campaign in the ADKOM bracket, on June 2019, in Moscow. He beat Gerard Labinski 5-0, got caught in a guillotine by Kaynan Duarte, but bounced back with a 1-0 lead on advantages over Igor Sousa and a toehold on Jackson Sousa. In the semifinals, João beat young gun Jonnatas Gracie 3-0. In the final, João beat Kaynan 1-0 to claim the first place.

Jackson Sousa inherited the spot to compete for the ADKOM crown after Erberth Santos forfeited the spot. Jackson is a veteran in tough battles and has never shied away from a challenge. On September 2018, in Los Angeles, he made it to the ADKOM heavyweight bracket final after beating tough opponents such as Alex Cecconi, Gerard Labinski, Rudson Mateus, Ricardo Evangelista, among others.

The title matches for the Abu Dhabi King of Mats kick off at 5:00PM, on Saturday, November 2, at the Arena Carioca. Click here for more info about the Abu Dhabi Grand Slam Rio. Follow the complete coverage on Instagram at @ajptour and @jjwplus. Be a part of the show by posting your experiences on social media using the hashtags #abudhabigrandslam, #adkom and #adgsrio. Watch the matches live at AJPTV.

Abu Dhabi Queen of Mats: Six of the Toughest Competitors in the World to Clash in Rio for the Inaugural ADQOM Lightweight Crown