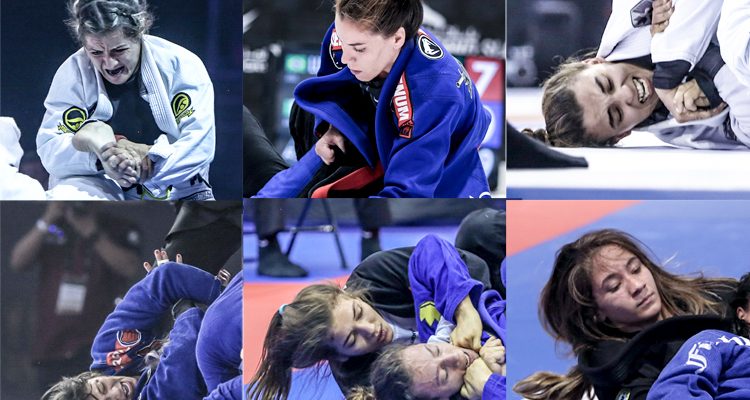 Abu Dhabi Queen of Mats: Six of the Toughest Competitors in the World to Clash in Rio for the Inaugural ADQOM Lightweight Crown

The AJP Tour is proud to announce the first edition of the Abu Dhabi Queen of Mats. The inaugural event will bring together six of the toughest and most accomplished female competitors in the lightweight division (under 62kg).
October 15, 2019 by Ivan Trindade

The AJP Tour is proud to announce the first edition of the Abu Dhabi Queen of Mats. The inaugural event will bring together six of the toughest and most accomplished female competitors in the lightweight division (under 62kg). The ADQOM will kick off on Friday, November 1, as part of the program of the Abu Dhabi Grand Slam Rio de Janeiro, at the Arena Carioca 1.

The incredible roster of competitors includes several ADWPJJC champions as well as multiple ADGS gold medalists in recent seasons. It’s a sure thing that Ana Talita Alencar, Mayssa Bastos, Bianca Basílio, Amal Amjahid, Luiza Monteiro and Ana Rodrigues will deliver nonstop action and the highest level of skills on every single match all the way to the crowning of the first ever Abu Dhabi Queen of Mats. Here’s a little more about each of the competitors.

Ana Talita Alencar (Brazil) – The 2017 ADWPJJC champion in the 55kg weight class will be in Rio to prove she is still on the top shelf when it comes to her performance on the mats. Ana Talita is known for her relentless pursue of dominant position to create the chance to submit her opponents. She’s a great addition to the roster of crown contenders.

Mayssa Bastos (Brazil) – Competing at the 49kg division, Mayssa is virtually unbeatable. She is the only athlete to have won gold medals at the ADWPJJC since the weight class was introduced in 2017. One of the most active black belts in the AJP Tour, Mayssa is not afraid of challenges and will face heavier opponents head on.

Bianca Basilio (Brazil) – A two-time ADWPJJC brown/black belt champion (2018/2019), Bia Basílio brings with her all the credentials she needs to be considered a top contender for the crown. No opponent is safe from her fierce attacks to the legs and feet. It will be no surprise to see Basílio among the final four in the semifinals.

Amal Amjahid (Belgium) – Amal shocked the world while still a brown belt when she made it to the top of the podium at the 2018 ADWPJJC, defeating much more experienced black belts in the 55kg division. Since then, she has maintained a steady flow of great results at AJP Tour events. Winning the crown in Rio will certainly be one of Amal’s greatest moments on the mats.

Luiza Monteiro (Brazil) – Another heavy hitter, Luiza Monteiro has won almost everything. With an aggressive style that includes pressure passes and strong submissions, Luiza wants the crown to make her collection of trophies even richer. Fresh from a gold medal performance at the ADGS Los Angeles, who doubts she has the talent and will power to do it.

Ana Rodrigues (Brazil) – Recently promoted to the black belt ranking, Ana Rodrigues gained a lot of experience competing against black belts in the AJP Tour on her brown belt years. The gold medal at the AGDS LA is proof that she is ready for bigger challenges. Ana has said many times that she has a loving relation with Jiu-Jitsu. In Rio, she hopes to have a happy ending to another chapter of that love story.

About the Abu Dhabi Queen of Mats

Just like the Abu Dhabi King of Mats, the Abu Dhabi Queen of Mats introduces a new and very exciting format of competition. Athletes are divided in two groups and they fight each other inside their groups. At the end of the group stage, the two athletes with the best campaigns in each group advance to the semifinals to fight for a spot in the final. The event closes with the third place match and final. All matches are six minutes long, which guarantees non-stop action and a high rate of submissions.

The Abu Dhabi Grand Slam Rio de Janeiro is the fourth event in the 2019/2020 ADGS season. It’s scheduled November 1-3, in the Arena Carioca 1, at the Olympic Park. Click here for more info about the ADGS Rio. Follow the complete coverage on Instagram at @ajptour and @jjwplus. Be a part of the show by posting your experiences on social media using the hashtags #abudhabigrandslam and #adgsrio. Watch the matches live at AJPTV.