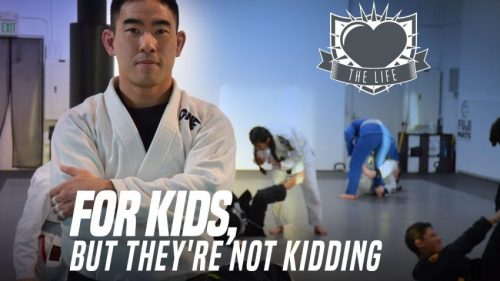 For the Kids, But They’re Not Kidding

The term triumph is defined as “a great victory or achievement”. In every story of triumph and breakthrough, it can be easy to forget that there is always a back story that predates that particular moment.  There is the unheralded side of the story that likely involves a group of people and/or a key figure that ushers in a way of direction and guidance, and most formative of those times often happen early, during our childhood years.

Enter Don Kim. His jiu-jitsu journey has been pretty thorough, to say the least, especially considering the quality of instruction that he has been exposed to while learning the finer details of “The Gentle Art”. A veteran in the U.S. Army, Don was introduced to jiu-jitsu through, none other than the legendary Relson Gracie while living in Hawaii. He continued his jiu-jitsu training when he moved back to the mainland and picked things up in Chicago under Adem and Eddie Redzovic. Don then moved again, westward bound, to California where he started training under Saulo Ribeiro, before settling with Giva Santana’s One Jiu-Jitsu Team.

Opening up his own academy in Redlands CA, it hasn’t taken long for Don to leave his mark on the jiu-jitsu community by providing a solid kids program that represents high-level principles and execution during competition. However, his approach is layers deep with a broader scope than the competition mats. He aims to equip the kids involved in his program with confidence and the ability to take on challenges through systematic self-discovery. One of the key components that Don touches on is assuring that the kids’ needs are addressed. He makes it a point to focus on the coaching staff and defining their roles so that there is a team effort and common goals. Seems like his approach is working.

We had the chance to catch up with Professor Kim at his Redland’s academy and drop-in on one of his kids classes to see him in action. Here is Don opening up briefly about his background and his approach.

Streetwear and Jiu-Jitsu – A Short Dissertation