Michelle Nicolini Edges Out Angela Lee in ONE FC Showdown 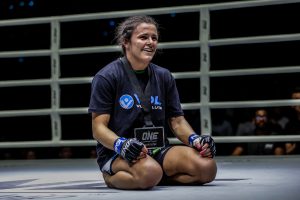 In the main event of the evening, Italian-Armenian kickboxing icon Giorgio “The Doctor” Petrosyan advanced to the semi-finals of the ONE Featherweight Kickboxing World Grand Prix after defeating Thai legend Petchmorakot Petchyindee Academy by unanimous decision. Petrosyan was aggressive all throughout the three-round contest as he stormed Petchmorakot with crushing combinations to secure the decision victory. Petrosyan advances to the semi-final round of the tournament and will now face ‘Smokin’ Jo Nattawut in a highly-anticipated rematch at ONE: DREAMS OF GOLD in Bangkok, Thailand.

In a women’s strawweight co-main event, two of the world’s best grapplers put on a show as eight-time Brazilian Jiu-Jitsu World Champion Michelle Nicolini of Brazil scored the biggest win of her ONE career, defeating ONE Women’s Atomweight World Champion “Unstoppable” Angela Lee of Singapore by unanimous decision. Nicolini was relentless in her takedowns as she repeatedly grounded Lee and controlled her on the mat. “Unstoppable” had her moments as she put her Brazilian foe in some precarious situations, but in the end, it was Nicolini who was hailed the winner after three grueling rounds.

Malaysian former world title contender Ev “E.T.” Ting sent the Axiata Arena into a frenzy after scoring a fantastic second-round submission win over former Pancrase Welterweight World Champion Daichi Abe of Japan. Ting survived some early trouble after getting rocked in the first round and rallied to take control of the bout. In the second round, Ting was able to catch Abe in a deep rear-naked choke to force the tap and return to his winning ways.

Malaysian hero Jihin “Shadow Cat” Radzuan returned to the winner’s circle in spectacular fashion with a first-round submission win over Jomary “The Zamboanginian Fighter” Torres of the Philippines. Radzuan weathered an aggressive opening round from Torres to take the action to the ground and lock in a deep triangle choke. Torres tried to power out of the submission attempt but ultimately tapped out to give Radzuan the comeback win.

American wrestler Troy “Pretty Boy” Worthen was dominant in his ONE Championship debut, stopping previously undefeated “The Ghost” Chen Rui of China via second-round technical knockout. The former NCWA Wrestling Champion showed off his excellence on the mat as he grounded Chen and punished him from the top with strikes. Worthen took Chen down once more in the second round and dished out more punishment to secure the stoppage win in his maiden ONE appearance.

Top-rated Finnish mixed martial arts star Aleksi “The Giant” Toivonen made his ONE Championship debut a triumphant one, posting a thrilling first-round submission victory over opponent Akihiro “Superjap” Fujisawa of Japan. Fujisawa tried to stay on the outside to counter but as soon as Toivonen closed the gap, he was able to bring the action to the ground. On the mat, Toivonen swiftly transitioned into a rear-naked choke, forcing the tap.

Indonesian sensation Adrian “The Papua Badboy” Mattheis continued his streak in the ONE Championship strawweight division as he scored a scintillating technical knockout victory over opponent Li Zhe of China. As Li chased Mattheis across the ring in pursuit of a takedown, Mattheis picked him apart with explosive combinations. In the second round, Mattheis was able to take the action to the mat, where he unloaded his ground-and-pound to force the stoppage.

Check out the recap below along with the rest of the evening’s results.

Official results for ONE: MASTERS OF DESTINY

Abu Dhabi King of Mats: Isaac Doederlein ready to climb to the top of the lightweight bracket in Tokyo