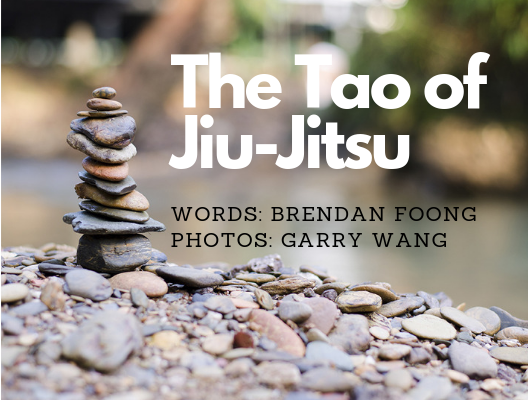 The Tao of Jiu-Jitsu

A famous Taoist parable goes something along these lines:

One day a farmer’s horse ran away. Upon hearing the news, his neighbors came to visit. “Such bad luck,” they said sympathetically.

The next morning the horse returned, bringing with it three other wild horses. “How wonderful,” the neighbors exclaimed.

The following day, his son tried to ride one of the untamed horses, was thrown, and broke his leg. The neighbors again came to offer their sympathy for what they called his “misfortune.”

The day after, military officials came to the village to draft young men into the army. Seeing that the son’s leg was broken, they passed him by. The neighbors congratulated the farmer on how well things had turned out.

And on it goes…

The parable reflects that life is uncertain and chaotic; don’t let the lows get you down or let the ups make you complacent. Nothing lasts forever and this is reflected in many cultural philosophies and religions such as Buddhism, Christianity, Stoicism, etc.

What has this got to do with jiu-jitsu? Let’s look at the parallels of jiu-jitsu to life: there is chaos, heartbreak, frustration, fear, ecstasy, elation, pride, and humility. We can manifest all of these experiences over the weeks, months, and years where some days we think we can go forever and other days we will wonder why we are ever doing this and what’s the point of it all.

Let’s look at some practical examples. As a white belt, you’re taught the Bullfighter Pass. When you first learn it, you’re intoxicated by the power you possess and the simplicity and effectiveness of the movement. It works well on your fellow white belt training partner and you feel like a superhero. Well you go and try it on your higher belt teammates and suddenly your movements are jerky and unrefined, your body doesn’t move the way the coach’s does, and when you try to execute it, your brain seems disconnected with your body. You see it being used in videos, and you see it being used in competition, and it seems so easy, but every time you try to execute, your training partner recovers their guard or manages to reconnect their feet to your hips thwarting each attempt at a successful pass. Does that make you bad at jiu-jitsu? Should you give up on trying it? No, it doesn’t. Each time you attempt it, a pattern of synchronization is developed and refined starting from the neural pathways in your brain to the transmission of electricity through your nerve endings onwards to the micro contraction of fast twitch muscles in your arms and legs and ending with the ligaments in your fingers onto your grips. Each attempt feeds information into your mental supercomputer informing your body how to improve the precision and intent of your movement.

On the flipside, you’re a purple belt and your go-to move is a Lasso Guard sweep. It’s been effective for you in training and in competition- basically you’re known for hitting it successfully, and it’s one of your signature moves. You develop confidence using it and every session involves you going to that technique as your main attack, but after a while, you begin to find it less effective and you’re plateauing. Your partners have begun visiting the University of YouTube and started developing counters and means to stifle your attacks. Suddenly you feel like you’re back to square one or, worse, you’re regressing. That’s never really the case though as the amazing thing about jiu-jitsu is that whatever time you spend on the mat is experiential currency and that only adds to your account and never depletes it. Jiu-jitsu is a race to see who can build up their experiential account faster than the other, the bigger account typically wins. Don’t allow hubris to lead to a stagnation in your development. A muscle develops strength and size by being put under pressure and uncomfortable situations, and so does your jiu-jitsu by experimenting with techniques outside of your comfort zone so you always have a Plan B, C, and D which can work as effectively as your Plan A.

In conclusion, take it easy on yourself, you’re human. You’re entitled to feel pain, hurt, and disappointment; however, don’t let that define you and give up when things get challenging. Conversely, don’t get stuck in a groove and become complacent even if your techniques always seem to be working. Someone around the corner has the solution to your game and you never know when you’re going to run into them, so you should always be learning.

I wish you all the best in your training.