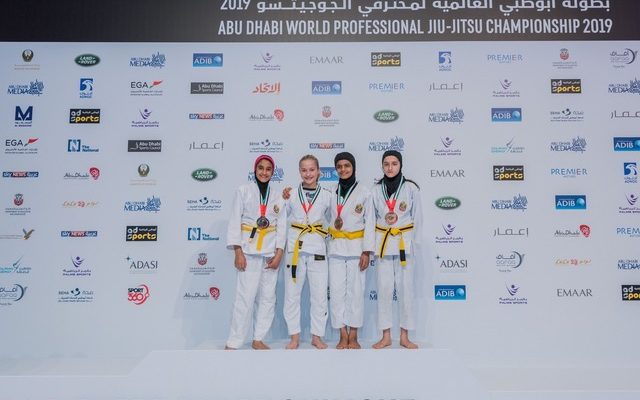 “His Highness spoke about how the Championship is improving every year and how the numbers increase year-on-year. His Highness said it was beautiful to see the progress we have made – it’s pressure for us but it’s also very inspirational for me and the whole team at the Federation,” said H.E. Al Hashemi.

“It was the dream of my life so far to win a gold medal and I’m so proud and honored to have been given my medal by His Highness Sheikh Mohammed bin Hamad bin Mohammed Al Sharqi – I feel this is an honor for the whole UAE.”

Al Balooshi’s medal was one of many as the UAE’s female youths produced powerful displays evoking the values of jiu-jitsu: tolerance, discipline, respect and determination. Amongst those demonstrating girl power was Shaikha Al Tamimi, 12 years, from Al Samha School, who took gold in the Junior, yellow belt, 75kg category.

“Winning the first place and the gold medal makes me feel like I was climbing a big mountain and I reached the top today, that was one of my ambitions. I did not expect to win and I’m so happy to get a gold medal I think my family will also be proud of me,” said Al Tamimi.

Hamdah Alkalbani, representing Abu Dhabi’s Al Wahda Club – Jiu-Jitsu Academy, was another Emirati youth to savour ultimate glory: “I am very happy to win first place and the gold medal,” said Alkalbani, 13 years. “I did not expect to win, but I have been training twice a day to be ready for this championship. I love Jiu-Jitsu so much, it teaches us persistence and respect – I encourage girls to join in this sport. I’d also like to thank my family who have been the biggest supporter for me.”

With high-intensity action on the mats underlined the growing popularity of jiu-jitsu amongst young females worldwide, Mr. Fahad Al Shamsi, Chief Executive Officer, UAE Jiu-Jitsu Federation, believes the UAE girls’ medals tally show the extent of progress being made at grassroots level across the country.

“The quality of results achieved show our youth programmes are among the best in the world and how our young women are embracing jiu-jitsu’s core values. The quality and level of action on display today illustrates that the future is extremely bright for women’s jiu-jitsu in the UAE and around the world. It is an honour for us to provide an arena for the girls to compete and continue learning,” said Al Shamsi.

“The girls raised the bar to an all-new high today and we are confident the boys will follow suit in what is always one of the most hotly-contested categories of the entire week,” said Mohammed Hussein Al Marzooqi, Director of Marketing and Finance at the UAEJJF and Director of the ADWPJJC.

The ADWPJJC 2019 is held under the patronage of His Highness Sheikh Mohamed bin Zayed Al Nahyan, Crown Prince of Abu Dhabi and Deputy Supreme Commander of the UAE Armed Forces.

Putting the Academia in Academy