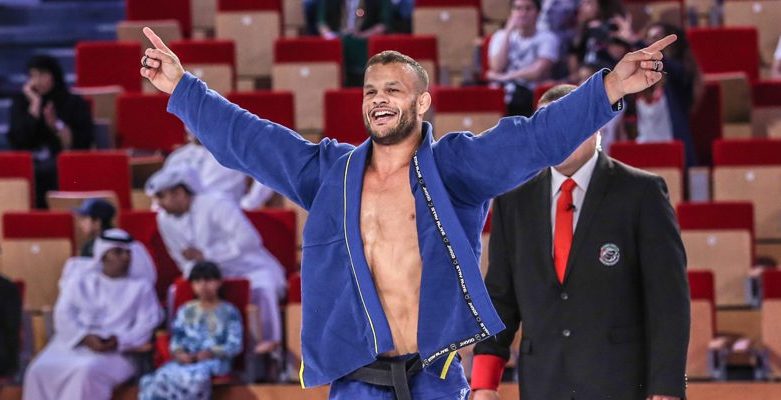 Day 4 of the 2019 Abu Dhabi World Professional Jiu-Jitsu Championship shifted into high gear as the master black belt division entered the Mubadala Arena for the pleasure of the crowd, this Tuesday, April 23. Experienced competitors with 30 years of age or more gave all they had in search of the ultimate glory and also their share of hefty money prizes. Here is how each weight class played out in the Masters 1 black belt division.

56kg – Portugal’s Juan Lopes da Silva fought four times in an all against all bracket. He beat three of his opponents, two by submission to finish the bracket in first place. Brazil’s Jorge dos Santos finished second and Brazil’s Albert Santanna completed the podium in third place.

62kg – In four matches, José Barros made his way to the top of the podium. In the final, he met up with local talent Musabbeh Al Khateri, who fought twice to reach the gold medal match. The title was decided when Barros caught Khateri with a choke from the back.

69kg – Thiago Marques fought three times to claim the gold medal in the division. He finished two of his opponents and met up with the UAE’s Talib Saleh to fight for the title. A 2-1 lead on advantages after a 2-2 tie on points granted Thiago the top of the podium.

77kg – Sergio Rios made his way to the title in four matches. The final challenge was Chile’s Pierpaolo Chiappe. Rios worked his game efficiently to build a 8-2 lead and secure the gold medal.

85kg – Three matches, three wins, two submissions. That’s how Marcos Tinoco built his path to the gold medal in Abu Dhabi. In the final, he beat Australia’s David Willis 6-0 with a powerful top game to finish the 2018/2019 season in high fashion.

94kg – Renato Cardoso had to go through an all against all bracket and walked out of it with a perfect record. He beat all of his four opponents, three by submission. The final opponent was fellow Brazilian Melksedec Franco. A wrist lock was the finishing touch on Renato’s campaign for the gold medal.

110kg – Igor Silva fought twice to become the champion. He first finished Ricardo Evangelista in the semifinal to face Antonio Junior for the gold medal. A unanimous referees decision after a 0-0 tie on points was enough for Igor to celebrate the title.

2019 ADWPJJC: Day 5 heats up as Brazilian Aces Fight it Out for a Spot in the Adult Black Belt Main Brackets