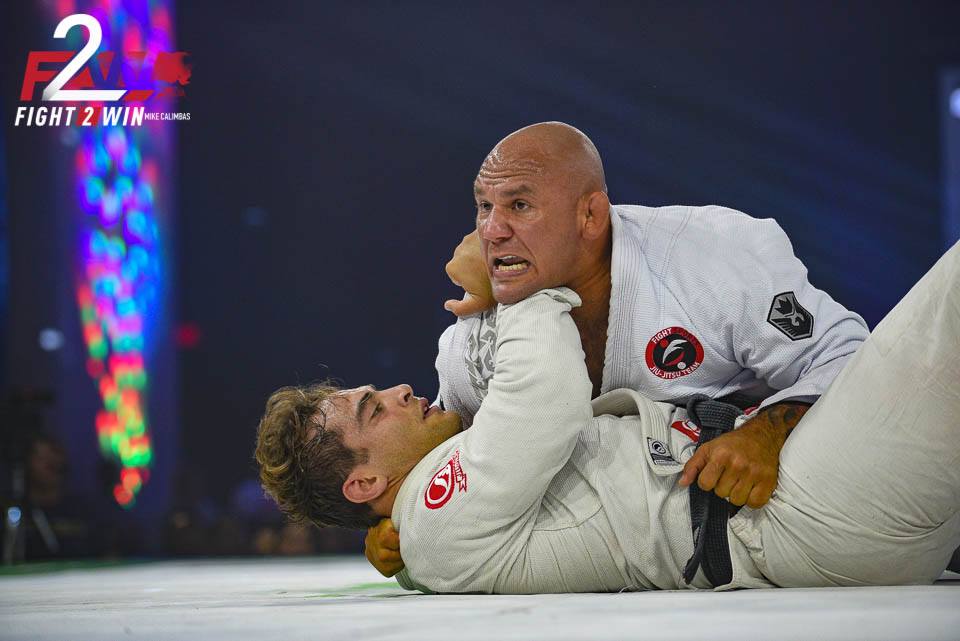 F2W 106 Shines in the Sunshine State

Fort Lauderdale FL – Miami may get most of its press because of the hit tv series, turned movie, “Miami Vice”, the Miami Dolphins, Celia Cruz and Gloria Estefan’s “Sound Machine”, but its also home to “Fight Sport”, which happens to be the home gym of one-half of the evening’s main event. And just a quick thirty-minute drive north, you get the less talked about but equally inviting and culturally rich Fort Lauderdale. Home of Fight 2 Win’s 106th event that kept South Florida’s reputation for heat alive and well. Below is a quick recap of the evening’s event that streamed live on FloGrappling. But as usual, you know we have your back on the recap, so let’s dive into the main event.

Highly decorated Check Mat stand-out Luiz Panza squared off against the what was considered the hometown favorite Roberto “Cyborg” Abreu of Fight Sport Jiu-Jitsu. The action didn’t take too long to get started as Panza immediately attempted to get right into his guard game and pulled guard. With Cyborg working hard for the pass, Panza kept up his aggressive attack and transitioned to the match’s first submission attempt with a leg attack against each of Cyborg’s legs. Cyborg was able to evade those attempts and immediately afterward, Cyborg smiled as he and Panza enjoyed a friendly verbal exchange in respectful recognition of the sequence that just took place. It didn’t take long to dive right back into the action as both men initiated a back and forth of reversals with high-level graceful aggression with Cyborg eventually landing on top and establishing side control. Keeping top control through the remainder of the match with always incredible movement, considering his size, Cyborg was able to nail his signature “knee on the neck” for a brief moment. Although Panza was able to rattle off for what could be considered the most significant submission attempts of the match, it was his relentless control and top pressure that seemed to sway the judges with a very competitive unanimous decision. 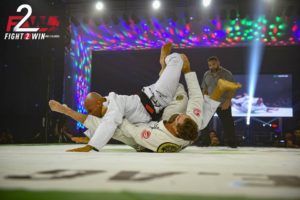 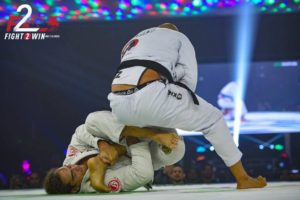 The co-main featured 2018 IBJJF World Champion Alliance representative Karen Antunes matching up against 2017 IBJJF World Champion Check Mat representative Talita Alencar with a F2W Flyweight belt on the line. Two very talented and highly aggressive competitors. Alencar wasted little time, beginning the match with a snap down attempt, chaining it together with a guard pull and a leg attack. But it didn’t take long for Karen to flip the table on Talita’s leg attack to counter with her own to make Talita abandon and defend. As the match eventually made it’s way back to standing, Karen brought it right back down with a crowd-pleasing flying triangle attempt that, at one point, looked that it could’ve been locked in to end the match. But Alencar was able to escape the attempt and eventually pull off a sweet sweep that earned her the top position. With close to four minutes left in the match and Antunes pushing the pace, Alencar sprung an unexpected kneebar attempt of her own that gained Antunes’ attention and shifted her focus to defense. After a back-and-forth in 50/50 guard, both competitors found themselves back on their feet with a little less than two minutes left in the match. But the most tense moment of the match came when Antunes jumped guard, Alencar’s left knee buckled in a very odd angle on the way down. With no visual signs of injury after the match, the match ended with both ladies still attempting attacks. In a very exciting and tough match, it was Check Mat’s Karen Antunes that brought home the F2W Flyweight belt with a unanimous decision. 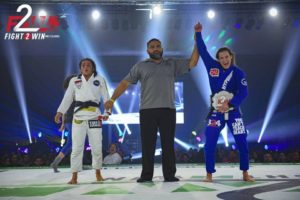 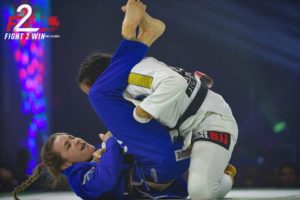 In another title fight, the Masters black belt Welterweight Title was on the line as Rafael Formiga Barbosa faced off against Alexandre Pulga Pimental. Both players known for their effective guard games wasted little time going to the ground with Pulga pulling guard on Formiga. Early on it looked as if Formiga was able to get half mount and started attacking with an Ezekiel/head and arm choke attempt. With Pulga on the bottom constantly throwing up attacks Formiga was able to control the top position and keep the pressure on Pulga to eventually execute a knee slice pass. With a little more than two minutes left on the clock, Formiga attacked Pulga’s arm, which started the downward spiral for Pulga eventually catching him in a crucifix choke to secure the submission of the night and retain his master’s welterweight belt. 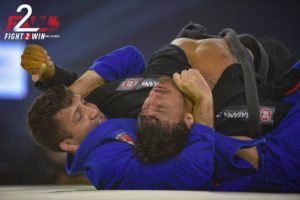 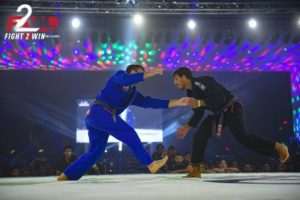 Fight to win continued its effort to bring back old school judo rules on their platform, featuring three very exciting high-energy Judo matches. In this match, that was deemed one of the evening’s “fights of the night”, we saw 2012 World Team member Nathan Kearney face off against Fight Sport’s Oscar Rosa. After a brief grip fight exchange, Kearney dropped down to kick off the action with a Kuchiki-taoshi (single leg) but was unable to control the entire throw. Rosa was able to quickly recover and get back to his feet.  Kearney was unsuccessful with an attempted a Tai-otoshi which brought the action to the ground. Keeping on the attack Kearney then went for a Kata-guruma (fireman’s carry), which Rosa was able to quickly counter with his own Sumi-gaeshi scoring an ippon with the action quickly finding its way back to standing. Kearney returned the favor scoring an ippon of his own with a Morote-gari and finding himself in Rosa’s guard with Rosa attempting an Ezekiel choke. Things got really exciting when the action spilled off of the mats and they had to be caught by the referee Seth Daniels. They were quickly reset to center mat. The match quickly ended when Kearney scored his second ippon by stringing together a Tsuri Goshi attempt and quickly changing to a Yoko-otoshi and securing the match via ippon. 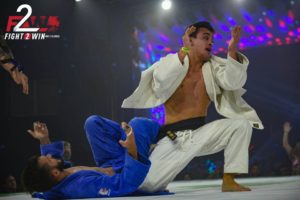 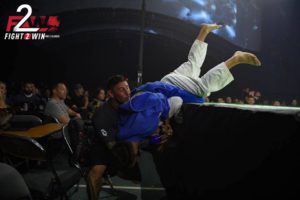 With another event in the books, Fight2Win is continuing the party with its next stop in Tynsboro, Massachusetts on April 6th. You can catch the live stream on FloGrappling and, as usual, we will be here with the recap. Here are the rest of the evening’s results.