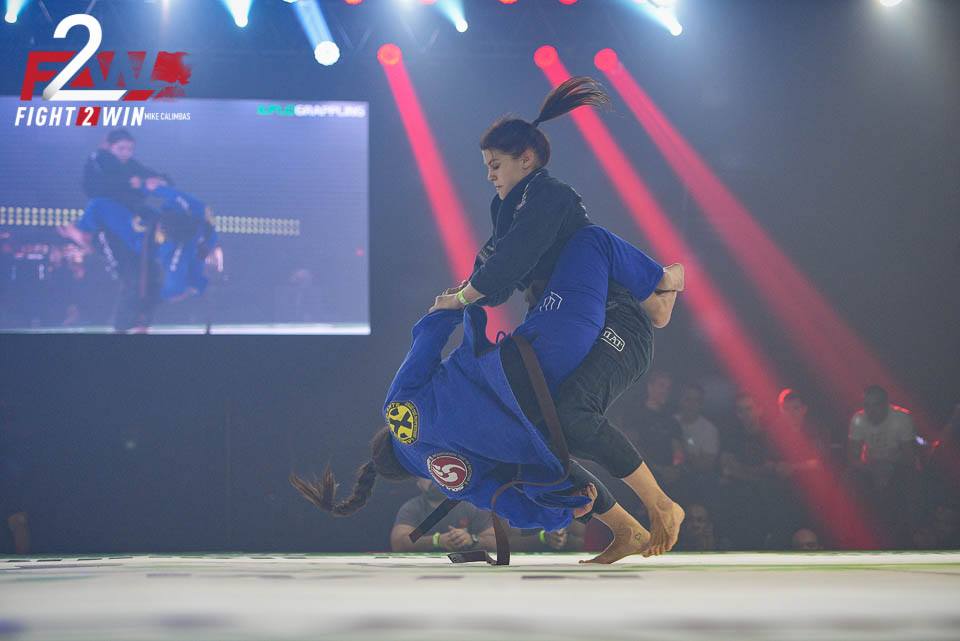 Dallas TX – As the Second Largest State in the United States, and a state that is bigger than most nations, no wonder Fight2Win is still in Texas.  And if it were a nation, It would probably rank the 40th largest country in the world. It was a large crowd at F2W104 with an exciting line-up that leads up to the main event: Rafael Lovato Jr. against Yuri Simoes. There were a lot of exciting matches but here are a few highlights of the night.

If you missed last night, no need to worry. We’ve got you with a recap of the evening’s highlights and a complete listing of the match results.

The main event features Rafael Lovato Jr. vs. Yuri Simoes. Rafael is the number 1 ranked light heavyweight and returns as a 2 time Fight2Win Champion.  Yuri Simoes is a 2x ADCC Champion and an IBJJF World No-Gi Champion (2016). They waste no time dancing around and lock on to each other trying to take each other down.  Yuri uses a body lock to take the fight to the ground. Rafael plays his guard making it difficult for Yuri to pass. The match is about halfway through and the guys are back on their feet. Yuri takes it back to the ground and attacks the leg making it the first solid submission attempt in the match.  He holds onto it but Rafael remains calm and gets his leg out. In the last minute, Rafael attacks the leg and Yuri returns the favors and attacked the leg as well. Yuri is able to hold the leg until the end but no submission is made. Yuri Simoes wins by unanimous decision. 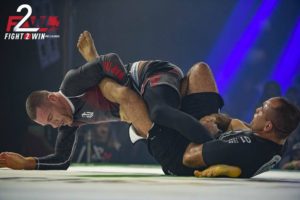 The co-main event features Brazilian Manuel Ribamar against DJ Jackson.  DJ Jackson is a 8x world champion and Manuel Ribamar makes his Fight2Win debut ranked as #3 Middleweight in the world.  The men lock into each other right away attempting to take each other down as Manuel pulls guard on DJ. DJ attempts a body slam, however, Manuel doesn’t flinch and continues to try to work on the bottom.  DJ stays low which makes it difficult for Manuel to work his guard as DJ continues to attempt to pass his guard. Ribamar attempts a loop choke but DJ gets out of it. The submission attempt is the first and with 5 minutes left on the clock.  The match continues with Manuel playing guard and DJ attempting to pass his guard and staying low. As the time approaches the 1-minute mark, DJ attempts 2 more body slams. Manuel Ribamar wins the match by decision. 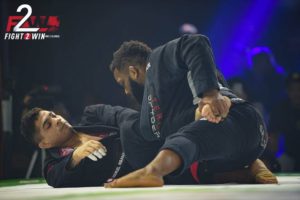 Talita is a 2x Pan American Champion and Nathiely Karoline is a 5x World champion. Nathiely brings it to the ground by sitting. Nathiely uses her guard and climbs up to top position but Talita doesn’t seem to mind.  Nathiely uses a series of attacks and forces Talita to turtle and takes the back. Nathiely attacks the neck but can’t complete the submission as Talita gets out.  Nathiely attempts a triangle and Talita pulls back. They try to find a submission in each other’s feet, but no luck. Nathiely takes Talita’s arm while she is in her guard and switches to a triangle as Talita tries to roll out.  Talita manages to get out and attempts to sit back for an ankle lock. Nathiely takes the back at a minute and a half left and takes the lapel and finishes it off with a choke. 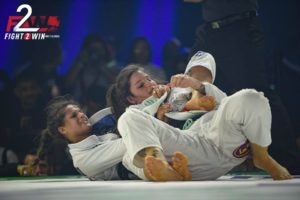 This match featured fluid movements with attacks and counters with both competitors moving skillfully.  Kyle takes the fight to the ground as Tony takes top. Tony makes attempts to take the back as he seems comfortable doing so. Kyle chucks him off his back over making Tony tumble over. Back to the ground, Kyle continues to move smoothly with Tony looking for control of the back. Kyle reads his movements and removes grips and remains aware of his neck. Trying to take the back and get back control, Kyle gets out and attempts a front guillotine but Tony spins out. Once again, Tony goes around to the back and Kyle throws him off but Tony shows incredible balance with catching himself and back up right away.  One minute left and Tony plays the back control game and spins to a guillotine. It ends into referees decision with Tony as the winner. 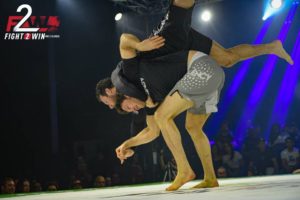 Seth Daniels enters the competition mat with a broken right hand. Is he crazy? Probably. His opponent, Jorge Perez from Zombie Krew Jiu-Jitsu. This match did not disappoint though. Right away we have a Kimura attempt from Seth Daniels but Jorge recovers nicely and takes the top.  Seth sets up his half guard and attempts the electric chair but Jorge controls his head keeping Seth from taking the top to apply more pressure. Halfway through it ends with Seth submitting Jorge with a toe hold. 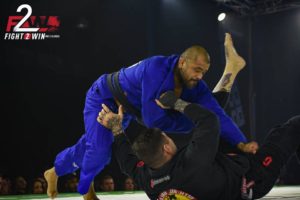 Those were some of the highlights from the evening series of events. Here are the complete results of the evening. Don’t forget to tune in to F2W105, March 16th in Tulsa, OK. We will have a recap for you so you don’t miss a beat from the biggest party in grappling.

Abu Dhabi Grand Slam London: See Who the Black Belt Champions are in the Season Closer