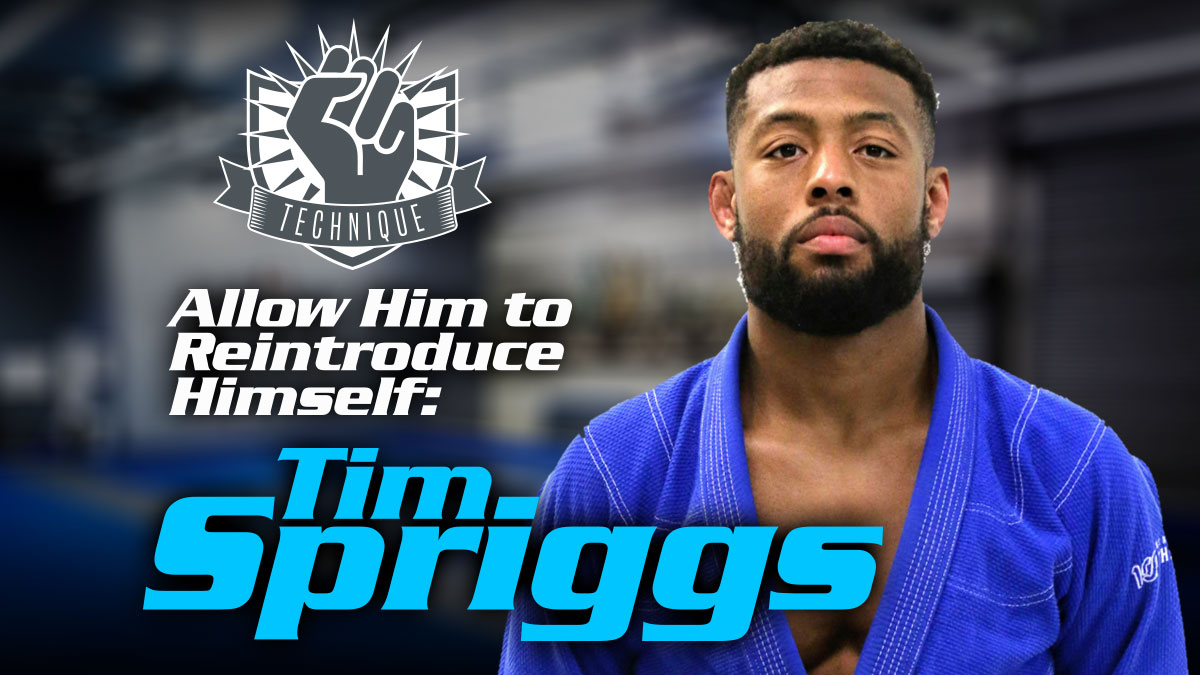 Allow Him to Reintroduce Himself: Tim Spriggs

Evolution is paramount in life. At its core it’s an implication on what we view and consider, “improvement”. To look at what an 1890’s era TELEphone looks like in relation to a CELLULAR phone of today. You would think that they serve two completely different purposes. However, that’s not entirely untrue when we consider how far the phone has evolved, in not only its primary function but its overall capabilities. So evolution looks different across the many landscapes in which it takes place. Ask anyone about the physical capabilities of athletes of the past in comparison to the abilities of the current day athletes. And THAT my friend, is what can be presented as a representation of “evolution”.

Keeping on the topic of evolution, techniques tend to evolve as well. In the neverending cycle of attack-defend and counter-attack, it’s that cycle that nurtures, breeds and is the base ingredient to evolution. Even if the technique and approach necessarily may not have, what we would consider evolved, the manner in the way it’s executed can be the identifying factor. To this notion, I point to one Tim Spriggs.

Tim employs a high-pace, high-pressure style and is not afraid to impose his ability to execute those elements. However, it’s also his ability to set things up with what he calls “misdirection” and mindfully calculate where his opponent will move, only to immediately exploit his opponent’s decision to move in the way that he subliminally “suggested” they move, or as he likes to describe, “ask the question” to his opponent (that he already has the answers to), and as they attempt to answer, he’ll quickly “ask another question”, keeping them in a form of mental overload. I would consider that an evolved way of executing basic notions.

Having racked up a catalog of victories in multiple events, it was actually on a moment where he didn’t secure the top prize at the “Ultimate” Pans of 2015. Being one of the smaller men in the bracket, he was able to make a solid representation of himself, earning (and we mean earning) bronze in the absolute division and sharing the podium with Andre Galvao, Leandro Lo, and Bernardo Fairia. It was at that moment that he knew he belonged among the world’s elite. So as we head into the 2019 IBJJF Pans, allow him to reintroduce himself, his name is Tim Spriggs.

In this sequence, Tim shows us one of his favorite passes that, on the surface, seems to defy common rules of keeping your hips low and your base low. Instead, Tim will do just the opposite in this clever pass that allows him to disconnect from Mahamed’s guard to quickly reconnect in a more dominant position of control.

Here, Tim elects to show us his other favorite pass that is a nice option that complements the previous pass and fits right into his overall style of “asking his opponents” those questions to only ask them another one while they’re answering the previous.

Everyone hates falling victim to wristlocks! But are you here to make friends? Or are you here to be the ultimate submission specialist who can pull off any submission from anywhere? Yeah… Learn this wristlock. You can thank Tim the next time you see him for his contribution to your formidable arsenal.

Fighting Away From Home: Travel Tips For the Jiujiteiro

Abu Dhabi Grand Slam London: See Who the Black Belt Champions are in the Season Closer