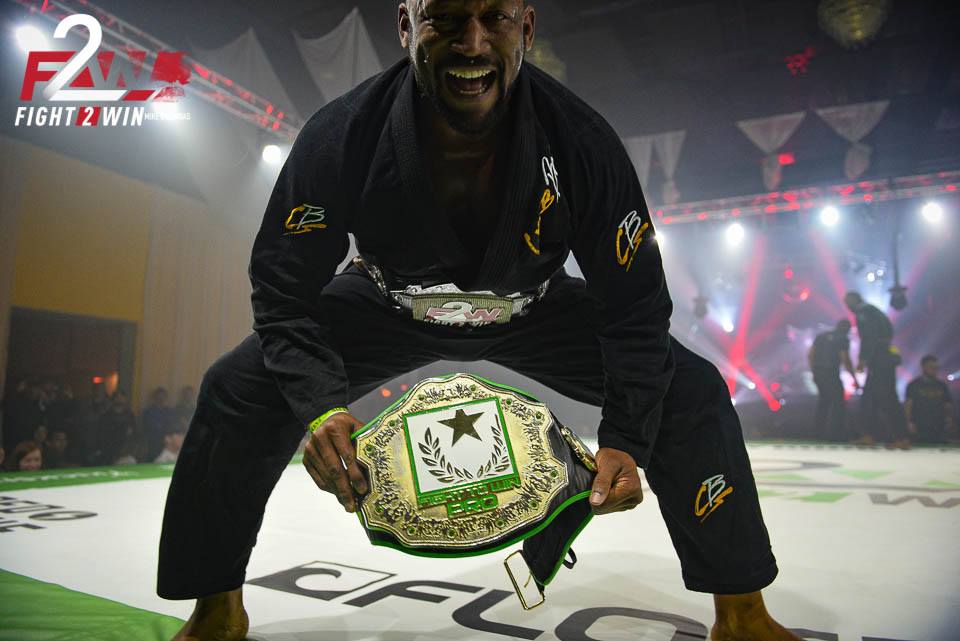 Houston, TX – When you mention Houston Texas, you think of everything being big. Well, you can now chalk up Fight2Win 103 as another big thing that just took place in Texas. The biggest party in grappling showcased another night of exciting jiu-jitsu and continuing their “old-school rules” judo feature match. F2W103 also heralded in a gi heavyweight title main event between Gutemberg Pereira defending his title against Alexandro Ceconi and ushered in the return of five-time IBJJF World Champion Hannette Staack taking on Tubby Alequin in a gi featherweight title.

F2W continues its stay in the Lone Star state. Next stop, F2W104 in Dallas Tx. If you can’t be there to see it there live, check out the livestream on FloGrappling.com and be sure to come back here for a summary recap of all the action that took place.

In a match that showcased two champions. F2W heavyweight titleholder and GF Team standout Gutemberg Pereira taking on F2W masters heavyweight champ and Texas native Alexandro Ceconi. The match started out with a brief fight for grips followed by Pereira pulling guard and quickly securing a closed guard. The match was a technical struggle that had Ceconi pressuring Pereira’s closed guard but eventually lending himself to a well set up sweep to give Pereira the top position and eventual pass. After a cat and mouse game with the lapels from the mount Pereira was able to slap on a slick triangle from the mount to keep it secured and roll onto his back securing the finish.

Alequin wasted little time to pull guard on Staack. in a struggle for a dominant position that developed into a trade-off of multiple leg attacks from both competitors. In what was a tough match that really didn’t have any clear moments of dominant control for either competitor with the verdict able to go either way, the judges scored a tight match for the returning Hannette Staack via unanimous decision.

In one of the evening’s spotlight matchups earning one of the F2W’s “Submission of the Night” recognition, Daniel Galvão faced off against Eugene Gutierrez. In a match that didn’t take too long to heat up, the fans were treated to a lightning-quick transition from closed guard, to open guard, to come out to the top position with a loop choke secured to grab the win just under the two-minute mark of the match.

Flo With the BJJ9000 Jiu-Jitsu Accelerator

Fighting Away From Home: Travel Tips For the Jiujiteiro