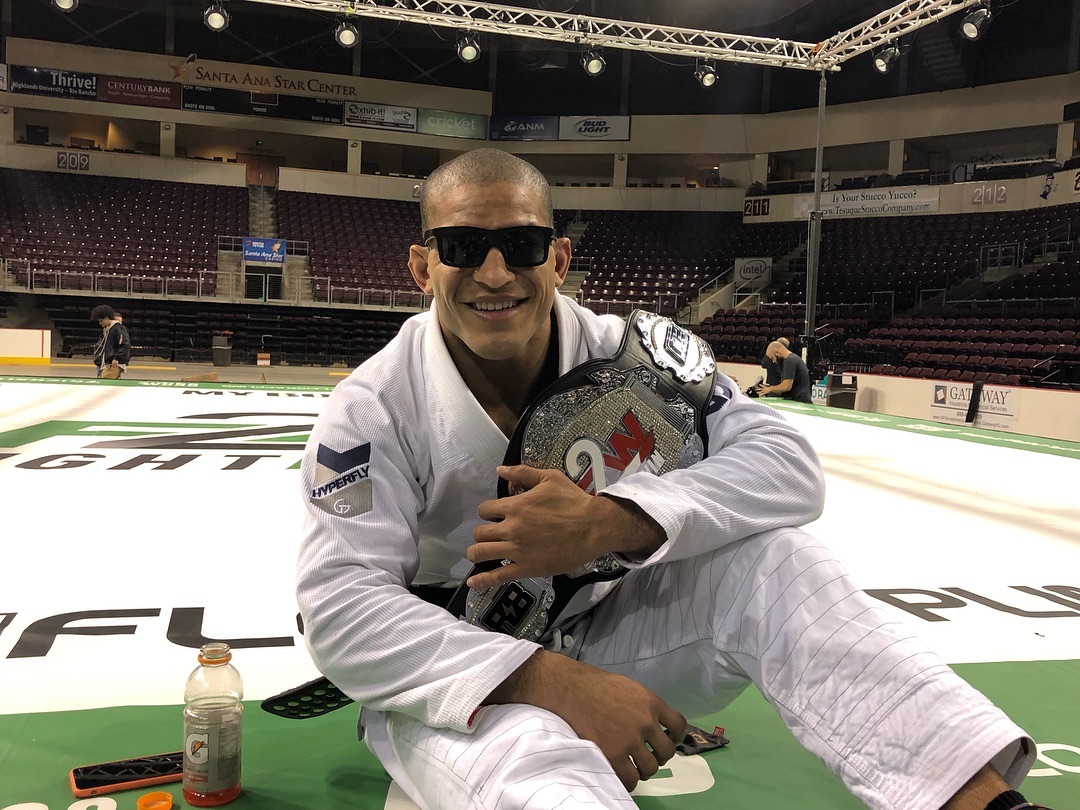 Rio Rancho NM – The wild west spirit is still alive in the southwest. Fight2Win rode through town with its 102nd showing and let’s just say that there was enough gi slinging and tusslin’ to make the cowboys of the past green with envy. Also featured in the evening’s offerings was F2W’s effort to showcase “old school” judo rules competition. Here’s a recap and the evening’s results starting with the main event.

You can say that this was a big match. Not only because there was a belt on the line, but because both of these athletes were coming in with a combined weight around the ballpark of 500lbs! What also added to the anticipation was that this match would be a tie-breaker of sorts, with these two competitors having faced off against each other on two other occasions and splitting the results at 1-1.

The match started off with Aly attempting a quick double leg takedown that was easily stuffed by Gimines and the next five minutes of intense grip fighting that resembled an additional F2W old school judo match. At close to the five and a half minute mark Aly nailed a sweet fireman carry takedown but was immediately countered by Gimines quickly attempting Aly’s back which resulted in a brief ground exchange and then back to their feet. The struggle continued back and forth until about less than three minutes left in the match, Aly was able to snap Gimines down and secure a cross choke from knee on belly position and secure the Super Heavyweight Gi Champion belt.

This was a high energy match that didn’t waste any time with the takedown attempts, as Aldrich fired the first shot with a fireman carry takedown attempt that was easily stuffed by Butler. There was a lot of back and forth action with a notable slam (which are legal under this ruleset) by Butler while Aldrich looked to be attempting a triangle from his back. The end came shortly after referee Daniels stood up the two competitors after newaza sequence. Aldrich was eventually able to pull off a sweet rolling bow and arrow choke, countering off of a failed drop seoi nage attempt by Butler. This match was one of the three matches awarded “Fight of the Night”.

Aurora Colorado grappler, Eric Buck was pitted against hometown Gracie Barra representative Saul Elizondo in a 135lb contest that was aggressive, and at one point saw Buck stand up in Elizondo’s guard so he could slam him in a blunt attempt to get Elizondo to open up his closed guard. And a strong closed guard it was, as Elizondo eventually used it to set up a slick sweep, using a secured underhook and immediately locking on a neck crank and using what was once a closed guard as a closed mount to stretch out Buck and secure the tap.

In a match that had “special” written all over it when Mile-High Gracie representative Troy Everett entered the competition area rocking the solid Mariah Carey 90’s circa pop hit “Dream Lover” to go into battle against Gracie Barra competitor James Gifford.

When the match started Gifford wasted no time going on the attack attempting to jump for a standing guillotine which Everett countered by sitting back into guard to initiate the ground phase of combat. The initial ground sequence saw Gifford immediately pass to side control on Everett for a spell, until Everett was eventually able to recover and recover a closed guard on Gifford. Things heated up a bit when it looked like Everett may end the match by slapping on a darce from the bottom position and rolling Gifford to his side, but a game Gifford was able to defend and even secure full mount with his escape. Things came full circle however when Gifford shot in for a double leg, only to be countered by Everett’s match winning guillotine choke to secure the submission and “Fight of the Night” honors for their efforts.

F2W keeps the party going with its next stop in Houston Texas. And as always, if you can’t be there to see it there live, check out the livestream on FloGrappling.com and be sure to come back here for a summary recap of all the action that took place.

Here are the events full results:

Mind Games: How Memory Works on the Mats