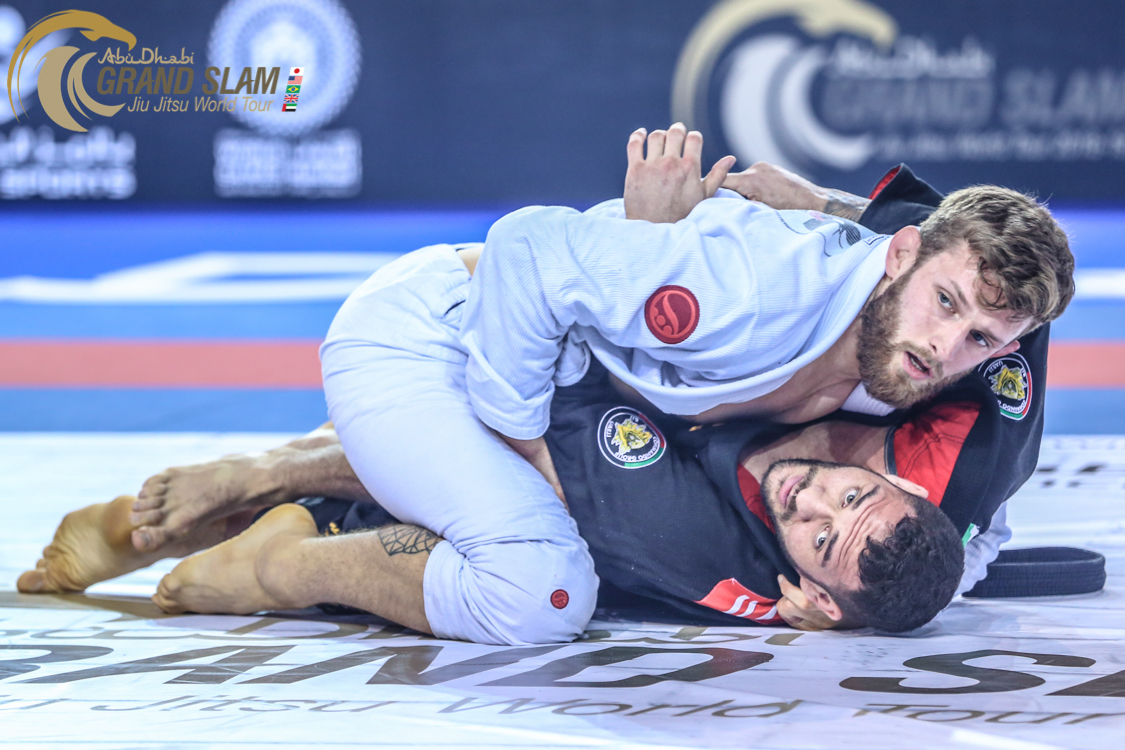 The fourth event in the 2018/2019 season of the Abu Dhabi Grand Slam Jiu-Jitsu World Tour crowned its black belt champions this past Friday, January 11, in Abu Dhabi, capital of the United Arab Emirates. Keeping with the tradition of and always thrilling matches, the Abu Dhabi Grand Slam Tour Abu Dhabi more than delivered to the crowd on the stands or watching all over the world via TV or streaming.

56kg – Back to back titles to Carlos Alberto de Oliveira. Bebeto fought twice to claim his second gold medal of the season. He first choked Frederico Guimarães from the back to reach the final. His opponent would be Massaki Todokoro. The Japanese beat Jorge Nakamura 2-1 on advantages. In the final, Bebeto imposed his game on Todokoro to build a 10-0 lead and take the title.

62kg – Hiago George is also a back to back champion. He fought three times to win the gold medal. His debut was a tough 2-1 win on advantages over Pedro Clementino. In the semifinals, a bow and arrow choke finished Gabriel Frenhan. On the other side of the bracket, João Miyao fought once to beat Russia’s Isa Karasanov 2-0. In the final, after a 8-8 tie on points, Hiago took gold with a narrow 1-0 lead.

69kg – Paulo Miyao is back. He fought three times to claim the gold medal in Abu Dhabi. His debut was against Jordan’s Abdullah Nabas, beat with a 11-2 lead. In the semifinal, Miyao caught Daniel Santana with a choke from the back. On the other side, Tiago Bravo had the perfect strategy to make his way to the final. In two matches, he beat Hilton Silva via referee decision and João Gabriel Sousa by one penalty. In the gold medal match, Miyao picked up the pace to reach the back and sink a bow and arrow choke.

77kg – After winning in Tokyo in the season opener, Diego Ramalho is back on top. In three matches, he first beat Italy’s Alexandre Molinaro 2-0 and then outscored Marcos Paulo Costa 3-2 on advantages in the semifinal. Australia’s Levi Jones-Leary was the surprise factor in the bracket. He first beat Adriano Araujo 6-2 and then took Roberto Satoshi’s back to win 4-0. In the final, Ramalho was able to put the breaks on Levi to win with a 2-1 lead on advantages.

85kg – Lucas Barbosa worked hard in the most crowded division of the day. He debuted with a 2-0 win over Igor Sousa to meet Manuel Ribamar in the semifinal. A narrow 1-0 lead on advantages was enough to put Barbosa in the final. Rudson Mateus had no rest in Abu Dhabi. He debuted against no other than Gabriel Arges, making it through with a 2-1 lead on advantages. In the semifinal, Rudson found an armbar to finish Bradley Hill. The final was a very tactical match that ended with a 0-0 tie. Barbosa took the title home via split referees decision.

94kg – Finally gold for Adam Wardzinski. One of the most active competitors in the ADGS circuit, the Polish black belt seemed to always come up short of the gold medal. Not this time. In three matches, Adam first finished Matheus Godoy from the back, then beat Zayed Al Kaabi via WO in the semifinal. The last challenge would be Renato Cardoso, who made it to the final with a 20-0 win over Oriones Netto and then a 2-0 lead on Helton Junior in the semifinal. The gold medal match was close, but Adam made his game work and built a 2-1 lead on advantages to take the gold medal home.

110kg – Third gold medal for Erberth Santos in the 2018/2019 season. A fan favorite in Abu Dhabi, Erberth first beat Paulo Pinto 2-0 with a takedown. The opponent in the final would be known rival Ricardo Evangelista, who beat Rodrigo Ribeiro by referee decision. In the final, a narrow 1-0 lead on advantages put Erberth on the highest step on the podium.

62kg – Two matches and two submissions for Bianca Basílio to keep the crown in the weight class. She first caught Hope Douglas with a foot lock. Dayane Bazzoni made it to the final with a submission on Sabryne Cruz. In the final, Bianca worked her way to Dayane’s back to sink a bow and arrow choke.

70kg – Three strikes for Thamara. The brown belt debuted in the division with a armbar finish on Poland’s Magdalena Loska. Samantha Cook also made to the final, but with a 7-0 win over Venezuela’s Veronica Macedo. The final was a thrilling match. Behind 2-0 on the scoreboard, Thamara went for a last second back take to turn the score to a 4-2 lead and take the gold medal home.

90kg – With three athletes, both Gabrielli Pessanha and Nathiely de Jesus finished Marcelle Cantanhede to reach the final. The gold medal match was very close and Gabrieli won her fourth title in the season with a 1-0 lead on advantages after a 4-4 tie on points.

The Abu Dhabi Grand Slam Tour Abu Dhabi returns this Saturday, January 12, for the final day of matches. The highlight of day 3 is going to be the middleweight bracket in the Abu Dhabi King of Mats series. Ten of the best competitors in the world will clash for the title.