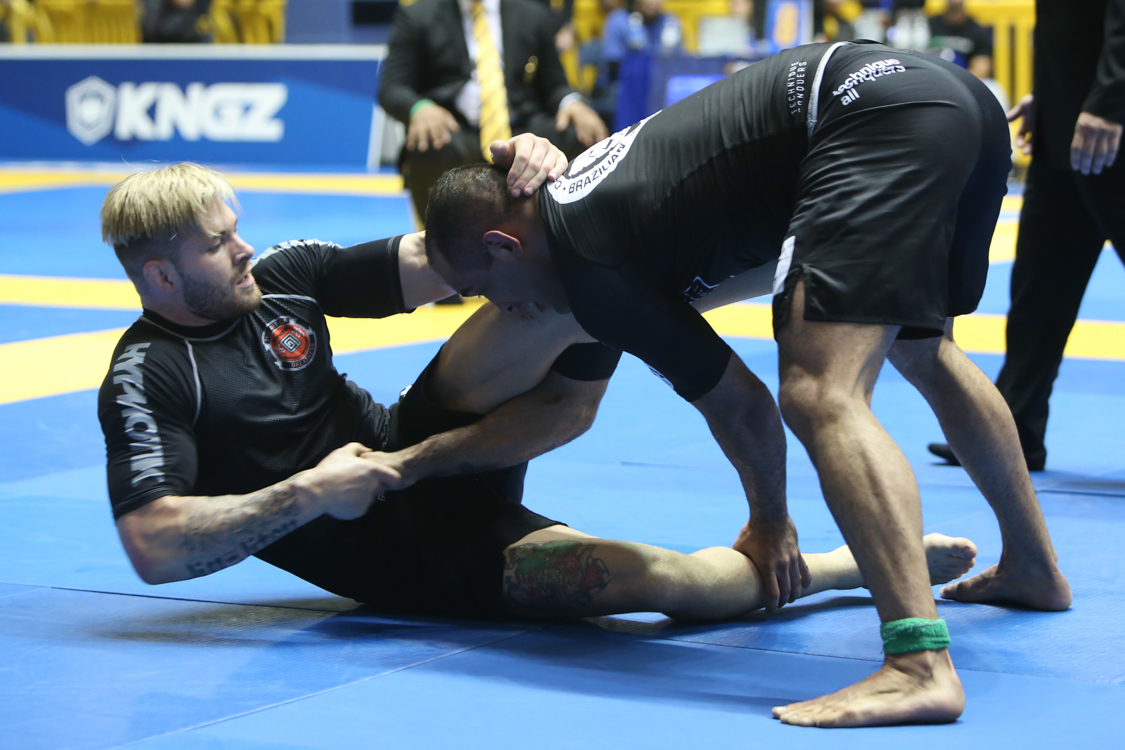 The 2018 Worlds No-Gi is in the books. For three days, the IBJJF event brought the gentle art community together at the Anaheim Convention Center. In the end, Gordon Ryan and Beatriz Mesquita walked out as the biggest standouts of the weekend. The two dominated the black belt divisions and claimed two gold medals each for their collections.

Gordon Ryan could not finish all his opponents, as he public declared he wanted to before the event. Nevertheless, his performance in Anaheim was impressive. In the open class, he got the tap in three out of five matches. He debuted on Saturday with a choke from the back on Khalil Fadlallah, then repeated the dose against Vergard Randenberg. In the quarterfinals, he faced a very tough Patrick Gaudio and had to settle for a 2-1 lead on advantages after a 4-4 tie on points. The semifinal was another war against Jackson Sousa, but Gordon once again found his way to a RNC finish.

Yuri Simões got to the gold medal match by choking Scott Thometz from the back, then outscoring Robert Malof 9-0, beating Aaron Michael and finally getting a narrow 4-2 win over Thiago Sá in the semifinal.

The Gold Medal match on Sunday was a tense one and very strategic. Gordon managed an advantage early for a near sweep. The Renzo Gracie pupil fought the entire match on the bottom, defending Yuri’s pass attempts while trying to find an opening to sweep or take the back. After 10 minutes, the 1-0 lead on advantages was all Gordon could get, but that was enough to secure the gold medal.

In the female division, Beatriz Mesquita was on fire. In the open class, she debuted on Saturday with a choke from the back on Jessica Cristina. Then she caught Anna Nordeno with an armbar in semifinal.

On the other side of the bracket, Jessica Flowers first finished Ffiona Davies with a toehold and then beat Amanda Loewen 7-2 to meet Bia in the final.

On Sunday, Bia and Jessica battled to the very end in search of the gold medal. Bia ended up with a narrow 2-0 lead on advantages thanks to a near guard pass and a near sweep.

In the other weight classes, results were as follows.

Featherweight – Ffiona Davies built a 7-0 lead on Amanda Monteiro to become the champion,

Lightweight – Catherine Perret managed a 2-0 lead on advantages on Tammi Musumeci to claim the gold medal.

Middleweight – In the most anticipated match of the female division, Bia Mesquita worked one takedown to beat Ana Carolina Vieira 2-0 for the title.

Medium-Heavy – In a last second effort, Luanna Alzuguir outscored Claudia do Val 2-1 on advantages following a 4-4 tie on points.

Heavyweight – Nathiely de Jesus had to settle for a narrow 1-0 lead on advantages after a 6-6 tie against Maria Malyjasiak.

Superheavy – Jessica Flowers made quick work of Nivia Moura to find a kimura lock and finish for the gold medal.

Roosterweight – Nobuhiro Sawada tied the match in 6-6 in the final 10 seconds and then beat Cicero Saldanha by referee decision to secure the gold medal.

Featherweight – Kennedy Alencar got a takedown in place very early and was able to control the rest of the match to beat Gilson Nunes 2-0 and become the champion.

Lightweight – Gianni Grippo flicked a switch in the end of the final to speed up the pace of the match, get to Marcio Andre’s back and finish with a rear naked choke.

Medium-Heavy – In a great performance, Josh Hinger worked a guillotine choke to finish Marcos Tinoco and secure the title.

Heavyweight – Tim Spriggs and Jackson Sousa fought the final with maximum intensity. After a 2-2 tie on points, the referees decided in favor of Spriggs, now a black belt world champion.

Superheavy – Kaynan Duarte wasted no time to finish James Puopolo with a guillotine and become a black belt world champion.

Ultra Heavy – Gordon Ryan secured his first gold medal of the weekend when Roberto Cyborg was disqualified for repeated slaps to Gordon’s face and neck and also for stalling.

Get more more info on the Worlds No-Gi on our Instagram Page. Coverage brought to you by War Tribe Gear. Click here for the complete results.