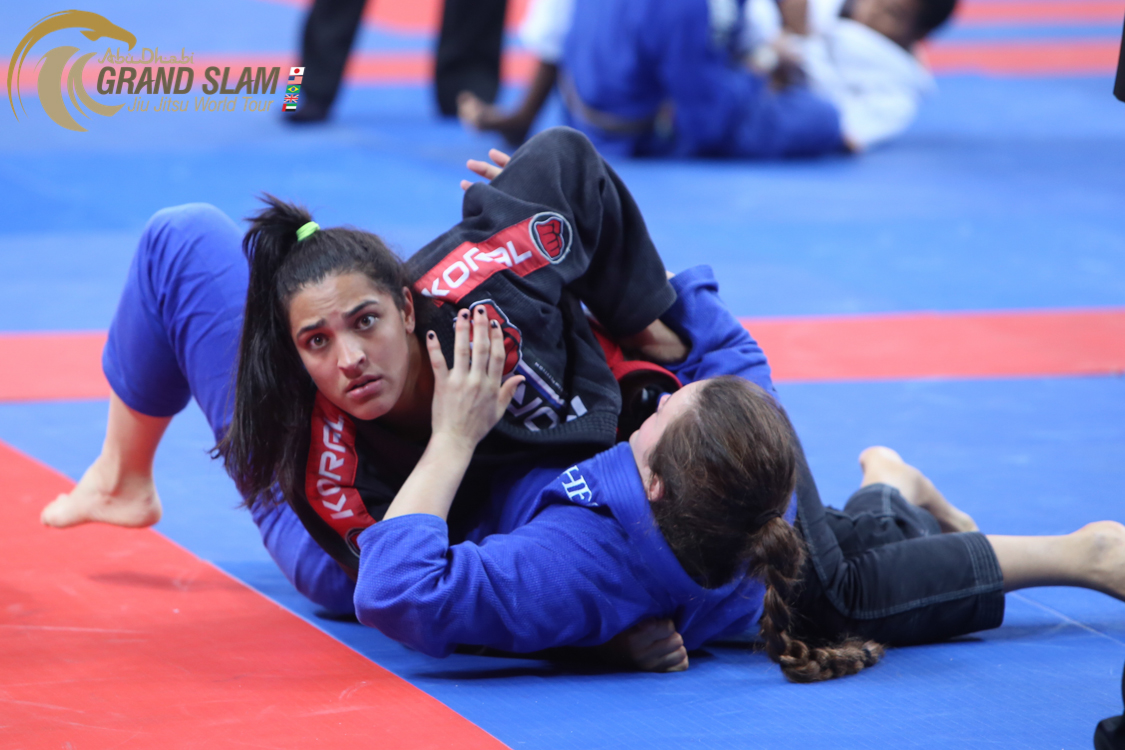 Day 2 of the Abu Dhabi Grand Slam Rio had packed stands at the Arena Carioca 1 and tons of thrills on the mats as the black belt division came to play. Stars from all over the world stepped on the mats to fight for their spots in the gold medal matches. The crowd was on its feet throughout the day as the action was nonstop.

Here are the finalists for each weight class of the adult black belt division, both for men and women.

Felippe Melo debuted in the division beating the reigning champion Jorge Nakamura 2-0 on advantages and then outscored Aldo Ubaldo 4-2 to reach the semifinals. The spot in the final came with a decision win over Frederico Guimarães. The other finalist, Carlos Alberto da Silva debuted with a 12-0 win over David Herrera, followed by a submission win over Robson SSoares. In the semifinal, Carlos beat Levy Ferreira 10-2.

Batista and Hiago will reenact the the final match of the ADGS LA. Batista debuted in the bracket with a win over Jose Tiago, followed by a 2-0 win on advantages over Fernando Soares. In the semifinals, Batista faced Guilherme Carvalho and finished the match with an armbar. Hiago had his first match against Magno Vieira and won 3-0 on points. Then, Hiago went on to face Franklin Silva, finished with an armbar. In the semifinal, Hiago beat Jonas Pereira 8-0 to secure her shot at the gold medal this Sunday.

Paiva had a long way to go until he secured his spot in the gold medal match. He first finished Richar Nogueira with a choke from the back. Then he repeated the outcome against Alessandro Costa. A 2-0 lead over Mateus Garcia granted Isaque a spot in the semifinals. He made it to the finals with a 6-4 win over Lucas Gomes. On the other side of the bracket, João Mendes debuted with a 1-0 win on advantages over Gabriel Villela. Then he beat Jean Adamy via WO and outscored Victor Moraes in the quarterfinals 2-0 on advantages. The semifinal was against Rafael Mansur, defeated by referee decision after a 2-2 tie.

No easy path for the finalists in the most crowded division. Hugo Marques debuted with a finish on Caio Cipriano. He then faced Luan Rodrigues, defeated with a 5-0 lead. The opponent in the quarterfinals was the always tough Jaime Canuto and Hugo managed a referee decision win after a 0-0 tie. Finally, in the semifinal, Marques beat Leandro Souza 3-2 on points. Yan Paiva also had a tough path to the final. He first beat Alexandre Cavalieri 2-0 and then beat Vitor Corte by referee decision. In the quarterfinals, Paiva beat Marlus de Souza 3-0 on advantages. The semifinal was against Bruno Tosto, beat with a 2-0 lead.

After his title at the 2018 ADWPJJC, Bahiense wants to jump back in the season. He made it to the final with four matches on Saturday. He first finished Raimundo Italo with an armbar to face Juan Siva, who also had to tap. In the quarterfinals, Bahiense beat William Martins 5-2. The semifinal was against Matheus Souza and a 2-0 lead was enough. Diego Ramalho wants his second gold of the ADGS season and he worked hard to reach the final. He first beat Bradley Hill 4-2, then he caught Edjonson Andrade with a foot lock. In the semifinal, a toehold was the weapon of choice for Diego to beat Henrique Moreira.

Helton Jr had three matches on his way to the final. He first finished Allef Silva and then beat Caue Rodrigues 2-0. In the semifinal, Junior beat Anton Minenko by referees decision following a 0-0 tie. Kaynan Duarte also had three appearances on the mat. He first beat Mario Netto 4-0 on advantages and met with Rudson Mateus in the quarterfinals. A 1-0 lead on advantages was enough to put Kaynan in the semifinals against Adam Wardzinski. The spot in the final came with a 2-0 lead for a sweep.

The 2018 ADGS LA champion wants to keep his status. Erberth Santos first finished Gilmar Oliveira with a rear naked choke. He then beat Guilherme Cordiviola 2-0 and reached the semifinals against Igor Schneider. A 3-2 lead on advantages put Erberth in the final. Fernando Reis first beat Max Gimenes by decision, then finished Marcelo Castro and outscored Raphael Souza 3-0. In the semifinal, Reis was able to beat Ricardo Evangelista by referees decision.

Mayssa wants her third title in three ADGS events in the season. She fought twice on Saturday and finished both her opponents on her way to the final. She first choked Vanessa Santos from the mount and then choked Mariana Rolszt from the back in the semifinal. Rita Reis fought once to reach the final. She choked Julia Pareja from the mount.

Talita debuted against no other than Amal Anjahid. In a vey tough match, Talita beat Amal 2-0 with a sweep. She then finished Edivania Silva with a leg lock. Amanda Nogueira wants to be on top again. She also fought twice to reach the final, finishing Thaisy Buchebuam and then beating Ana Rodrigues 2-0 in the semifinals.

Bia Basilio fought twice to reach the final. She finished Renata Melo and then also finished Ruthe Caen with a triangle. Michele Oliveira beat Pamela Boveda 5-0 and then Juliana Costa 2-0 on advantages.

On her quest for the third title in three ADGS event in the season, Gabrieli Pessanha fought twice on Saturday to secure a spot in the final. She beat Carina Santi 4-2 and then finished Mayara Oishi with a choke from the back in the semifinal. Francisca Floras also fought twice and beat Karla Albuquerque 1-0 on advantages to meet Thais Santos in the semifinal and also win with a 1-0 lead on advantages.

The Abu Dhabi Grand Slam Rio returns this Sunday, November 18, for the final day of matches. The action kicks off at 10:00AM local time and the black belt finals kick off at 3:00PM.  Click here for more info. You can watch it live on Flo Grappling. Follow the complete coverage on Instagram, @ADWJJT.

Abu Dhabi Grand Slam Rio: champions finish their way to the top of the podium in exciting day of finals in Rio