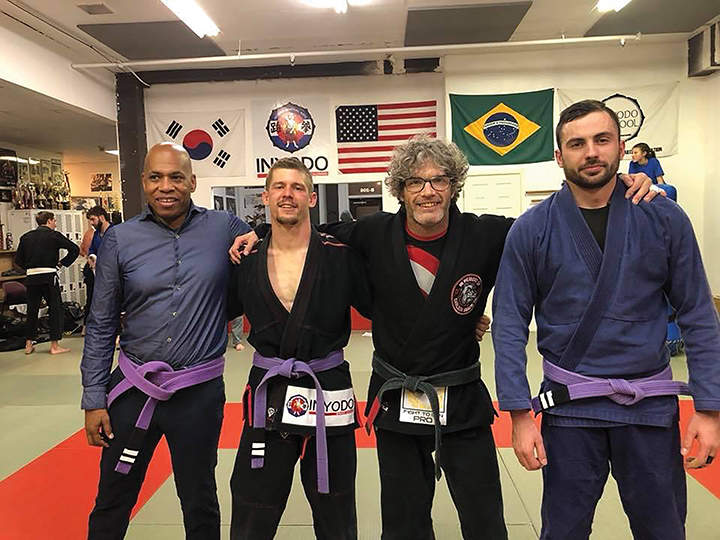 On May 2nd, 2018, Dwane did like he did every Wednesday. The two stripe purple belt went into his school (Inyodo martial arts) to take class and roll afterward. At the end of class, after a normal day of training and drills, Dwane felt a little more tired than normal. He didn’t think much of it, but then his training partners noticed that he was looking at them a little oddly and was slurring his speech. Dwane was 53 years old and had been training jiu-jitsu for a while. He and his doctors considered him in excellent shape for his age. Well, that evening, despite the warnings of his teammates, he insisted he was fine and was intent on heading home. His good teammates put up a fight and made sure that he stayed. A quick call to 911 and the paramedics on scene rushed him to Vail Hospital in Colorado. Once 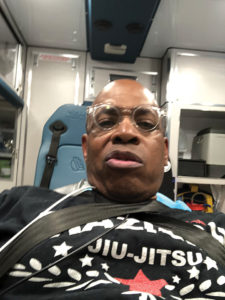 there, it was determined that Dwane was experiencing a severe stroke, in fact, it was an Ischemic stroke, a total blockage. He was airlifted to a stroke center in Denver where emergency brain surgery was performed. Incredibly, two days later Dwane walked out on under his own power with only a numb index finger. His doctors pointed to his overall general good health thanks to jiu-jitsu as a big part of his speedy recovery. Dwane insists that jiu-jitsu literally saved his life. Had he not been at class that day, he might have been in bed sleeping when the stroke occurred. Thankfully, his teammates came through by insisting he seek help. Dwane is extremely lucky as stroke is the leading cause of serious, long-term disability in the United States. Each year, approximately 795,000 people suffer a stroke, and about 600,000 of these are first attacks. Strokes can occur at any age; nearly one-fourth of strokes occur in people under the age of 65. Stroke death rates are higher for African-Americans than for whites, even at younger ages.

Thankfully, Dwane’s story has a happy ending, but it serves as a great warning for all of us to pay attention to this common danger. Here are some tips on spotting a stroke as soon as possible.

Sudden numbness of the face, arm, or leg, especially on one side of the body. 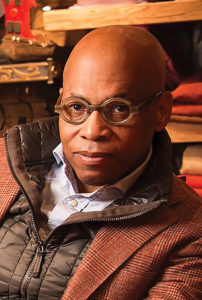 Sudden trouble seeing in one or both eyes

Sudden severe headache with no known cause

The signs of a stroke depend on many factors. Each person may have different stroke warnings- it may be associated with a headache or may be completely painless. If you or someone you know is having these signs, call 911 immediately and seek medical help. DO NOT try and diagnose the problem by yourself, and DO NOT wait to see if the symptoms go away on their own. Even if the symptoms pass quickly, they could be an important warning that requires prompt medical attention. For more information go to strokecenter.org.

Getting A Grip On Heat.