The Advantage of Advantages (And Their Disadvantages)

We’ve all been there…the last 30 seconds of a finals match between two super evenly matched competitors; one opens up to go for the kill the other goes to pass the guard… ADVANTAGE! The patient (and less aggressive) competitor wins the match, not by points or submission, but by an arbitrary “advantage.” Most competitive grapplers and jiujiteiros have been on both sides of this conundrum and neither side is a pleasant place to be.

Advantage? What the heck is an advantage?

In jiu-jitsu competition, there are a variety of ways to win a match. One competitor can submit the other or score more points than the other. There are various ways to get disqualified, which is never anyone’s preferred way to win (or lose), but it happens. There is also a construct put in place by various competition circuits called the “advantage.”

Simply put, an “Advantage” is an “almost,” as in “one competitor almost passed the other’s guard, almost swept the other or almost submitted the other.” For all intents and purposes, advantages are subjective and put in place to prevent overtimes. They are, fundamentally, a momentary referee’s decision. I say, “momentary” because, regardless of which competitor pushes the pace, advantages wind up being more important.

At the end of the match, in the absence of points or a submission, advantages reign supreme. World championships have been won and lost on an advantage, and for this reason, their existence has often come under fire.

Why would a tournament buy into this construct?

Competition-based jiu-jitsu is almost always subject to a time limit. Even high-level sub-only invitationals have some sort of time limit because otherwise spectators would invariably lose interest. For this reason, when two evenly matched competitors go against each other, a match will often go to a draw if relying entirely on points and a submission. Enter the “Advantage,” set up to define a winner, even if no points or an equal number of points have been scored.

Advantages are difficult as they can be paired with point scoring tools. For example, when a competitor hits a sweep, the other person has a designated amount of time to recover. If they can recover within that allotted period of time, an advantage is awarded to the person who attempted the sweep. The IBJJF rule book states in Article 5 Section 5.5, “The referee may only award an advantage point once there is no longer a chance of the athlete reaching a point-scoring position.” That determination can be difficult to make because a lot can happen during that time, making advantages sometimes exist in a gray area between real position/situations during a match. 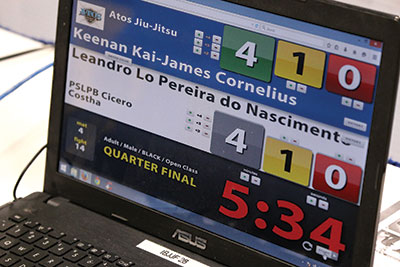 Somehow it always seems to happen, two of the best competitors in the world can end up with a tied score with five minutes to go or even at the buzzer.

Different organizations have different rule sets. Some do not score advantages, while others give them for situations and positions that may seem counter-intuitive. For example, one organization gives advantages for the guard pull, while another may not give advantages for certain submission attempts. It depends on the organization as well as the individual referee. I did a local tournament recently that had issues with the scoring table sometimes missing advantages entirely. For this reason, it is best to try to win all matches by submission rather than leaving the match in the hands of the tournament/referee/scorekeepers.

Even if you are a submission hunter, you may come across an opponent who is difficult to submit and forces you to rely on points and advantages for victory. In some cases, such an opponent can be an inferior jiu-jitsu practitioner, but still win the match based on a minor mistake made by the better practitioner. For example: in IBJJF, if one person is playing guard the whole match and the other person is defending, there can be some issues for the guard player. When the guard player attempts a triangle, they have to break the other person’s posture to gain an advantage. However, if the person defending manages to force the other person to turtle, they wind up getting an advantage. This can ultimately cost the better practitioner the match.

Sometimes just going for that sweep against an opponent content to hold a position is enough to earn the advantage.

Anatomy 101 for the Jiu Jitsu Athlete