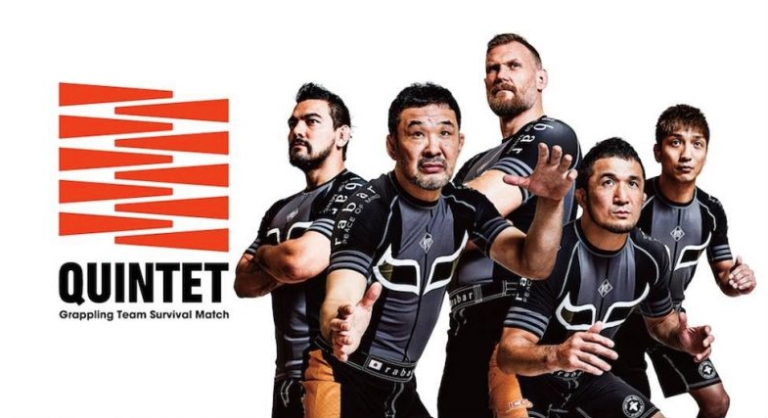 Go to any jiu-jitsu tournament and you will most definitely witness competitors from multiple academies competing against each other and their teammates rooting them on from the sidelines. Some of the larger teams may even break into a chant/counter chant that represents their academy in competition.  In the larger tournaments such as IBJJF and Abu Dhabi World Pro, there are points that go towards academies/teams for an overall team award to the academy/team that earned the most points through a team point system. But in the new age of premiere grappling events showcasing an elite card of match-ups with the top names in grappling, none of them had any kind of team emphasis… Until now. Insert “Quintet”.

Quintet is a new league set to make its debut on UFC FightPass April 11th from the Ryogoku Kokugikan Sumo Hall in Japan.

Quintet is a team grappling event featuring its own brand of submission-only rules. The event will be a “winner stays in, ‘survival'” format (think along the lines of the last NFL survival pool you participated in. Yeah, like that). Each team will consist of five competitors with a total weight not exceeding 430 kilograms (948 pounds) and all competitors will compete in rash guards. Each match is scheduled for ten minutes. If neither team is victorious after all five matches, then both teams get to select one competitor for an additional match to determine the winner.

Kazushi Sakuraba has partnered up with fellow catch-wrestler “The War Master” Josh Barnett to head the promotion and will also be one of many prominent names competing and representing the Haleo Dream Team which will also include other grappling standouts such as Marcos Souza, Daisuke Nakamura and Hideo Tokoro. Representing the Polaris Grappling organization’s team will be Dan Strauss, Craig Jones, Gregor Gracie, Charles Negromonte (and a fifth member TBD). There will also be two additional teams representing Sambo and Judo featuring some of the top competitors in those disciplines such as Satoshi Ishii and Marius Zaromskis (Dream Welterweight Champion).

With UFC FightPass backing this event and future plans to have additional events by the end of this year, it goes without saying that we are very excited to see what this format has in store in this new era of coverage. So be sure to tune in and let us know what you think on our facebook page.

The Joys of Nut Butters