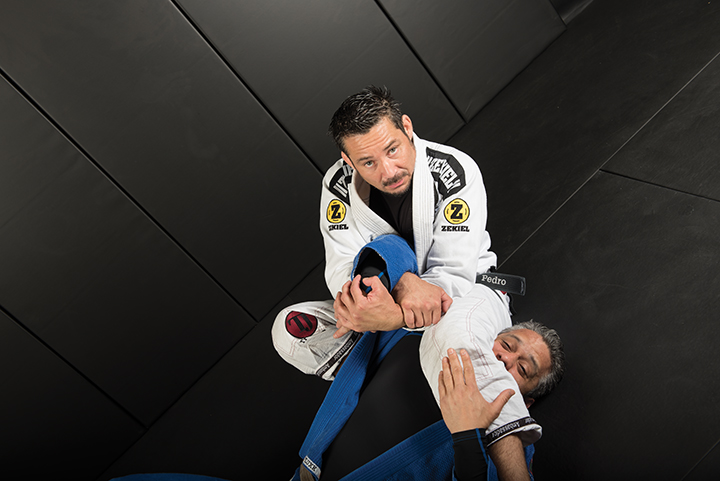 MATT BAKER IS A LONG TIME FRIEND OF THE MAGAZINE. HE’S A SECOND-DEGREE BLACK BELT UNDER JEAN JACQUE MACHADO.
Over the years, he’s been developing what he calls Trujitsu. According to Matt, it is a foundation of basic rules and concepts that anyone can use, but they’re typically best suited for those of us that aren’t the most athletic or most agile grapplers on the mat. The rules and concepts that he employs in Trujitsu have
been observed and documented after competing and referring thousands of matches over his career, both as a competitor and as a referee. Currently, Matt is ranked number one in the world at Black Belt Males Masters 3.
Matt likes to relate to jiu-jitsu as being a language. Think of a salesperson that maybe isn’t the sharpest with their words. If they talk too quickly or want to jump ahead in the process to
catch opportunities, they probably won’t be the most successful salesperson. Instead, think of that smooth, likeable character that after a few minutes of talking you’re begging them to sell you something. Matt says that the rules employed in Trujitsu will help your jiu-jitsu become more fluent. Some of the concepts
of Trujitsu include framing, which is using the proper frame to combat pressure or being efficient with every movement. If a movement doesn’t help you towards your goal, don’t do it. Proper hip placement and connection to your opponent makes all the difference most of the time. On their own, none of these concepts are groundbreaking, but when used and orchestrated together, they can have a huge impact on your jiu-jitsu. Matt’s
not selling courses or memberships, but he is sharing quite a bit of great information on the Trujitsu website. Be sure to check it out at thetrujitsurevolution.com. But until you do that, here is a sampling of the techniques that Matt considers to be great examples of the Trujitsu system. Enjoy