“Gold medals aren’t really made of gold. They’re made of sweat, determination and a hard-to-find alloy called guts.” Dan Gable

We sweat when we train, a lot. With the possible exception of Crossfit, I have never seen so many people in a single room generate so much perspiration. We all have partners who leave puddles on the mat that are large enough to support goldfish. Did you know that during a 90-minute training session you could sweat out up to 10 pounds? Sweat dripping in your face is such a common occurrence, it even made Seymour Yang’s Grossest Things In BJJ pictogram as the nastiest thing about BJJ. It’s everywhere and we all thinks it’s disgusting, but what do you know about sweat? Is all sweat the same? Can exposure to your partner’s sweat make you ill? What makes you sweat more or less? These questions and many more will be answered as we delve into the mysteries of perspiration.

Your sympathetic nervous system controls your body’s production of sweat. If you feel that you sweat a lot when you perhaps shouldn’t be, there are now cosmetic treatments available for underarm sweating. The sympathetic nervous system is also responsible for your fight or flight response to certain types of stress. There are 2 to 3 million sweat glands in your body. The majority of them are eccrine glands, followed by apocrine and finally sebaceous. The sweat from each of these glands has different properties, composition and even taste. For what it’s worth, regardless of where sweat originates, it’s a sterile fluid when excreted.

When you think stinky, nasty sweat you’re thinking of what comes out of the apocrine glands. Apocrine glands are controlled by the adrenal medulla. They’re also responsible for the galvanic response in your skin, which is used by lie detectors. These glands typically end in a hair follicle, not a pore, and are found in the arm-pits and nether regions. Apocrine sweat contains proteins and carbohydrates that give it a yellowish milky color, which is why it stains. Bacteria that lives on your skin consumes those nutrients and, in turn, creates byproducts which cause the odor associated with it. 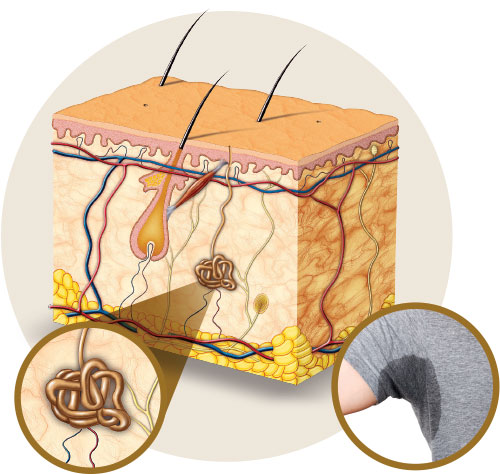 Why Do We Sweat?

There are two main reasons why we sweat. You’re likely familiar with the first, which is thermoregulation. Thermoregulation is how we are able to maintain a steady body temperature of 98.6? despite living in an environment that is not that temperature. This process is also how we’re able to keep from overheating from the heat that our body generates. Your body is always producing heat and as a result, you are always sweating. For example, if you’re experiencing a period of low sweat production in cooler temperatures or when resting, your body takes back much of what is excreted. Water, sodium, potassium and chloride are all reabsorbed and very little sweat actually gets to your skin. As your activity level and/or the temperature of your environment increases, your body’s production of sweat will outpace its ability to reabsorb the water and electrolytes from the sweat, which is why sweat is often salty. This is also the reason why replenishing your electrolytes after training can be very important. 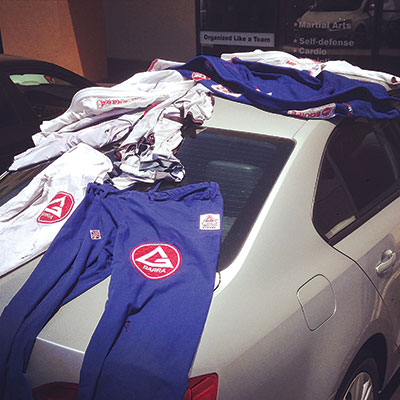 Heat of evaporation is the amount of heat that is absorbed by your sweat when it evaporates and cools you off. In a perfect world and with 100% efficiency, a liter of sweat can remove 540 kcal of heat. For perspective, that is enough heat in order to heat 2 pounds of ice into steam. The major factor in determining evaporation efficiency is the humidity of the air around us. When the humidity is less you’re able to evaporate more efficiently and stay cool easier. Ever hear someone from the Southwest say, “It’s a dry heat and that’s not as bad”? Now you know why. The amount of sweat that you produce varies significantly between individuals and is affected by your environment. People living in a hot climate can produce as much as 3x the sweat as someone living in a more temperate climate.

Sweat’s second role is less obvious, but still of importance. It has also been linked to axillary steroids, aka human pheromones. While humans are primarily visual creatures, these pheromones appear to play a real, albeit subtle, role in sociosexual behaviors. There are 3 main pheromones: androstenol (female), androstenone (male) and androstadienone (both genders). These pheromones have all been linked to attraction in both men and women.

Matthew Corley is a Registered Pharmasist and Clinical Phramacy Manager who trains under Ezra Lenon. The best way to keep up with his articles and reviews is at facebook.com/MappingMyBjjJourney
One Comment