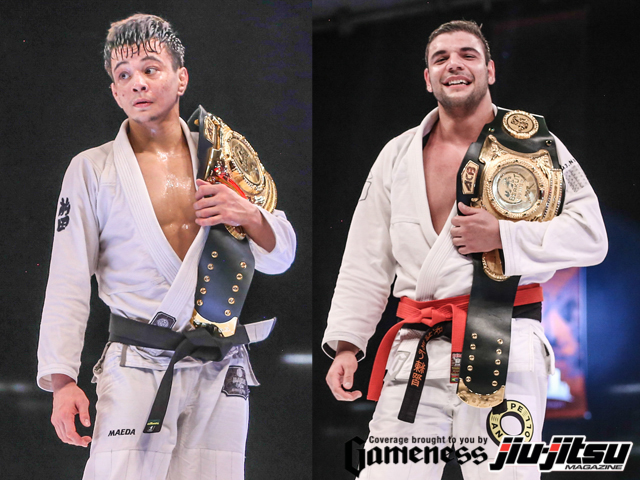 São Paulo is used to big events. This Friday, January 26, Brazil’s economic capital witnessed another one at the Clube Hebraica. Thirty four of the most accomplished grapplers in the world gathered to compete in 17 super matches including two title matches. The featherweight division and the heavyweight division were up for grabs. Here’s how each match played out.

The reigning light-featherweifght black belt world champion payed no attention to the rule that penalized the athlete who pulled guard within the first minute of each round. Musumeci went straight to his guard gama and wasted no time to reach a position where he was able to finish with a foot lock in under two minutes.

The Ares Jiu-Jitsu representative controlled actions on round 1, but fell just short of finishing the match. Moizinho came back to round 2 with one thing in mind and that was to finish Nicholas. He  did it with an omoplata lock that left Welker no other option than tapping.

The first match to go all the way was also a very close one. Hinger started out better, but Thiago was able to balance the match and eventually win by points after three rounds of action.

The third submission of the evening came by the talents of Igor Silva. Much more active in the competition circuit than his opponent Rodrigo Cavaca, Igor used a fast pace to reach Cavaca’s back and in under four minutes get the tap with a choke.

In another generational battle, Carvalho relied a lot on his physical game to outperform a very game Mafra in three rounds. The match had the crowd on its feet during the entire 15 minutes.

Since the first second of the match, Lucas had the full support of the Paulista crowd. Nevertheless, Evangelista had total control of the first round. Lucas worked hard to come back on rounds 2 and 3. With that, he was able to win by points for the jubilee of the crowd.

In another match that went all the way, Lucas Rocha was able to make his game work against the always tough Rodrigo Caporal.

Braulio was part of the broadcast team up until the 4th match, when he was replaced by Josh Hinger. The veteran took on the challenge against the talented Rudson Matheus, recently promoted to the black belt. Matheus stepped on the gas on round 2 and almost took Estima’s back. In the end, Rudson took the win home by points.

Early in the match, Yuri Simões hurt his neck in a bad takedown and his left arm went numb. Nevertheless, the Brazilian powered through and was able to defeat the very tough Bilarov in three fierce rounds.

Barral was ecstatic to compete in Brazil again. Under the watch of his family, including hios father, Barral put his sweep game to work and once on top got to side contro, mount and choked to get the win.

Some of the best takedowns of the evening took place in the 15 minutes that Calasans and Gaudio were on the mat. Patrick was able to come out on top after three rounds of a thrilling match.

Lepri is awesome. He worked his game with perfection to control a very dangerous Marcio André and reach side control and a finish by choke in the second round.

Familiar rivals, Lo and Otavio met once again. Lo played by the same script on rounds 1 and 2, with takedowns and a strong top game while Otavio did his best to counter with his well known guard game. In the end, Lo was able to control the match and won all three rounds.

It was a powerful match! Aly and Buchecha went for it since second one of the first round. Little by little, Buchecha imposed his game to win all three rounds falling just short of getting the submission.

He is back. After staying away for the past two years due to a doping violation, Paulo Miyao returned to the competition scene with guns blazing. In five rounds, he never lost control of the match against no other than Tanquinho. Miyao won rounds 1 to 4 with the same game plan of pulling guard and sweeping Tanquinho to work on his passing game. It worked fine and Miyao is still the featherweight champion.

Rocha knew how dangerous Panza’s foot lock game is. That’s why he took extra care on avoiding that his opponent got too close to his feet. On the occasions Panza managed to get a lock in place, Rocha had his defense game in place to avoid a tap. Near the end of the match, Rocha’s size and weight started to play a role. On round 3, Rocha worked a guard pass to secure the win and take Panza’s heavyweight belt away.

Cocerage brought to you by Gameness.

Hip Pain: “Should I Be Concerned?”