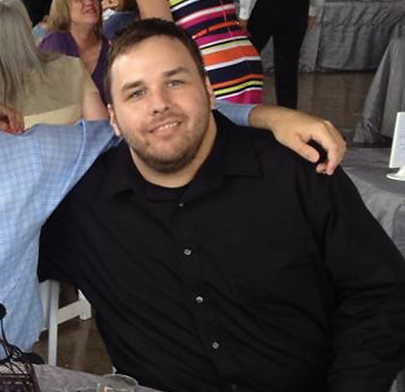 Drug addiction is a serious issue that plagues many members of our society. Today, it takes a backseat to other problems, but drug addiction still remains a concern. Brian Burnham of Baytown, Texas, was once one of these addicts. His five year addiction to opiates had him stealing to support a habit that had him injecting heroin multiple times a day. The law finally caught up to Brian and he was arrested in 2012. As a result of his addiction, the first four days in confinement were spent detoxing (the arduous process of your system adjusting following the removal of an addictive substance).

It was December 8th, 2012. Brian had been moved out of medical where he had been detoxifying for several days and into a general holding area. The television was on that night. Brian watched the legendary BJ Penn take a tough beating from the young Rory MacDonald. Penn, a testament to his character and fighting nature, never gave up or backed down. Brian would also get to see Stockton’s Nick Diaz take on Ben Henderson (the champion at the time) in the main event. Brian became hooked to something 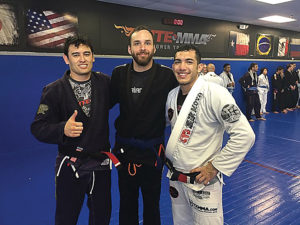 outside of heroin that night, and it was MMA.

After his release, Brian would watch martial arts constantly and managed to stay clean for two years. He needed something more to focus his attention on. He stumbled upon the Joe Rogan Experience Podcast and loved the Eddie Bravo episodes. During these episodes, jiu-jitsu is a large topic of conversation. With a little encouragement from a friend, he started jiu-jitsu at Elite MMA in December of 2014. He was 275 lbs. at the time and couldn’t do a push up. Now, 185lbs and training 5-6 times a week, Brian is a blue belt, and holds an IBJJF Gold medal. He is currently in the best mental and physical health of his life. His school is his family and they say that jiu-jitsu is the

greatest thing that ever happened to him.

How did you discover jiu-jitsu?

I watched my first UFC event in jail while getting clean off drugs and became obsessed with MMA. Later, I discovered the Joe Rogan Experience and after catching a few Eddie Bravo episodes of the podcast, I became interested in jiu-jitsu. After two years of learning about MMA and jiu-jitsu, a lifelong friend convinced me to come in and finally try a class.

What motivates you to train?

I absolutely love it. I have an addictive personality and I finally have found something positive to pour my abundant passion and energy into. I love the constant drive to improve as a martial artist every day. The desire to win competitions is another motivation. Also, the ability to help newer students and pass on my knowledge is hugely rewarding for me.

What else do you do for physical fitness?

I don’t do anything outside of jiu-jitsu for physical fitness.

How have you changed your diet?

My diet has not changed a lot. I still eat a fairly bad diet (Garry Tonon style) but thebiggest change is that I have cut out soda almost entirely.

What’s been the biggest challenge so far?

The biggest challenge so far was just the first few months of class. I was not able to do a push-up or judo roll when I started and it took months just to get my coordination and stamina to a level where I was able to really start learning the techniques properly and making gains in my jiu-jitsu. 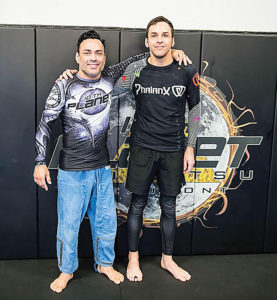 What’s been the best benefit from the changes you’ve made?

The biggest benefit jiu-jitsu has given me is my overall health, both physical and psychological. My confidence has gone through the roof because of jiu-jitsu and not just confidence in self-defense but confidence in everyday social interactions. I am in the best shape of my life, and jiu-jitsu has helped give me something to focus my mind and body on and has helped me stay clean off drugs. I also gained an entire family at my jiu-jitsu school that I love wholeheartedly.

What advice would you give to someone else looking to make the same sort of change?

Just do it. You don’t need to be in shape to start. Anyone can do it. Just go and find a local jiu-jitsu gym and watch a class. Ask questions. Watch YouTube videos. Then make that leap to try a class. The rest will take care of itself.

2017 Worlds Masters: with the brackets out, here’s what to look for this weekend in Vegas