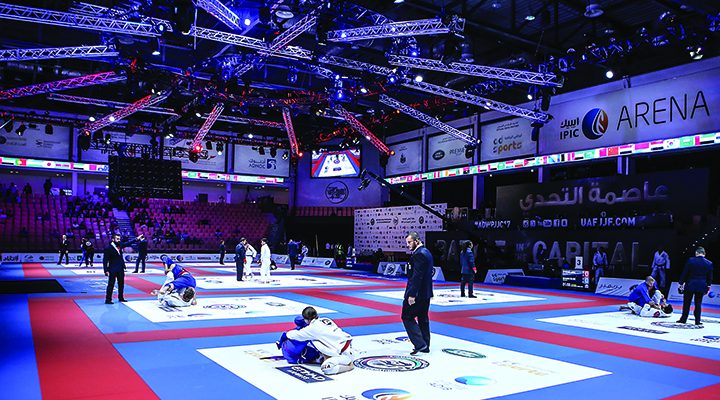 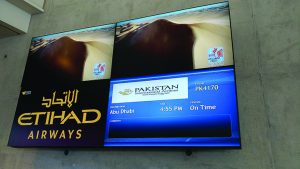 Sometimes I think my boss is Santa Claus. After a brief discussion of upcoming events and other incessant jiu-jitsu talk (which is a normal day at the office, really) it was like Christmas when I received, from said boss, an email with the simple message, “It came. Want to go?” It was an invitation to Abu Dhabi to help cover the action live. It was like I couldn’t respond fast enough to the opportunity. So, fast forward about three weeks with renewed passport in hand; I boarded my Etihad flight for a glorious 16 plus hour flight to the land of sand dunes, black gold, modern skyscrapers, and elite jiu-jitsu!

Elite jiu-jitsu is currently experiencing a global renaissance of sorts. With competitive academies being established on every major continent, it is continually growing, and it looks like the United Arab Emirates Jiu-Jitsu Federation (UAEJJF) is making it a point to give this growth the stage that is feels it deserves in their headquartered city of Abu Dhabi.

Abu Dhabi is making a strong claim of becoming the jiu-jitsu capital of the world. And if the 7,000 plus number of competitors and the expansion of the Abu Dhabi World Pro event by another week isn’t a positive sign for commitment and growth, then I’m not sure what is. 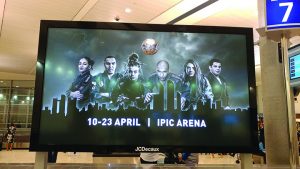 Stepping off of my long flight, I was immediately blown away to see that throughout the terminals of their main international airport, promotions of the Abu Dhabi World Professional Championships (ADWPC) 2017 were playing on all of the big screens throughout the airport as if it was the latest can’t-miss event of the summer blockbuster movie season.

However, the amazement did not stop there. After grabbing my luggage, I was then greeted by the driver responsible for shuttling me to my hotel. As he was getting me safely to my hotel room, I noticed along the way that there were banners that lined the highway with pictures of the different competitors featured in this year’s event. There were also 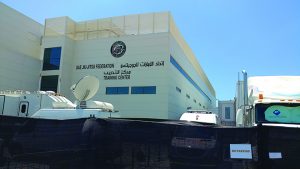 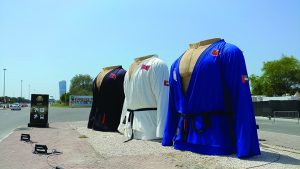 jiu-jitsu monuments consisting of three torsos sporting blue, white, and black gis (they were all black belts) directly outside of the IPIC Arena where all of the festivities were taking place.

Not only is the IPIC Arena the venue where all of the action takes place, it’s featured on the north side of the arena in a state of the art training facility dedicated to jiu-jitsu.

As I went from my hotel to the venue, it was very clear that this was a jiu-jitsu event like no other. With a variety of food trucks and picnic areas lining the parking and entrance areas to the arena, I was greeted with an airport style security procedure (minus the need to remove my shoes, thank goodness). Once that bit of business was taken care of, I was pleasantly surprised by the performers in the massive lobby area that were in national dress, dancing in formation in front of a hookah lounge within the lobby( yes, a hookah lounge) and greeting all who entered. There was a variety of unique, high-level sponsors such as Range Rover and Etihad Airlines, a jiu-jitsu shop, health and wellness representatives, and plenty of excited fans on hand that suggested a promise of an exciting week of events. 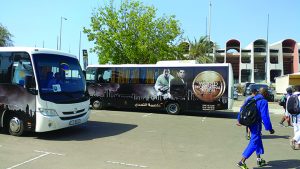 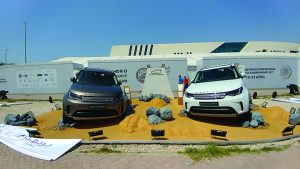 Once inside the arena, I met up with Alessandra who is one of the organizers involved with the UAEJJF. She kindly guided me to the media lounge where I would pick up my press credentials. The lounge was located on the top level of the arena and offered a bird’s eye view of all the action at hand. National media was present to broadcast the matches, effectively putting the sport of jiu-jitsu directly into the living rooms of all of the citizens of the United Arab Emirates (UAE). Imagine that for a moment. A culture that reveres jiu-jitsu so much, they make household names of jiu-jitsu athletes. Could the seed of Olympics dreams for jiu-jitsu be sprouting in Abu Dhabi? Seems that this could be the best guess of any.

This year marked the ADWP’s ninth year of showcasing the top jiu-jitsu talent from around the globe. The UAEJJF brought in many changes for 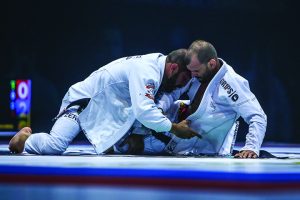 this year’s event. One of the most significant changes was adding an additional week to the front end of the festivities, making the entire event a two-week affair. The initial week would include multiple kids brackets with the youngest competitors eligible to compete at a spry four years of age. The first week also introduced the Para Jiu-Jitsu Championships. This is a major step in showcasing athletes with a range of disabilities, including impaired muscle power, impaired passive range of movement, limb deficiency, leg length difference, vision impairment, and intellectual disabilities to name a few. This was a brave and unique event that truly inspired and displayed on an international stage that virtually anyone can have access to competitive jiu-jitsu.

During the second week, there was the usual tournament format that featured many familiar and new faces alike. In addition, the always crowd pleasing Legends showcase featured some of the biggest and most well accomplished competitors, squaring up in non-tournament superfight matchups to win prize money and a beautiful championship belt. However, an argument can be made that one of the most anticipated additions to the event was the country vs country format. In its introduction, the UAEJJF featured competitors 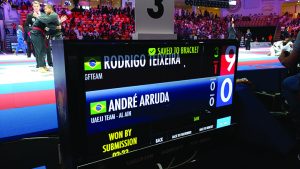 The days of competition were smooth and pretty clockwork with athletes, organizers, and fans tracking the matches and mats via the multiple monitors posted throughout the venue. Resting high above the competition surface were huge, big screen monitors that treated the crowd to crystal clear close-ups of all the action. Mat five was the featured mat that broadcasted to national television.

As hard as it was to believe, on the final day of competition, it seemed that the UAEJJF stepped it up yet another notch in production value. Gone were all of the tournament mats from the day before. Now all that was left was one big, elevated, matted stage, and it was set for the final events for the ADWPC 2017 and the athletes were the rock-stars. No 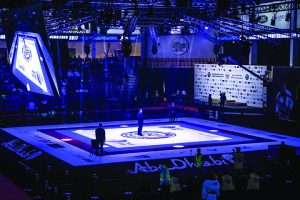 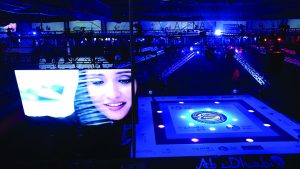 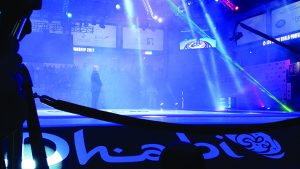 expense was spared as the entry way for the athletes consisted of smoke machines, music, and as Dr. Evil would say “laser beams”. The rock-star vibe was further enhanced by the media flocking to snap pictures of the red carpet arrival of high ranking dignitaries of state and members attending the event in suit-and-tie to take their seats in a VIP seating area. The arena was packed, the enthusiasm was off the scale, and the arrival of exciting jiu-jitsu action had come. Quick close out matches that featured male and female black belt finals and bronze medal matches dominated the first half of the day followed by a two-hour intermission. 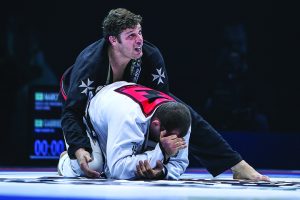 Coming off of the intermission, it was now time to go into the final stretch of the event and the highly anticipated Legends matches. Exciting Legend matches kicked off with heavyweights Marcio “Pe de Pano” Cruz going up against Gabriel Gonzaga and ending with a monumental rematch against true legends of the sport, Wellington Megaton vs. Helio “Soneca” Moreira.

After the Legend matches, the Adult Male Black Belt matches brought home the show with a storybook ending for UAE’s beloved Jose Junior of Brazil defeating Christopher Bowe of Ireland via points 2-0. A ceremony was given in which the champions of weight classes were medaled and belted. But that was only the beginning of the final ceremony that was ripped straight out of a Hollywood award show.

Later that night, all of the organizers and athletes cleaned up well to celebrate a season and two weeks of jiu-jitsu fellowship and competition at the extravagant Emirates Palace Hotel. Competitors were awarded their prize money for their appropriate finish in the final rankings. 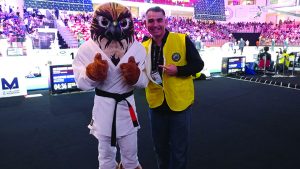 My take away from the ADWPC was that it was quite the experience to see the reverence that a small country in the Middle East has for the art of jiu-jitsu. It showed in every way – high-level competitors, massive media coverage, first-class staff, lavish awards – no stone was unturned in making sure that everyone had a special experience. The UAEJJF gracefully shows us that there are amazing possibilities for growth in the art of jiu-jitsu and that they are more than willing to be the ambassadors for that growth. And perhaps, just perhaps, we might one day see jiu-jitsu become an Olympic sport after all.