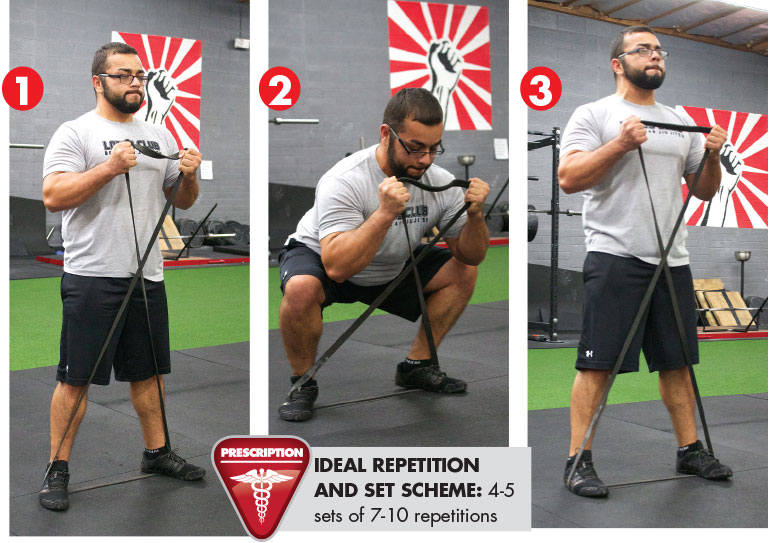 Imagine an inexpensive and versatile exercise tool that could be beneficial for everyone. It can be scaled down for those just beginning a strength training program to those who are advanced and in need of an additional challenge to their current program. A piece of equipment that can be taken anywhere when traveling and allow for a type of resistance that is different from what a free weight can provide. The resistance band offers just that, a simple and effective tool that can be included in anyone’s current exercise regimen. From football to MMA, bands are included in strength and conditioning programming for virtually all sports due to their effectiveness and versatility; jiu-jitsu should be no exception and bands should be utilized for several reasons.

As with many other sports, jiu-jitsu has quite a bit of lateral and rotational movement. You won’t always move your arms as you would a bench press or cable row; you won’t always squat and lunge with your knees and feet pointed directly in front you. Band Training allows us to train in various loads and planes which are not possible with free weight exercises. Pulling and pressing bands at different angles and loads has great carry over to the sport of jiu-jitsu. As you perform an exercise with a barbell, the load becomes easier to move in certain positions. This is apparent when you perform a squat; it is much easier to move a weight at the top of the movement compared to the bottom half. Bands allow for a different type of load known as “accommodating resistance.” This type of tension increases as you extend through a movement from a flexed (or shortened) position. Bands also teach stabilization and stiffness through major compound movements, such as squats and deadlifts. If you aren’t stiff and stable, you would be unable to complete the exercise through the entire range of motion. Band Buying From my experience Rogue Fitness and Elite Fitness offer some great quality bands that offer a strong value. The tension will vary based on the width of the band so one band may not be enough.  A mini band (1/4-1/2” width) is ideal for warm ups and upper body movements which have between 15-30lbs of tension. An average band (1/2-1 1/8”width) has 50-65lbs of tension can be used for the lower body movements as well as compound upper body movements. The strong bands (1 ¾-4” width) are used primarily for lower body movements and joint distraction have a tension between 100-200lbs. Depending on your level of strength, these bands will be the perfect addition to your toolbox.

Competitive jiu-jitsu can be highly stressful on the body, so when including strength exercises, it would be a wise decision to include some exercises that are low impact and not as taxing on the body, resistance bands offer just that. Below are some of my favorite band exercises for jiu-jitsu athletes. Whether you are an experienced lifter or new to strength training, these will undoubtedly add some challenge to your current routine.

This is similar to a traditional squat with a slight variation and increased difficulty. Stand over the band and cross it over, forming an “X” in front of you. Hold the bands in front of your shoulders. Your feet should be shoulder width apart with your toes pointed straight or with a slight external rotation. Begin the squat by breaking at the hips and knees while maintaining an upright torso. Squat as low as you are physically capable, while maintaining a neutral spinal position. The inward tension on your feet from the bands will allow greater glute activation and make the movement more challenging.

The Paloff press is an uncommon exercise that is very effective in training the abdominal and oblique muscle groups. Known as an “anti-otation” exercise, the tension from the band is producing a tension that is pulling laterally and your abdominal muscles have to stabilize in order to hold the band in front of you. This is particularly important for jiu-jitsu athletes as low back pain can be common and a strong and stable “core” is necessary. Begin by standing with a shoulder width stance, 1-2 feet away from the band attachment. Grasp the band with both hands and hold it firmly at the center of your body, aligned with your sternum. Brace your abdominal muscles and squeeze your glutes, while maintaining a neutral spinal position. In a quarter squat position, extend your arms directly in front of you without letting them sway towards the band attachment. Repeat on the other side. 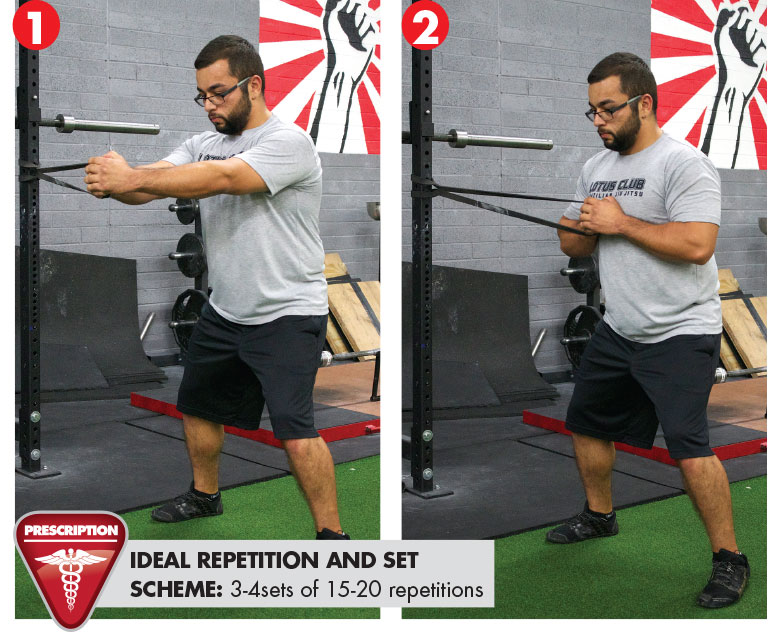 Push ups are a challenging exercise that strengthen the anterior chain, 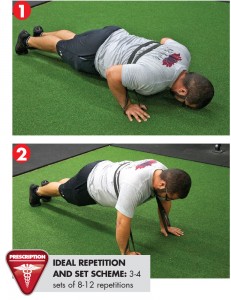 including the abdominals, pectorals, and anterior deltoids. As with other calisthenics, most people quickly adapt to the stimulus provided by bodyweight pushups; so it is necessary to find more challenging ways to perform them in order to see continued progress. Bands are an additional challenge to the exercise by creating more tension at the top position of the push up. Begin by lying face down on the floor with your heels together and hands beneath your shoulders. The band should be placed across your shoulder blades and the end of the bands under each hand. Squeeze your glutes and abdomen to maintain a neutral spinal position, not letting your pelvis sag down. Press away from the ground by extending your arms until they are completely locked out. Reverse the movement slowly until your chest lightly touches the ground while still maintaining full body tension.

Gracie Pro: Roger chokes Buchecha from the back; announces retirement

Naveed Shan is a Strength and Conditioning Coach at Siege MMA/Lotus Club BJJ in Glendale, AZ and Revolution Training Systems in Tempe, AZ. He trains under Giva Santana and is currently finishing his post-graduate studies in Exercise Science and Psychology at ASU. You can contact him at naveedshan.com