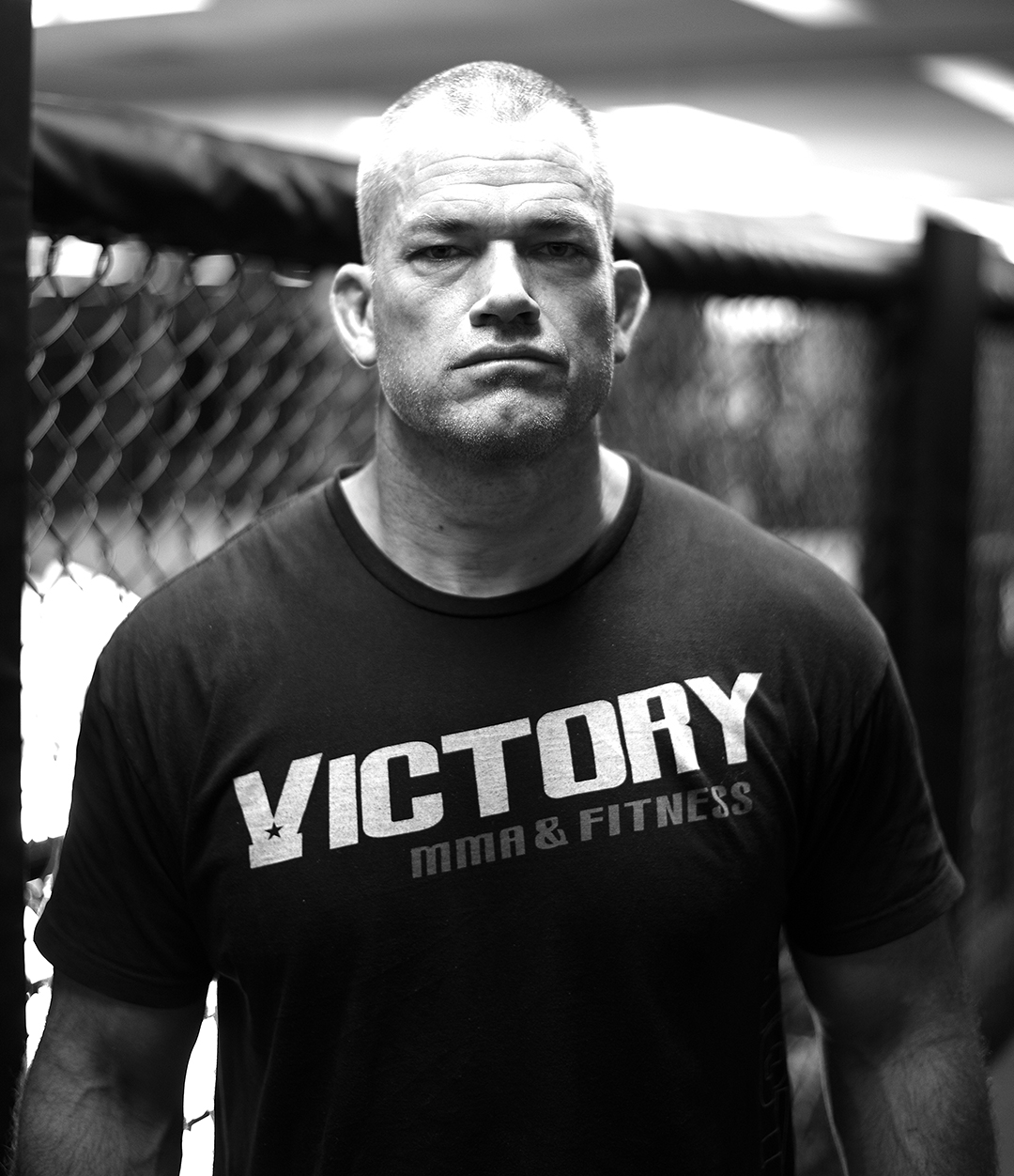 [This excerpt was taken from Issue 53]

Years ago, the first time I headed down to Victory MMA in San Diego to interview Dean Lister, I remember Dean mentioning the name “Jocko” a couple of times. Not wanting to sound like a newb I’m pretty sure I nodded my head and probably said something like “Oh yeah – Jocko…” Years later the exchange was out of my memory. It wasn’t until one day I saw an email advertising that week’s episode of the Tim Ferriss Podcast talking about the “Scariest Navy SEAL Imaginable”. After some investigating I found out the interviewee was John “Jocko” Willink. “How many Jockos could there be?” I thought. Listening to that podcast and discovering just who this mythical “Jocko” guy was was a true wake up call. We hear stories of men like this or see caricatures of them in the movies. Many have called Jocko a hero, including myself. But pin that badge on Jocko and he will be the first to tell you that he’s only man, a man amongst heroes, and to never forget them. Jocko is a retired United States Navy Seal who has received the Silver Star and Bronze Star for his heroic actions while serving in the Iraq War. In 2010, Jocko retired from the Navy and partnered up with fellow Navy SEAL Leif Babin to start Echelon Front to offer businesses practical, experience-based solutions from lessons learned on the battlefield. Along with running the operations of the business, Jocko and Leif do speaking engagements across the country. 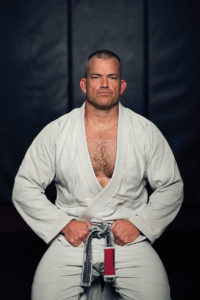 After hearing the podcast I immediately went out and purchased the book that Leif and Jocko co-authored, Extreme Ownership, and became a listener of the Jocko Podcast that launched at the end of 2015. The podcast is co-hosted with Echo Charles. Echo is a jiu-jitsu brown belt, a magician with a video camera, and an all around great guy. The podcast is not for the weak. Jocko will read from books that have impressed great points upon him through the years, many of which are related to the ravages of war. Jocko pulls no punches and conveys the harsh realities of war with detail and affect that I promise you’ve never experienced before short of being there. Along the way Jocko brings those and other life experiences into view and shares lessons that most of us can use in our everyday lives. During the podcast Echo chimes in to interject. Echo always seems to have that question that we all want the answer to. The podcast is in the “Business” category on iTunes, but it really falls under the “Your Entire Life” category, if that exists. So much of what Jocko talks about and the guests he has on adds value to every aspect of our lives, including our jiu-jitsu. Jocko is a black belt under Dean Lister and first started training the “jiu-jits” back in the early nineties before Royce Gracie entered the Octagon. A pretty good portion of every episode talks about jiu-jitsu in some way or another. If you’ve not yet listened, then you’re in luck. Most episodes seem to run about two and a half hours or so, multiple that out by the 62 episodes released and counting, and you’ve got a good six and a half days of listening to catch up on. 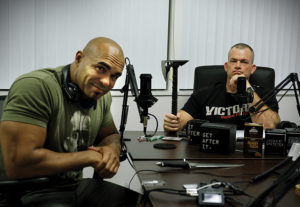 share with the boys (and girls) down at the academy. They say that you’re the average of the five people you surround yourself with. Listening to the podcast will not only make you tougher but also will raise that average and make you a better person for listening. I promise you. If after 10 episodes that’s not the case, you let me know and I’ll give you your money back for this magazine. Among the constant themes that Jocko espouses is the idea that discipline equals freedom. It might seem overly simplistic. However, when you dive deep into the idea and concept it seems to ring true in so many veins of life. Want to have the freedom to travel more or put some money away? Then be disciplined at work or school, at saving, and that discipline will reward you with the freedom you seek. Want to be better at jiu-jitsu, and want the freedom to hold your own on the mats with all challenges? Be disciplined in your training, train often, be disciplined in your diet, and how you treat your body. So many of the rewards and freedoms we want in life require discipline beyond the average and probably beyond what many of us put forth daily. 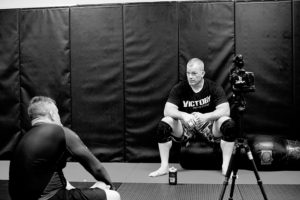 him. Having recently earned my black belt, my goal when visiting new schools is usually to just hold my own against other black belts and not embarrass myself. Let’s just say that rolling with Jocko was like getting struck by a freight train, and just when I managed to pick myself up, the 2 o’clock rolled in, then the 3 O’clock, and so on. Humbling and enlightening to say the least. The discipline Jocko speaks of is that self-discipline is inside us. He espouses that when we truly decide to make that change, the discipline within us will appear. But you must make that decision.

Enough of my rambling, check out some excerpts from our interview with Jocko along with some of his favorite techniques. Enjoy.

Jocko on Life and Jiu-Jitsu

JJM: What did you want to be when you were a kid?

JJM: How difficult was it getting through BUD/S (Basic Underwater Demolition/SEALS)?

BUD/S is fun. It’s fun, you get paid to work out. You get fed three or four meals a day, and it’s awesome. You’re down at the beach, you’re hanging out with a bunch of good dudes, and you’re getting after it, working out. It’s fun. It’s awesome.

JJM: How were you introduced to jiu-jitsu?

I came across jiu-jitsu in 1992 or 1993 and luckily for me there was an old SEAL Master Chief, and I call him old right now, but he was my age at the time. He’s an awesome guy, his name is Steve Bailey and he had been training with the Gracies up in Torrance, in their garage back in the day. When I showed up to my first deployment overseas, he was the Master Chief in charge of the command overseas and he asked us point blank, “Hey, who here wants to know how to fight?” and I said, “Well, I wanna know how to fight,” and he said, “Show up at this place.” and they had a little judo room and that’s how he taught us basic jiu-jitsu.

He was a high level white belt at the time, but in 1992 a high level white belt could beat anybody because he knew how to take someone down and how to either armlock them or get them to turn their back and get the rear naked choke. He was a good Muay Thai guy and a good stand up fighter, so it wasn’t like you were gonna stand and bang with the guy because he was gonna get you. You weren’t gonna wanna close the distance on him and when you did that, you were getting choked.

So that was my introduction and there were a few other guys that trained with me at that time. When we watched the first UFC those other guys and I that were training with at the time knew jiu-jitsu.

We didn’t know what we didn’t know, but we knew what a rear naked choke was, and we knew what an armlock was, and we knew what an Americana and Kimura was. We knew how to get the back, we knew how stay on the back so those basic principles. We definitely didn’t understand half guard or butterfly guard or spider guard, or even open guard, we didn’t understand those things. At that time I thought that jiu-jitsu was a finite thing. I thought there were forty-seven moves and once you know them, you know jiu-jitsu. I didn’t know you could not know all the moves, no one can.

JJM: How did Fábio Santos become your first instructor?

My buddy Jeff Higgs, who was another SEAL with me, who had started with Steve Bailey at the same time, but when we’d come back from that deployment, he’d gone out and found Fábio Santos.

It wasn’t right when we got back, maybe it was a deployment later, but at some point he started training with Fábio full time and he’d gotten his purple belt. The day he got his purple belt he came to my apartment and was like, “Hey, let’s go train,” and I said sure because we were even you know. I was probably a little bit bigger than he was, and he says, “Hey, let’s train,” and I said, “Cool, let’s go train”.

So, we went across the street in the grass and he was a purple belt and I was a white belt and we all know what happens there. He submitted me five hundred times and I couldn’t stop it and he said, “Yeah, I’ve been training” and I said, “Where? I’ll be there. I’ll go there right now.” And he says, “Well they’re closed today but go tomorrow.” So I went there the next day, signed up for unlimited classes, and started training the whole time with a whole core group of guys that I still train with all the time now. James Nilsen, obviously Dean Lister, then my main training partner for many many years and we all kind of came from that same group- Higgs, a couple other guys. There’s a core group of guys that came out of there and we still hang out and train.

JJM: During your time as a SEAL how often would you find yourself using jiu-jitsu, both mentally and physically?

Well, I think mentally you should be using jiu-jitsu all the time. I mean everything that you do in life is basically jiu-jitsu as far as I’m concerned. So, I use jiu-jitsu everyday in every thing that I’m doing. At this point it’s not like I think about it, but if I do think about it, I know where I’m getting these reactions to the world from. I’m getting them from jiu-jitsu and in combat scenarios you use jiu-jitsu on a fairly regular basis because you’ve gotta get control of other human beings that may be resisting on a wide variety of levels and what you’re trying to do them. So, it is something that you’re going to use on a regular basis…

[You mat find the rest of this interview in Issue 53]

Now on to a technique…

Over the years, Jocko’s grappling has been sharpened to a well rounded mix of jiu-jitsu within the rules to a mix of practical tactical positions. The techniques that Jocko shows us in this article are for the most part practical positions that you could use in a grappling tournament or on the street in a real life scenario. The first two that begin standing begin with a common wrestler’s tie-up. There’s no real world situation where Jocko would ever pull guard (our guess is that he’d never pull guard ever), but in these situations he closes distance quickly to engage his opponent and quickly get them under control.

Tie up To Cobra Choke or Side Control

Demian Maia Will Fight Woodley for the UFC Title; Learn Jiu-Jitsu From Him

Five days left to register! Big names heading to Tokyo for the opening of the 2017/2018 Abu Dhabi Grand Slam