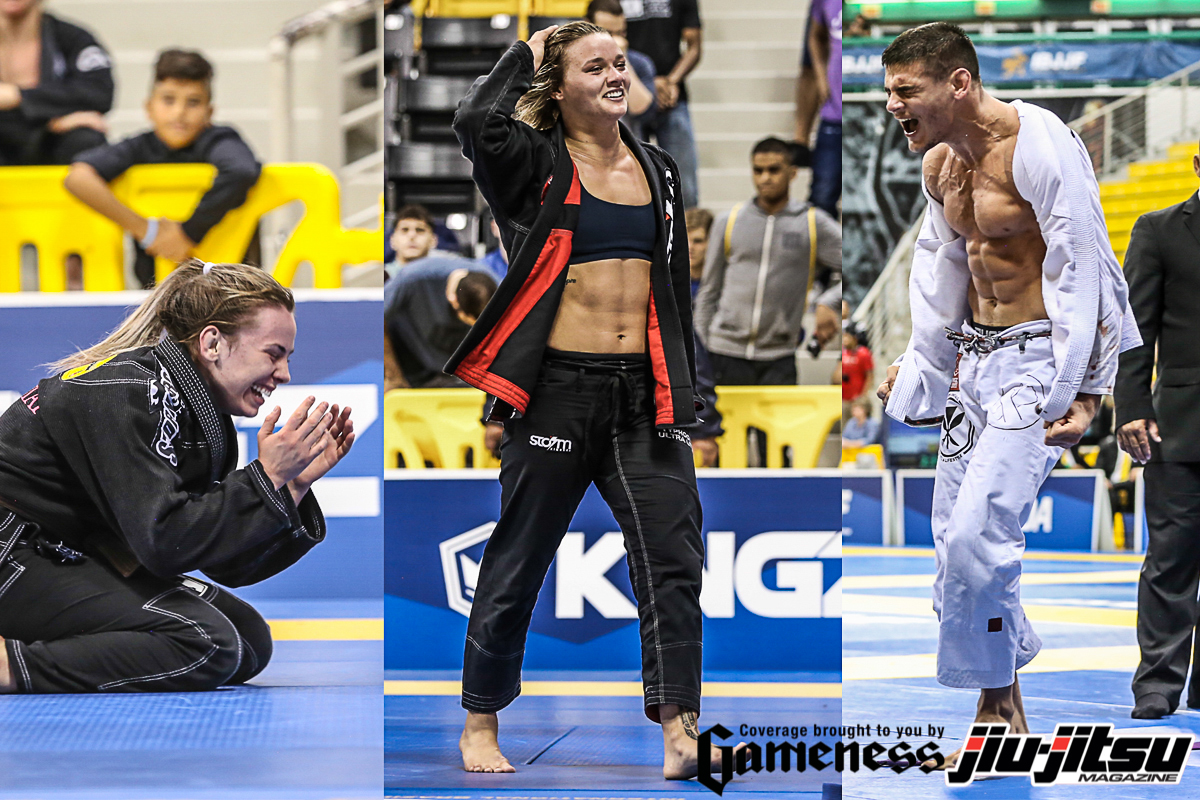 Day 2 in Long Beach put blue belts, purple belts and brown belts to fight within their division to to see who’s going to be the champion. Again it was a full day of thrills on the mat. The crowd at the stands in the Long Beach Pyramid enjoyed every second of its sty this Friday, June 2, 2017.

The highlights were the three open class brackets scheduled to close the day of matches this Saturday bat the World Championship. Once the brackets started to move, it was clear that the atheles would give their all to win their gold medal. Here’s how they did it .

In three matches, Andressa Cintra climbed to the top of the division. After beating Tara White in the opening round, she didn’t have to fight the quaterfinals against Jessica Ventura. In the semifinal, Andressa convinced the referees she was more active than Jessica Swanson to win via decision after a 0-0 tie. Andressa’s opponent in the final was Samantha Cook, who made to the gold medal match after a hard fought match against Sarah Rice, decided by a 4-3 lead on advantages. The final was another nail biter and once again Andressa took the win by referee decision. The victory at the open class completed a double gold campaign for Andressa, who also beat Samantha in the medium-heavy final.

In 2 days, Jonnatas Gracie fought 11 matches and won two gold medals. He’s a serious candidate for the title of athlete with the most fights at the 2017 Worlds. After winning the lightweight division this Thursday, in seven matches, Jonnatas came back to fight four more times and win the open class. He opened his campaign beating Pedro Pimenta and then Pedro Wiltse. The semifinal was against ultraheavy competitor Duzão Lopes. A near sweep close to the end earned Gracie a referee decision win after a 0-0 match. On the other side of the bracket, the ultraheavy champion Victor Hugo Marques beat Tarik Gopstock 9-0 in the semifinal to challenge Jonnatas for the gold medal. Unfortunately for Marques, the intensity of Gracie’s game was too much and Jonnatas was able reach a near guard pass, a near back take, among others, to score a 5-0 lead on advantages and take his second gold medal of the week. He also got a new belt, by being promoted to brown belt by his Professor André Galvão.

Under the guidance of his Professor and boyfriend Roberto Cyborg, Maggie Grindatti completed a perfect day on the mats with double gold after winning the open class and the medium-heavy division. In the absolute, Grindatti had 5 matches on her way to the gold medal. She beat Karen Naisoro, Gabriela Pereira, Nikki Griffiths and Maxine Knetter. In the final, she meet up with Chloe McNally. A guard pass earned her the three points that at the end of the match meant victory. At the podium, Maggie got her well deserved purple belt.

Off the mats, the main story was the design of the black belt open class brackets for the male and female divisions. Here they are. the fights kick off this Saturday, at 2PM (PT).

2017 Worlds: Here are the male black belt open class brackets. It could lead to @marcusbuchecha vs. @erberthsantos and @bernardofariabjj vs. @leandrolojj in the semifinals. Buchecha could have @alybjj or @matheusdinizjj in the quarterfinals while Erberth could face @cyborgbjj in the eighth finals and @jamespuopolo in the quarterfinals. On the other side, Bernardo could meet @luizpanza or @dillondanis in the quarterfinals while Lo could face @nicholasmeregali or @jgrocha. @felipepenabjj is a name expected to compete in the open class which is not on the bracket. Who do you think will be the champion? Coverage brought to you by @gameness_sports and powered by @gentleartmedia. #jiujitsu #bjj #longbeach #pyramid #2017worlds #worlds2017 #ibjjf #gameness #competition #jiujitsumag #coverage #photo #video #oss #gentleart #gentleartmedia #grappling #combat #news #champion #champion #blackbelt #day1

2017 Worlds: In the female black belt open class bracket, the design could lead to a final match between @biamesquitajj and @mackenziedern. To get to the final, Bia could have to face @biabasiliojj in the quarterfinals and @tayaneporfiriobjj or @talita_treta in the semifinals. On the other side, Dern could have to fight @jehflowersbjj in the quarterfinals and @nathibjj or @moniqueelias in the semifinals. Coverage brought to you by @gameness_sports and powered by @gentleartmedia. #jiujitsu #bjj #longbeach #pyramid #2017worlds #worlds2017 #ibjjf #gameness #competition #jiujitsumag #coverage #photo #video #oss #gentleart #gentleartmedia #grappling #combat #news #champion #champion #blackbelt #day1

Click here for the full results after two days of competitions.