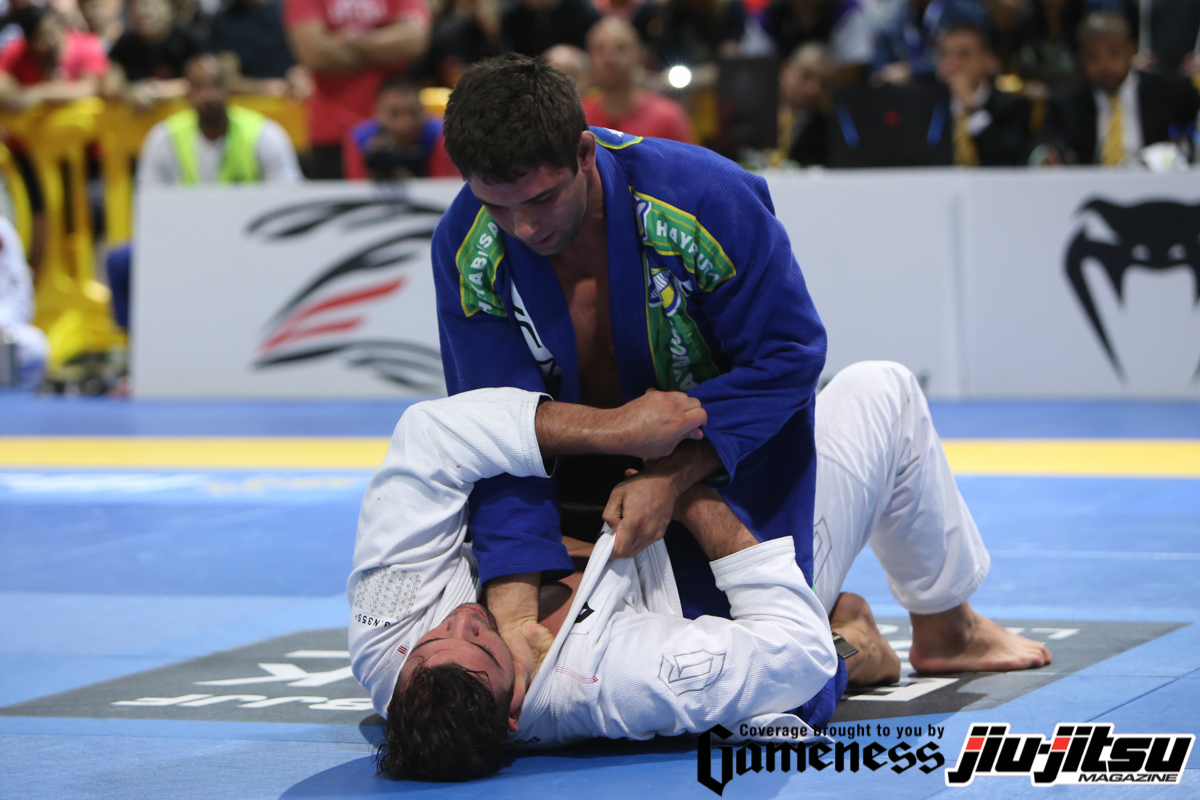 The IBJJF released this Sunday the official schedule and the brackets for all the divisions of the 2017 World Jiu-Jitsu Championship. We take the opportunity to focus on the adult black belt division and try to predict how each weight class will play out. As with any sporting competition, it is possible to point out safe bets for the outcome of each bracket, but it is also certain that every competition holds in itself a huge possibility of unpredictable events playing a big role in the outcome. Here we go with a quick analysis of each black belt weight class.

With 13 competitors, the division is packed with talent. Eight times world champion Bruno Malfacine and two times world champion Caio Terra are on opposite sides of the bracket and will clash only in a eventual final. It is hard to see any other athlete in the bracket likely to disrupt another Malfa vs. Caio battle for gold. If that happens, the Alliance representative is the favorite when you take in consideration the recent results of their matches.

Twenty four athletes signed in to compete. Ary Farias will be defending his recently confirmed gold medal (after Paulo Miyao lost the title due to a positive result in a USADA test). João Miyao will be battling to take the gold medal back to the family. Mikey Musumeci wants to make a crack in the Brazilian domination. Kim Terra, Samir Chantre, Issac Doederlein and Hiago George complete the list of athletes with chances to be in the final. Ary and Chantre could clash in the quarterfinals on their way to face the winner of Mikey vs. Isaac. On the other side, Kim and Hiago will probably clash to face Miyao in the semifinal.

With 25 competitors, the division has once again the potential of being one of the most exciting weight classes of all. Four times world champion Rubens Cobrinha got lucky in the bracket design and saw all the main opponents on the other side. Marcio André, Gianni Grippo, Osvaldo Moizinho and AJ Agazarm will probably clash for the other spot in the final. AJ and Moizinho could meet in the eight finals and the winner battle Gianni in the quarterfinals to decide who fights André in the semifinal. In an eventual gold medal match, André carries a slight favoritism over Cobrinha, but the match should be decided by a narrow margin. André would be only the fourth different featherweight champion in 11 years, joining Cobrinha (2006-2009), Rafael Mendes (2010-2012, 2014-2016), Augusto Tanquinho (2013).

It’s another weight class stacked with talent. Twenty eight athletes paint the bracket as one of the toughest ones to negotiate. The first thing that jumps out of the screen is the fact that the 2016 final will not repeat itself. Strangely, Edwin Najmi is on the same side as Lucas Lepri, causing the two to meet in an eventual semifinal. Before that, tough, Lepri will most likely have to face Diego Bispo and Michael Liera. Najmi will have Kevin Mahecha and Gabriel Rollo as his main opponents. On the other side of the bracket, three times world champion Michael Langhi could face Roberto Satoshi or Marcelo Mafra in the quarterfinals to eventually face off with Andris Brunovskis or Celso Venícius for a spot in the final.

With 29 competitors, the middleweight is the most populated of all black belt weight classes. It is also the toughest one to predict an outcome. Three times world champion Otavio Sousa will most probably have Vinicius Marinho or Mansher Kehra in the quarterfinals. Victor Silvério, Nathan Mendelsohn, Magid Hage and Marcos Tinoco are the most likely to battle for the spot in the semifinal against Otavio. On the other side, it gets even tougher. The 2016 finalist Gabriel Arges will have to negotiate Jon Satava first and then probably Vitor Oliveira in the quarterfinals. Isaque Bahiense, Josh Hinger and Manuel Ribamar are the ones most likely to battle for a spot in the semifinal against Arges.

Insanity! That’s a fair assessment of the amount of talent on the bracket. You have three world champions in André Galvão, Romulo Barral and Tarsis Humphreys. You have Felipe Pena, who won everything in the past 12 months. You have upcoming talents like Lucas Barbosa, Horlando Monteiro, Dillon Danis and Patrick Gaudio. It’s just crazy how competitive this bracket will be. Galvão and Pena are the favorites to meet in what can only be defined as an explosive grudge match semifinal. Barral will most likely have to beat Lucas or Dillon to make to the semifinal against the survivor of the other side that includes Tarsis, Inacio Neto, Thiago Sá, Patrick and Lucas Rocha.

Leandro Lo vs. Nicholas Meregali is what people want in the final (well, most people). Certainly, the other 17 competitors will fight hard to get in the action as well. Lo will have to negotiate Aaron Johnson in the eight finals, Matheus Diniz in the quarterfinals and most likely Jackson Sousa in the semifinal. Meregali will have to overcome Lucas Leite in a probable quarterfinal match and then Adam Wardzinski in another hair raising semifinal.

Thirteen competitors and the potential to be one of the most explosive brackets of all. Luiz Panza, Jared Dopp, Bernardo Faria on one side. Erberth Santos, Roberto Cyborg and Mahamed Aly on the other side. It’s hard to say what’s going to happen, but it is easy to predict that it’s not going to be boring. Panza and Bernardo would be the safest bet for one of the semifinals, while Erberth will most probably face the survivor of the Cyborg vs. Aly war.

The heaviest division is also incredibly stacked with talent. Unfortunately, the bracket design took away the possibility of a final between Marcus Buchecha and João Gabriel. They will most probably meet in one of the semifinals, just like last year. On the other side, Alex Trans is back for another try at his first gold medal as a black belt at the Worlds. The Danish will have to face Gabriel Lucas and then probably Rodrigo Cavaca in the semifinal.

Two times black belt world champion Rikako Yuasa is back for a third title. The small but powerful and incredibly talented Japanese is the women to be beat in this division. She will fight twice in long Beach to take home the gold medal.

Three times black belt world champion Gezary Bandeira is the favorite, but Talita Alencar is the new factor in then 9-women bracket. Thamires Aquino is Gezary’s most probable semifinal opponent while Kristina Barlaan and Liwia Gluchowska will battle to face Talita in the other semifinal.

Mackenzie Dern is the favorite as long as she has no issues with her weight. She competed as a middleweight at the very recent San Diego Open. If Dern beats the scale, she will be in the final, most likely against new talent Bia Basilio.

The most crowded female black belt division is also the one with the largest amount of talent. Bia Mesquita has been on fire and is the clear favorite here, but she’s going to have a tough time to make it to the top of the podium. Jesica Santos should be Bia’s semifinal opponent. On the other side, Tammi Musumeci is the favorite to make it to the final, but she’ll have to overcome Luiza Monteiro in the semifinal.

If everything goes according to plan, Monique Elias and Ana Carolina Vieira will meet in the final. It’s hard to see another outcome in this bracket, despite the efforts of the other six competitors.

Andresa Correa and Nathiely de Jesus are the favorites here. Jessica Flowers could be trouble for Nathi, while Andresa has a more manageable side of the bracket.

With five competitors, the title will most likely be decided between three times black belt world champion Fernanda Mazzelli and one time world champion Talita Nogueira.

Tayane Porfirio fights once against Venla Luukkonen for a chance to become a black belt world champion.