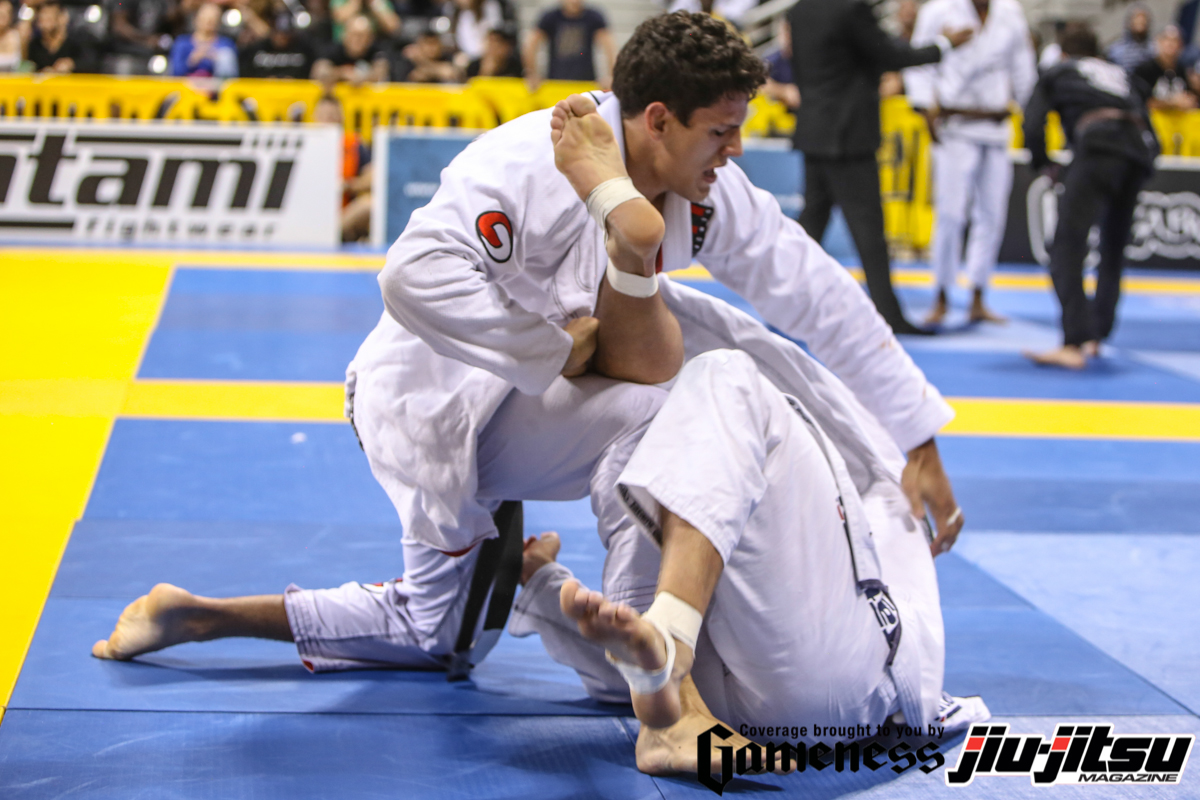 Every year, as we browse through the final list of black belts signed up for the World Championship, we wonder who the champions will be. Every division has a safe bet name, but this time we will go out on a limb and point out 15 names yet to have won their first gold medal at the worlds in the black belt division. Maybe 2017 is their year. Here are the 15 names most likely to rise to the top of the podium in a week and a half.

Mikey Musumeci (Light-feather): The American now training under the direction of Caio Terra is having a great year. He just won the 62kg division at the 2017 ADWPJJC with a powerful performance. He also won the light-feather division at the 2017 European. João Miyao, Kim Terra, Ary Farias and Hiago George are the biggest obstacles in Musumeci’s way to gold.

João Miyao (light-feather): With his brother Paulo suspended for doping, João is free to compete as a light-feather and finally win his gold medal at the Worlds as a black belt. He lost to Bruno Malfacine twice in the past two years, when he had to compete as a roosterweight. Maybe in his natural weight class João will be more lucky.

Marcio André (Featherweight): The retirement announcement by Rafael Mendes must have been met with huge praises at Marcio André’s camp. Rafa’s decision made the run at the gold medal much less arduous for everyone in the division. The runner-up in 2016, André is one of the two main favorites alongside Rubens Cobrinha.

Edwin Najmi (Lightweight): The American wants to become the fourth male athlete born in the USA to own a world championship gold medal. He made it to the final in 2016, but was no match for Lucas Lepri. Since then, Najmi has competed everywhere and his performances back his claim that he’s much more mature and much more ready for a second go at the medal he craves so bad.

Isaque Bahiense (Middleweight): To become a middleweight champion is like climbing the Everest. The division is famous for always being one of the most stacked of all black belt divisions. That’s the case in 2017 and Bahiense is right there in the mix. The Alliance athlete may still be a little green for the title, but cannot be overlooked by the most well known names as a true threat in the bracket.

Gabriel Arges (Middleweight): The Gracie Barra athlete is another huge talent coming out of Romulo Barral’s black belt factory. In 2016, he finished second in a close out with teammate Otavio Sousa. Maybe in 2017, he gets to be the champion if both reach the final once again.

Felipe Pena (medium-heavy): If Pena wants to definitely write his name among Jiu-Jitsu’s greatest of all times list, 2017 is the year he can do it. It seems he’s doing everything right so far. The first gold medal at the Worlds as a black belt will be the highest point in his young and brilliant career. Closing the division with his Professor Romulo Barral would be a dream come true.

Nicholas Meregali (Heavyweight): He won it all in the lower belts and he also took his time to become a black belt (well, his Professor Mario Reis made him take his time). After years of building a big reputation as one of the most talented athletes of the new generation, Meregali has arrived. In 2017, he’ll have to negotiate one of the toughest brackets of all. Leandro Lo, Adam Wardzinski, Luca Leite, Nick Shrock, Matheus Diniz are a few of the names Nicholas will have to overcome to win his first gold medal as a black belt.

Erberth Santos (super-heavy): The black belt people love to hate has had a brilliant year so far. Erberth arrives at the 2017 Worlds after a head to head run for the first place in the IBJJF ranking with Leandro lo (which he lost by 3,5 points). In 2016, he came just short of winning the open class, but could not even make to the division final. This year, he wants to go all the way.

Luiz Panza (super-heavy): Two times silver medalist in 2013 and 2016, Luiz Panza wants to join the world champions’ club this year. After coming back from a nasty leg break in 2015, Panza is looking very strong for another run at the top of the podium in 2017.

João Gabriel Rocha (ultraheavy): Who can beat Marcus Buchecha? Your best bet in the division is clearly João Gabriel (followed closely by Alex Trans). The cancer survivor is much more than an inspiring story. He is also one of the most accomplished athletes of his generation. The gold medal at the Worlds (beating Buchecha) would certainly take João to another level.

Talita Alencar (Light-feather): Fast, strong and lethal. Three words to describe Talita’s game. She’s been very successful this year and a title in the 2017 Worlds would be the finishing touch in a brilliant season. Gezary Matuda and Kristina Barlaan are the two biggest obstacles in Talita’s way.

Tammi Musumeci (lightweight): She has almost all figured out to win her first gold medal at the Worlds as a black belt. The only thing missing is how to beat Beatriz Mesquita. If Tammi finds an antidote to Bia’s powerful game, 2017 could be her year.

Ana Carolina Vieira Srour (Middleweight): Ana Carol rose like a rocket, winning it all in the lower belts. Unfortunately, a serious injury sidelined her right after she got her black belt. This year will be first one she’ll be healthy to compete at full capacity at the Worlds. If everything goes right, Rodolfo will no longer be the only black belt world champion in the Vieira Srour family.

Tayane Porfirio (Superheavy): Tayane is the women to be beat in the female division. She is the favorite in an eventual open class bracket. She should have no major problems to win her first gold medal in her weight class and has big chances to walk out of the pyramid as a double gold medalist.