A few issues ago, we did a review of Flow Kimonos’ Hemp Gi. Now we’re bringing you a review of their line of hemp belts! These belts are crafted with the same artisanship found in Flow’s kimonos. A high-density cotton webbing core (as opposed to foam in other belts) is used inside the belts. This gives the belt a sturdy feel. The outer layer is 100% 330 GSM hemp twill. Each ream of hemp is rolled out, stacked, pinned down, and then cut by hand. These cuts are precisely made down to the millimeter. The webbing and hemp are then sewed together using a 30s/3 polyester sewing thread. The production team at Flow has combined its experienced staff with modern computerized sewing equipment to then meticulously sew each belt together. Finally, each belt undergoes quality control inspection to ensure each belt is manufactured to specification! 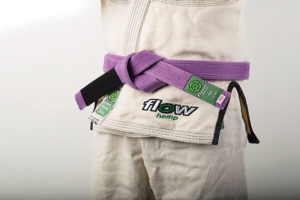 This is one of the highest quality belts I’ve seen. If for whatever reason you didn’t want to get a hemp gi, I’d recommend at least a hemp belt. Hemp is an amazing material that still has a stigma attached to it because of its relation to the cannabis plant. There is, however, no psychoactive material in hemp. In other words, you can’t get high off of it. The material has properties that would come in handy for jiu-jitsu belts.

Many students choose not to wash their jiu-jitsu belts. The idea stems from the notion of washing a belt equates to washing away knowledge, or so the superstition goes. Flow’s hemp belt is the perfect solution! Hemp is a natural antimicrobial material and has anti-odor properties. It’s the perfect belt for those who don’t want to wash their belts of fear for loosing their hard earned jiu-jitsu knowledge. If you decide to wash the belt, you will need to account for 1”-2” of shrinkage.

The cotton webbing will give the belt a more ridged feel. It may also be a little more difficult to tie because of its stiffness but you will get use to it once it breaks in. It’s a heavy duty belt so don’t expect it to break in right away. After about a week or two (depending on how often you train) you will notice the belt soften up. Think of it like a baseball glove. When you first buy one it almost seems unusable. After breaking it in, it becomes an extension of your body. The belt feels a little different when you first roll with it, but you will get uses to it quickly and not even notice it.

After a few weeks of training, I noticed the belt begin to age. It’s become softer as I mentioned before, but the color ages as well. This is especially true of the belt’s outer edges. It gives the belt a nice aged look which shows experience. I tested the purple belt and after one week I thought the belt was broken in nicely, and after two weeks, I already started to see the cool age effect. I can’t speak to the coloration of the other belt colors. Time will tell if the color change is an issue or not. It’s worth noting that the belt took up more space in my bag. It doesn’t fold like other belts so it’s something to keep in mind if you store your belt in a unique way.

I’m impressed with Flow’s hemp belt. At a $50 price point, it’s a little more than other belts, but when you consider how long you have a belt, how often you wear it, and take into account hemps antimicrobial properties, $50 isn’t bad. I would recommend these belts to anyone who trains frequently and looking for something that will age nicely with the student’s progress.