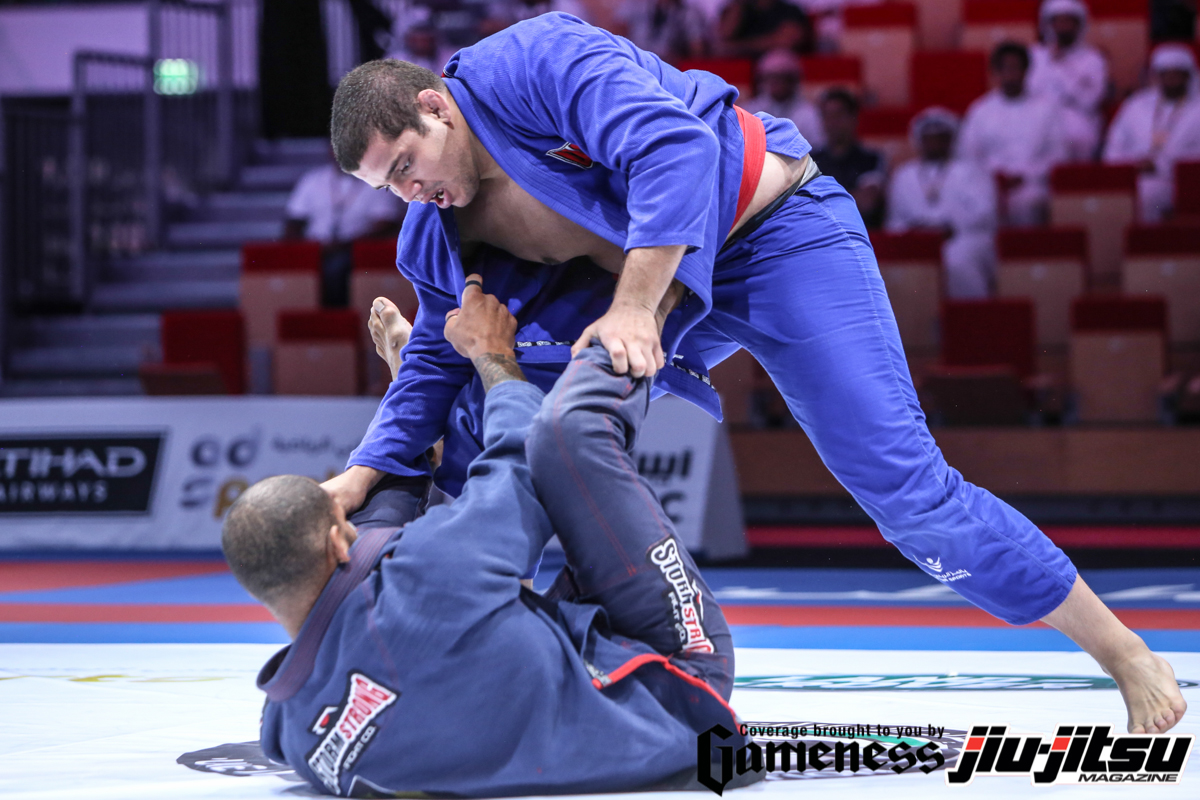 The black belts once again delivered a great day of matches this Friday at the 2017 Abu Dhabi World Professional Jiu-Jitsu Championship. In every weight class, competitors fought hard to reach the much desired gold medal match. Here’s how each bracket played out. The finals and the bronze medal matches take place this Saturday, starting at 11AM local time (midnight in Los Angeles, 3AM in New York.)

56kg – With only three athletes in the bracket and two of them being Brazilians, the final was decided by the victory of Rodnei Junior over Wellington de Lima. Rodnei will fight Japan’s Todokoro Masaaki for the gold medal this Saturday

62kg- With five athletes and a all against all system, each athlete competed four times until the final was set. Michael Musumeci beat his four opponents to secure the first place. Brazil’s Cleber Fernandes and Hiago George won two matches and lost another two, but Fernandes ended up with the second place.

69kg – Tiago Bravo and Gianni Grippo made to the final after beating their countrymen in the semifinals. Tiago beat Talison Costa 4-2 to reach the final while Gianni had to overcome the always tough Isaac Doederlein with a narrow lead of 2-1 on advantages.

77kg – Gabriel Arges fought twice to reach the final. First he caught Akira Hosokawa with a rear naked choke in the quarterfinals. The semifinal was against Isaque Bahiense, and two advantages were enough to secure Arges’ place in the final. Najmi first managed a triangle choke on Hamzed Al Rashid and then finished Oliver Lovell in the quarterfinals. Najmi came back to outscore Jon Satava 2-0 in the semifinal and meet his teammate Arges in the gold medal match this Saturday.

85kg – Local favorite Faisal Al Kitbe was on fire this Friday. He fought twice to reach the final. First he outscored Thabet Al Taher 2-0 in the quarterfinals and then beat Ross Keeping 8-0 in the semifinal with a powerful performance. Faisal’s opponent in the final will be Brazil’s Claudio Calasans Jr, who first outscored Kit Dale 4-2, then choked Michael Tremblay and finally beat Marcos Costa 2-0 in the semifinal.

94kg – Felipe Pena had two fights to make it to the final. First he beat Abdurakhman Bilarov 8-2 in the quarterfinals. Then, he met Xande Ribeiro in the semifinal. Xande got there by finishing Basel Fanous with a bow and arrow choke. Pena secured his spot in the final with a 1-0 lead on advantages over Xande after a very strategic match. Pena’s opponent will be the always tough Adam Wardzinski, who got to the final by outscoring Diego Herzog 14-7 and then benefiting from a WO win over Piotr Wojtkowski.

110kg – Jose Junior had a lot at play on his campaign this Friday. He got to the final after two matches. He first beat Manuel Pontes by penalties and then met up with Erberth Santos in the semifinal. Two sweeps were enough for the 4-0 lead, the spot in the gold medal match and also to secure the big prize as the UAEJJF’s ranking leader at the end of the season. Ireland’s Chris Bowe will be Junior’s opponent after he beat Antonio Junior and then outscored Manuel Pontes 1-0 on advantages.

49kg – In another all against all bracket, Mayssa Bastos beat all her four opponents. Japan’s Rikako Yuasa beat three opponents but lost to Mayssa, settling with the second place. Bronze medal went to Liwia Gluchowska.

55kg – Talita Alencar fought only once to make it to the final. She beat her countrywoman Thamires Aquino 1-0 on advantages. Vanessa English made to the final by finishing Japan’s Mei Yamaguchi and then outscoring Amal Amjahid 2-0.

62kg –  Tammi Musumeci won her two matches on her way to the final. Tammi’s victims were France’s Laurence Cousin and Australia’s Jess Fraser. Bia Mesquita got to the final by outscoring Luiza Monteiro 6-2. Tammi and Bia meet in the final this Saturday.

70kg –  Ana Carol Vieira debuted with a 7-0 win over Fiorella Coto and then met Brazil’s Priscila Cerqueira in the semifinal. A guard pass was enough to build a 3-0 lead and secure the spot in the final. Amanda Benavides will be Ana’s opponent after she finished Clara Dufau and beat Claire Thevenon by referee decision.

90kg – Nathiely de Jesus and Talita Nogueira will meet in the final after three matches for each this Friday where they beat all of their opponents.

Go to our Instagram Page to learn more about the matches.

Follow the coverage of day 5 on our social media channels, brought to you by Gameness and powered by Gentle Art Media.