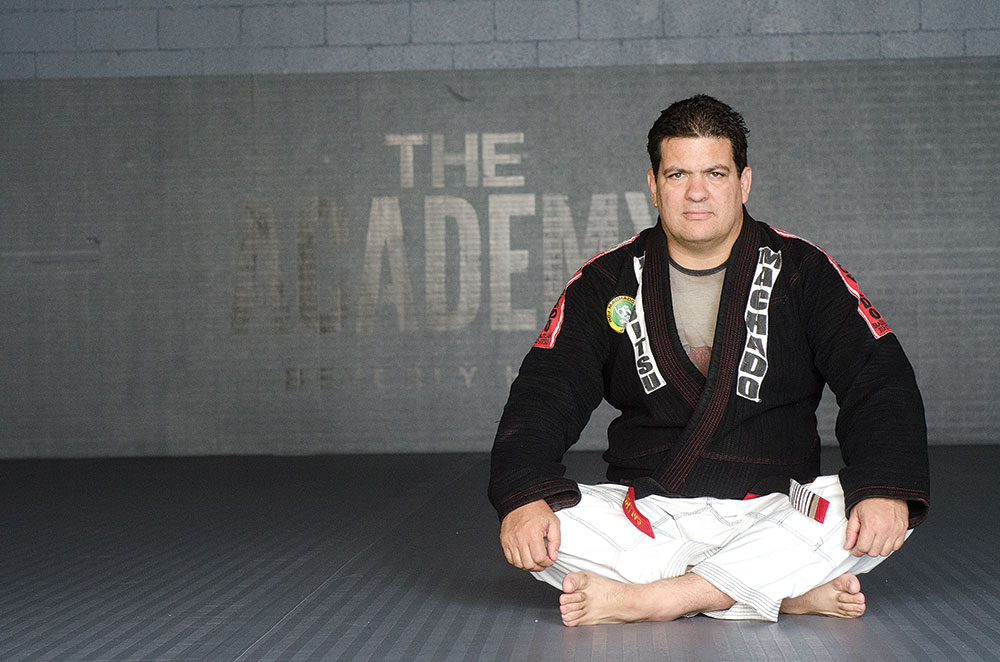 BIG Plans Ahead
Eighth degree red and black belt, Master Rigan Machado has some big plans for the Brazilian jiu-jitsu community and when I say, “Big,” I mean BIG! If you’ve ever met Rigan or have had the opportunity to spend some time with him, you know he only thinks in grand terms if there is anyone that the ability to pull momentous feats off, it’s him.

Rigan’s Roots
Rigan’s been around jiu-jitsu his entire life. Nephew of legendary Grandmaster Carlos Gracie, Sr. and brother to Carlos, Jean Jacques, Roger and John Machado, Rigan couldn’t help, but be extraordinary in the gentle art. Growing up, he was lucky enough to train under the tutelage of Rolls Gracie and Master Carlos Gracie, Jr. He trained with his four brothers and his Gracie cousins, Rickson, Rorian, and Rillion (to name a few), and his uncle, Carlos Gracie, Sr. Between the ages of 14 and 21, Rigan won the Brazilian National Championships (the equivalent of the World Championships) every year, in every belt. On top of that, he set a record for competing in 19 jiu-jitsu matches in one day, finishing all of them by submission. Overall, he racked up an astounding record of 365 wins and 2 losses during his competitive career. 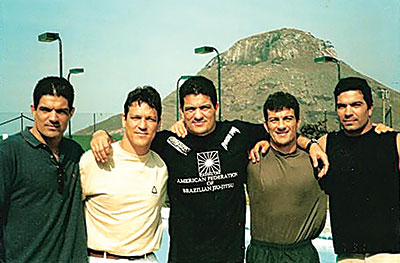 Academy of Beverly Hills / Celebrity Connections
Currently, Rigan owns and operates the Academy of Beverly Hills where he has made a name for himself training various Hollywood celebrities in jiu-jitsu for their parts in movies and TV roles. Ashton Kutcher, Vin Diesel, Keanu Reeves, Charlie Hunnam, and Ziggy Marley are just a few of the big names he instructs on the mats. He was recently nominated for and won an award in Beverly Hills for his martial arts contribution in the film industry and he informed me that he’s currently set to play the lead in a martial arts film…and of course, he’s playing the bad guy! 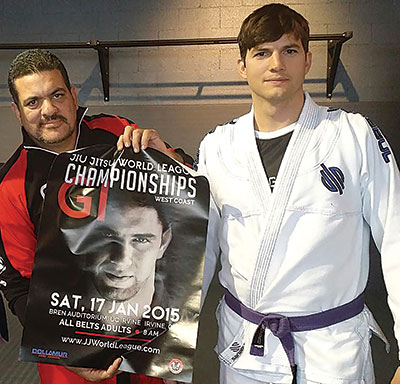 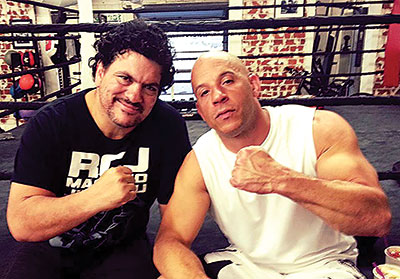 World Jiu-Jitsu League
Rigan has big plans to bring jiu-jitsu to the world to a much lager stage – television – but in the meantime, while that idea is percolating and negotiations are underway, he and Mathew Tinley, recently kicked off their first World Jiu-Jitsu League tournament at the Bren Center at UC Irvine. The turnout was on the smaller scale, which was a good thing because it allowed him to fix any issues that arose right at that moment and make a mental note to ensure they don’t happen again at their next tournament in Las Vegas, in May. Overall, Rigan said he was very happy with the results. The event had some really unique characteristics that set it apart from the rest. The World Jiu-Jitsu League showcased new aggressive rules that you can see here: http://youtu.be/s3IcJhEETvU, Tournament 360 ran their scoring very professionally, the red and black World Jiu-Jitsu League logoed mats were beautiful, the sound system played upbeat music all day long and a few celebrities, like Ashton Kutcher, Michael Dudikoff, karate legend Robert Wall, and Jean-Claude Van Damme’s daughter, Bianca Bree Van Damme showed up to help usher in Rigan’s debut event (as an aside, Bianca told me that Rigan is like an uncle to her. She said that he was always at her house growing up, hanging out with her dad, the legendary Jean-Claude Van Damme). The World Jiu-Jitsu League also paid out cash to black belt winners, which is a departure from what the athletes are used to receiving… which typically is nothing. 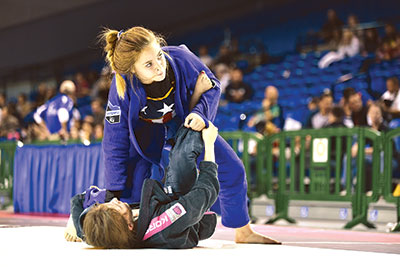 World champion black belts have long been complaining that the sport of jiu-jitsu is professional, and should be treated as such. They train like professionals, dedicating their lives to the art, but they don’t get paid for their efforts like most professional athletes do. Rigan is seeking to change all that. One such athlete who is no longer complying with the lack of professional status at tournaments is black belt world champion Marcus “Buchecha” Almeida who has dug his heels in on this issue and says he’ll only compete for money (except for the Worlds – he told me he will always be at that one big IBJJF event). Rigan capitalized on this and has made Buchecha the poster boy for the World Jiu-Jitsu League. He will pay him like a professional to promote his venture and compete in it as well. At the tournament in January, Rigan paid out $11,000 in cash prizes to those black belts who won their open divisions. Yuri Simoes and Vitor Oliveira each collected $5,000 for their respective categories, while Karen Deisy picked up $1,000 for hers. 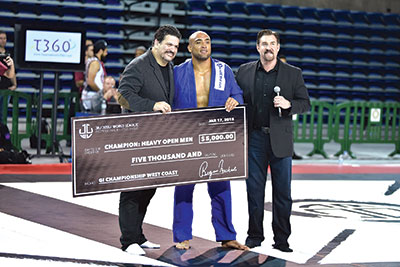 Recently, I got to spend some time with Rigan. I asked him a few questions about his upbringing, his jiu-jitsu, his academy in Beverly Hills, his celebrity connections, and his future plans. This is what he had to say:

What was your relationship like with Grandmaster Carlos Gracie, Sr.?
He was my Uncle; my aunt was married to him. I started training at 5. I was dyslexic and Uncle Carlos got me training and helped me with my nutrition. He helped me overcome the problems I had. I graduated from school; I became a great student and competitor. I was very close to Carlos, Sr. I lived in the Gracie house. I had the opportunity to follow him for 9 years. He made me feel like he was my stepfather. I looked up to him like a father. His kids are like my brothers.

Who were your coaches on the mats growing up?
My coaches were Rolls and Carlos Gracie, Jr. I was 16 when Rolls died. I love his family. I grew up with Rickson, Renzo, Royler, Rillion…that was my generation; that was who I hung out with.

When did you get your black belt?
At 17. I won the Brazilian Nationals (the Worlds) 3 years in a row in the open and in my weight at blue, purple and brown. I was 185lbs at blue and 195lbs at purple to black belt. I moved to America and went all the way up to 235lbs – super heavy weight. I was a vegetarian and then became a meat eater! Carlos Gracie, Jr. was my main coach. I was his first black belt at the Barra Academy. I was his first champion and his best champion for 8 years.

Tell me about your relationship with your brothers.
The one thing I created with my brothers is that we protect each other. I created the philosophy to leave the ego outside the family. I’m not better than anybody. There is no greed between the brothers. We support each other. When you create these ideas, you follow them and pass it on to your students. My brothers and I have a love relationship with each other. When there is too much fame, power or money… if you don’t have a leader to guide you or some philosophy to hold you together, your ego is going to get the better of you. This is why I tried to create this union between all of us Machado brothers. By myself I’m just Rigan, but with my brothers, I’m one of the Machado Brothers. I’m one teacher of five teachers; one champion of five champions. It sounds stronger and better with them. I’m nobody without my brothers. I’m number three…in the middle. I have very good communication skills and I try to get us all to create loving relationships with each other.