Most jiu-jitsu practitioners can recall their first days of training, falling in love with the art, and expressing the desire to start training as often as possible. For most jiu-jitsu beginners, the intent is to be there frequently, training hard in order to maximize progress and get ahead of the others who have already been putting in their time.

There are a good amount of fortunate beginners out there that have the flexibility of schedule to train everyday, and a few who have the great fortune to train multiple times per day, several days per week. This is opportune for some practitioners, but unfortunately for the human body, training more often than you probably should could have some negative consequences.

Too Much, Too Soon

The goal for most beginners is to develop their skillsets quickly. Every person signing up at the academy wants that black belt, and they want it sooner rather than later. Nobody wants to be the rookie white belt. This is a 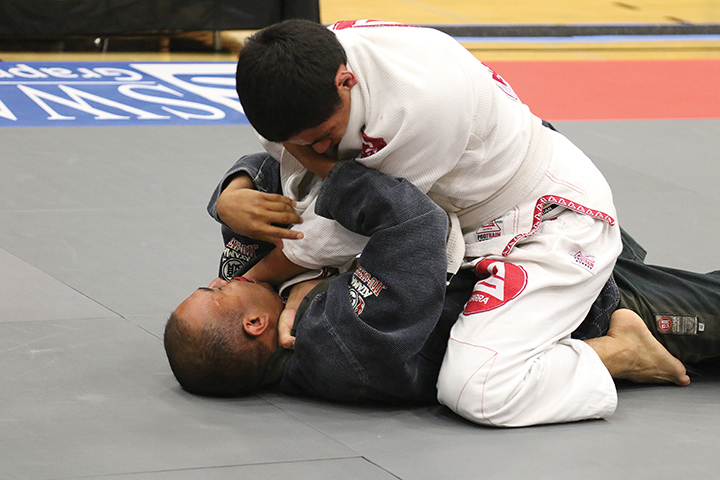 completely natural tendency for brand new white belts to do too much, too soon and overexert themselves. The rationale is that the overexertion will get them closer to their goals. The irony is overexertion may actually do more harm than good.  You will see this in white belts that are present for almost every class during that first week or two. The third week, however, they have disappeared and are already taking time off to rest. When asked why, the reply is usually some type of minor injury that they will need to heal for a week before coming back. Then they come back. And then they are gone again. The cycle continues until they either quit, or they figure out how to train more effectively and efficiently for the long-term.

There are many obstacles that arise from doing too much too soon in jiu-jitsu. Any jiu-jitsu practitioner who has been at it for a while can attest that jiu-jitsu requires a remarkable amount of patience and hard work. A slow, smooth, and consisten 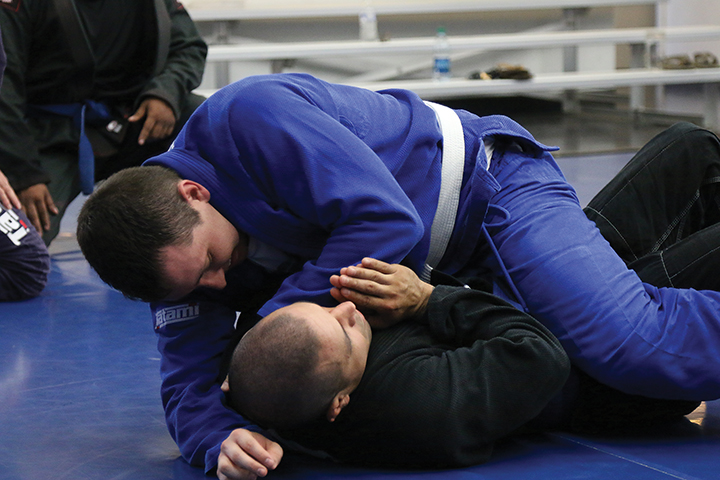 t dedication to the craft, plus methodically and systematically honing your skills is the correct approach for most people. Of course, there are outliers. These are the prodigies, the cosmic lottery winners with great genes, and other gifted athletes who excel at a much more rapid clip than others, but these are very rare and exceptional cases. If you are like most people within the bell curve, slow and steady wins the race.

Burnout is one of the many mental perils overexertion can cause. When you are doing way too much way too soon, you can undergo such a 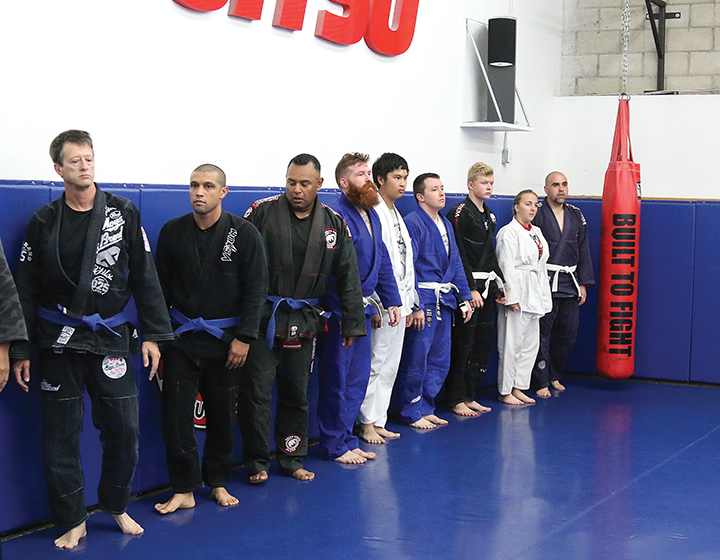 tumultuous mental fatigue that it will affect a variety of psychological processes like mood, desire to train, and self esteem. Depression, for example, is a good signpost for overtraining and if you notice changes in your mood, sleep patterns, libido, or even daily stress levels, you may want to take a step back and assess your training regimen.

White belts can feel such an overwhelming desire to achieve optimum levels of proficiency in such a short span of time that the mind goes through an increased emotional and cognitive load. Overwhelming the brain is never a good thing. If the mind is overworked, more stress is endured and the mental capacities to regulate emotions and other bodily functions are significantly compromised. Also, when you are burned out, your performance is hindered. This can be even more stressful to your body and mind, and you may end up feeling like you are having more bad training days than good ones.

Jiu-jitsu is supposed to be fun and rejuvenating if you are doing it right. This may be different for athletes and other competitors who put more of a training burden on their shoulders, but for the majority of the beginning jiu-jitsu population, you should feel refreshed after a great training session.

Injury also happens a lot with beginners trying to do too much too soon. Injuries are usually the result of problems with some type of physical conditioning. Issues with mobility and flexibility, for example, are much more prone to serious injury if the body is not physically conditioned. Conditioning your body to the rigors of jiu-jitsu training takes time. 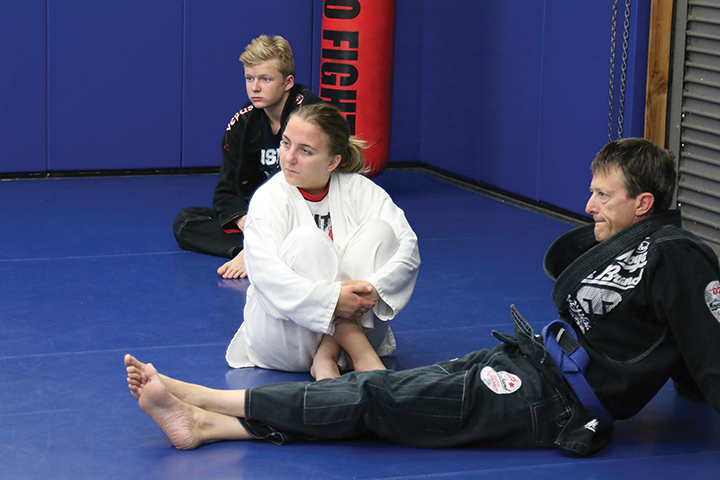 The hours of practice necessary for putting your body into gear is largely because of the time it takes for your body to heal and adapt. Muscles heal quickly compared to ligaments, tendons, and other connective tissues. Ligaments, for example, take much longer because they do not have adequate blood supply. Furthermore, these tissues also take much longer compared to muscle tissue for a lot of the same reason. So while your muscles seem to be acclimating nicely, the tendons and ligaments keeping you intact are lagging behind in their adaptation. It will take more than a protein shake to get them up to speed.

New students should not train as often as they can, but, rather, as often as their bodies will allow them. The trick to practicing jiu-jitsu for a long time is not overdoing it in those first few months. Give yourself time, allow your body to rest and recover by scaling back your 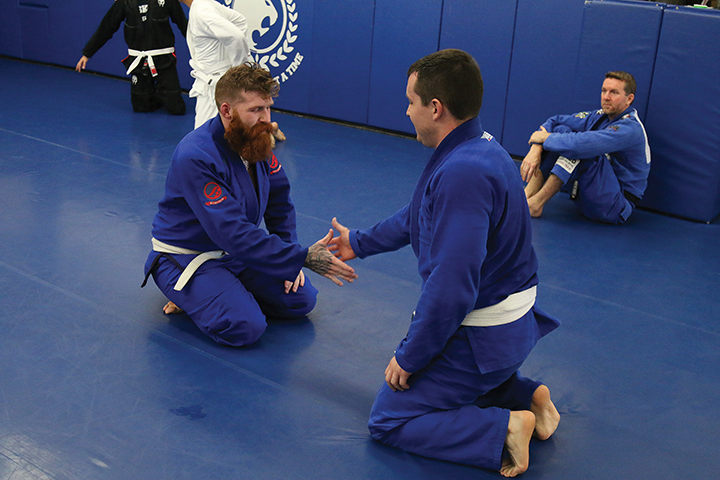 training when your physical and mental capacities seem to be diminishing.

A good practice for maintaining consistency is to take a look at your schedule and identify times when you can make training with no complications. Then undershoot. If, for example, you can only identify four classes, aim for three. This is a mental strategy because you will feel better about yourself if you make four classes when you only planned on three. You will feel worse if you only made three classes when you had originally planned four. Undershooting the class times and making more classes will increase the odds you keep up a schedule that works for you, alleviating the frustration from day to day events that seem to come up out of nowhere, inhibiting your ability to train.

Creating a consistent training plan is going to be critical if you are to make big strides over the long haul. Skill acquisition in jiu-jitsu takes time and practice. More importantly, it takes consistent and constant practice. What good is it if you train twice daily for three weeks and then have to take a month off? I 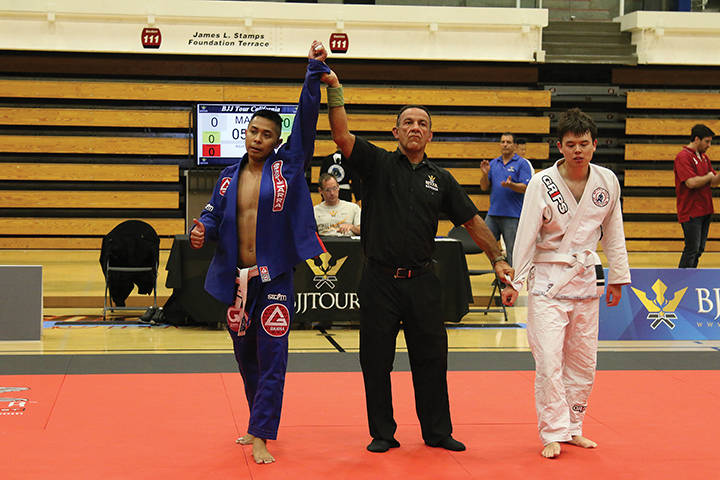 dentifying a training plan that puts you on the mats at a solid, sustainable pace is a much better plan of action in order to mitigate risk of burnout and injury. Take steps back when needed. Training hard does you no good if it has a negative effect on your day-to-day living. Remember that proficiency in jiu-jitsu will not be achieved overnight. Be patient and be consistent and eventually you will get there. Train smarter, not harder.

Edwin Najmi: “Never be satisfied. Add new weapons to your game or you’ll be left behind.”