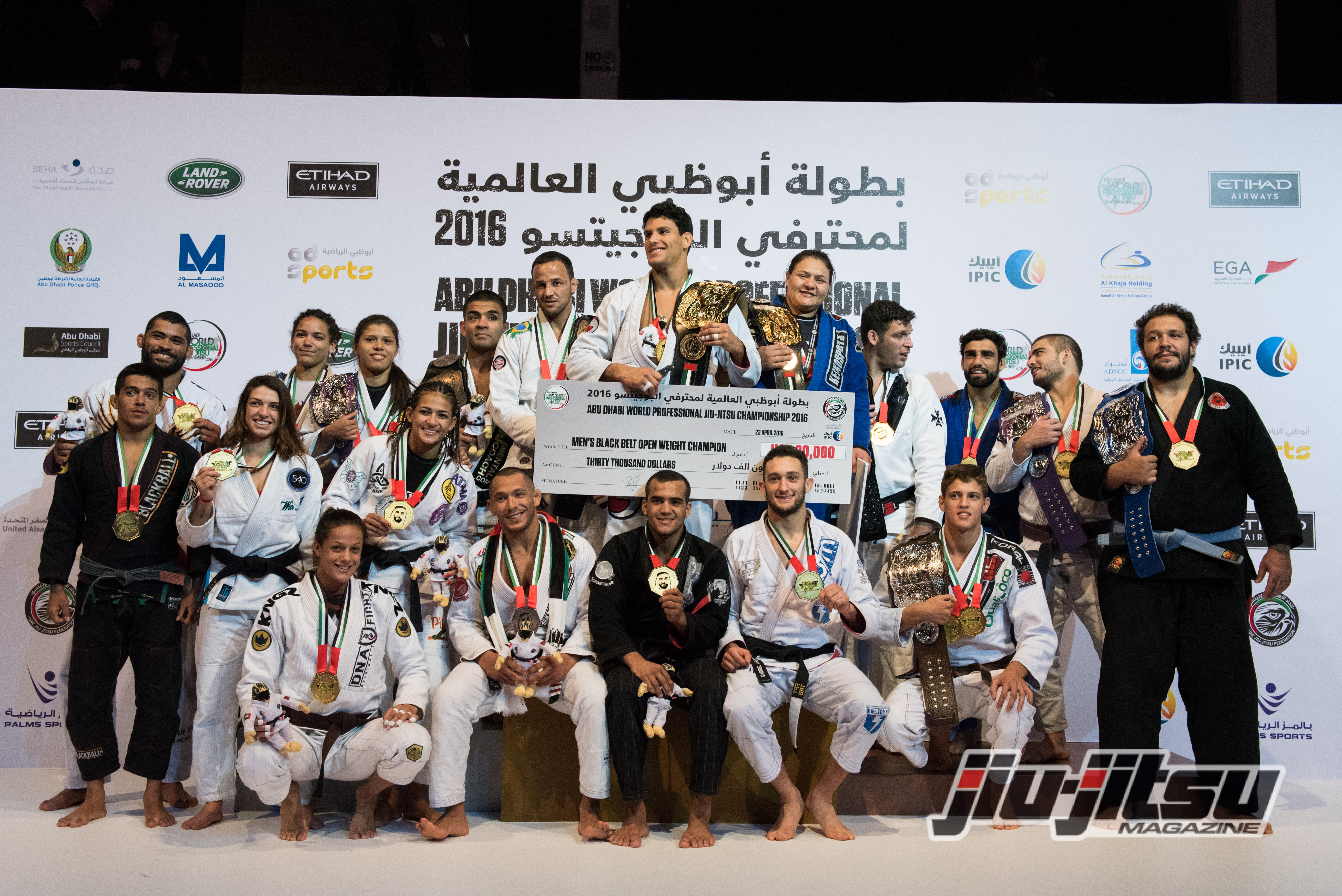 Saturday marked the conclusion of the World Pro Jiu-Jitsu Championship. Lots of exciting action throughout the day. Here’s a recap of all the Black Belt and Legends finals. Look for full coverage along with amazing pictorial coverage complete with interviews in the June issue of Jiu-Jitsu Magazine.

Tayane, got the take down, then advantage for a pass attempt, eventually passing and moving to mount. Maintained the mount while Araujo struggled to get free. Araujo eventually got the win via choke from the mount.

After exchanging positions Jesus managed to finish Cerqueira with a bow and arrow choke after getting some points earlier in the match.

Guard pull early, both assessed a penalty for stalling.? Great match, they exchanged foot locks and several kneebar attempts by Bia until one stuck with just 4 seconds to go. At that point Bia was leading by one advantage.

After a double guard pull Mackenzie came to the top first and got the advantage. From there it was a passing battle with Marina managing to fend off an onslaught of pass attempts from Mackenzie. At one point it looked as if Marina was going to pull off a spider guard sweep but Mackenzie stuffed the attempt and got back on top. It was a very close match but Mackenzie managed to keep a constant attack throughout and earned the 2-1 advantage differential.

Bia pulls guard early but isn’t too long before Tayane passes for 3 points. That would hold as the winning score as Bia managed to keep Tayane in her guard until just moments to go, it wasn’t a guard pass since Bia managed to get to a turtle position. The win give Tayane double-gold winning both 70KG and Open.

Evangelista got a sweep and a mount with 45 seconds to go. Was up by one advantage prior. Silva reversed towards the end. Evangelista won on points.

Santos racked up points early by passing and taking the back. It looked as if he was going to catch Pena in a choke, however Pena managed to escape. The two exchanged positions for a while. Eventually Pena gained 2 points for a sweep. Towards the end Felipe went hard for a toe hold that looked like he might actually get however Santos managed to hold off until time ran out getting the 7-2 points win.

Exchanged guard passes and were tied 2-2 and 1-1 on advantages with 20 seconds to go. Despite the low score this was an exciting match to watch. Both were in trouble at times but eventually the decision went Lo’s way.

Souza pulled guard off the start. More than a minute in Souza got sweep that then lead to a scramble with Satoshi getting a crack at appoints for the sweep. The two exchanged positions, both picking a few more points with Gabriel Souza ending up with 6 points to Satoshi’s 4.

Once again this match was guard player vs. passer. Miyao going inverted more often than Goose and Maverick the score remained pointless for much of the match with Junior receiving advantage points for his passing attempts. Mid way through the match the ref did a reset and it looked to me as if the grips weren’t put back the way they were found. When time eventually ran out it was Marcio Junior with the win thanks to a 2 to 0 advantage advantage.

This match started off a bit slow until both of them exchanged sweep attempts, one after the other. Eventually Pena was able to make one stick. This gave him a points advantage and forced Junior to open up his game. Eventually Pena managed to get to armbar position and got the finish with about a minute left to go.

The Legends matches were all 10 minutes in length. This was a perfect example of patient jiu-jitsu by two veterans of the sport. Cruz pulled guard early with Comprido getting a couple advantages for attempted passes. During the pass attempts Cruz managed to recover the guard and avoid giving up any points. With less than a minute to go Cruz got the sweep and the two points that were enough to get the win.

Moura in guard early, bouncing between a spider, butterfly, and knee shield. Moura attempted quite a few sweeps, but Freitas managed to stuff them. Eventually Moura got to a sit-up, the stood to sweep. Freitas played a similar game to Moura on the bottom. Moura eventually passed with a leg drag off a failed shot at the back. With a little more than three minutes to go Freitas managed to get a sweep earning two points. With a minute to go Freitas ended up evening the score by passing guard. At that point each competitor had 5 points 3 advantages and 1 penalty. At the very end Freitas went for a collar choke while in side control, he didn’t get the choke, but he earned an advantage for the attempt. After the match Moura needed help getting to his feet after sitting down for a moment. This was one exciting match.

It wasn’t a guard pull, but the two of them both dropped to the mats early. There was a brief exchange of positions but it wasn’t long before Vitor “Shaolin” Ribeiro managed to get the collar choke to finish.

Check out all the action in the June issue of Jiu-Jitsu Magazine. 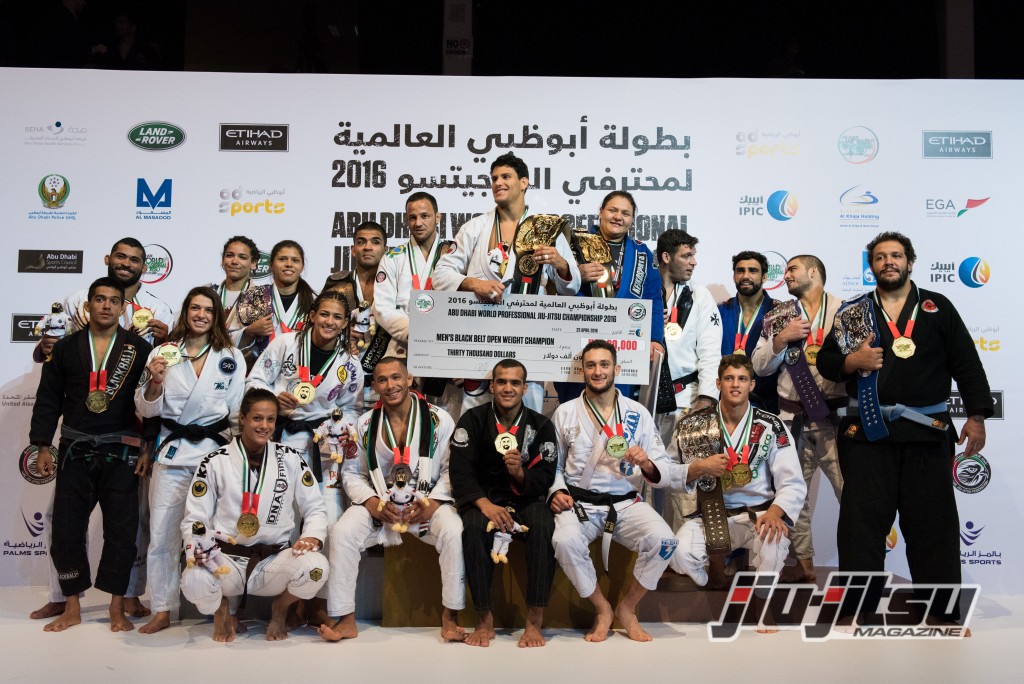 10 Mistakes in Strength & Conditioning for Jiu-Jitsu