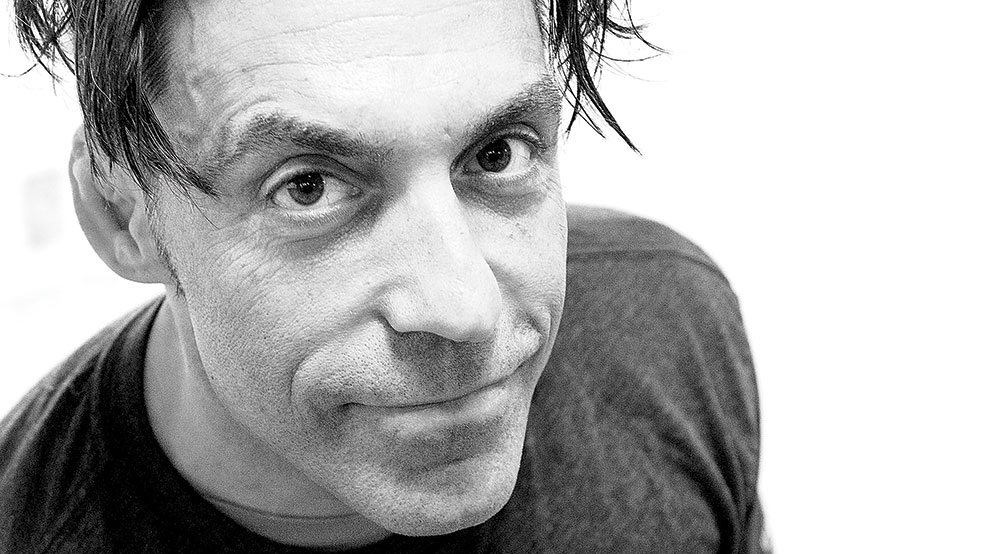 A couple years ago, I started looking into writing and taking photos for jiu-jitsu. In search of inspiration, and that je ne sais quoi of what made for good content, I stumbled upon the works of Nick Gullo or better known as Nick “The Tooth.” I began reading articles he wrote that ranged from fighter interviews to eyebrow raising training techniques such as urine therapy. I had the pleasure of meeting Nick during a jiu-jitsu tournament a couple years back when I was just starting to write and take photos. I recognized him looking through the viewfinder of a camera and introduced myself, never thinking at the time I would be interviewing him for Jiu-jitsu Magazine. He was kind enough to even give me my first piece of professional advice and even a lens recommendation that I still use today.

It’s almost impossible to categorize Nick as any one type of person (and I think he likes it that way). He’s purely someone that always follows his curiosity regardless of where it may lead. Sometimes it brings him octagon side of a UFC fight, other times to the podium of a jiu-jitsu tournament. Recently, his curiosity brought him running naked into the freezing Atlantic Ocean.

As a former wrestler, and author of Into the Cage: The Rise of UFC Nation, Nick knows his way around the combat sports world. As a jiu-jitsu practitioner training out of the Art of Jiu-jitsu Academy in Costa Mesa, CA, he learns the art under the instruction of the Mendes brothers. Through Nick’s grappling pedigree and life experience, he provided us with a unique perspective to some of the deepest questions we had about the world of jiu-jitsu…

The Art of Jiu-Jitsu Academy is an iconic jiu-jitsu gym. I’m also a big fan of Rafael and Guilherme Mendes’ jiu-jitsu style. What made you choose AOJ and to learn under the Mendes’ brothers?
I first rolled in 1999 with Dana White and Jon Lewis downstairs in what is now the UFC corporate headquarters. Having watched the first few UFCs, I was familiar with the sport, but I’d never tried it out. It was just one session, and I wasn’t interested in grappling at that point. I wrestled from ages 8 to 18, and there were so many other things I was exploring like surfing, etc.

But four years ago, I started working on the book, Into the Cage: Rise of UFC Nation, and for my research I decided to start training.

I’m friends with Pat Tenore, founder of the clothing company RVCA, and he told me to hold off on joining a gym because he was soon to open Art of Jiu Jitsu with the Mendes Brothers. I had no idea who they were, but I trusted Pat and knew he was a black belt under Alan Goes, so on day one I walked through the glass doors and I’ve been there ever since—almost four years now.  First and only gym I’ve ever rolled at.

Do you have a preference between gi and no-gi jiu-jitsu?
I train both gi and no-gi equally. I dig the no-gi classes at AOJ because it’s a very core group of six to twelve of us and I get a lot of one-on-one time with Rafa, whereas up to sixty people attend the gi classes.

If you could travel back in time to when you were a white belt, what would you tell yourself?
People always say, I wish I would have started earlier, or I wish when I first started I knew X or Y or Z. But I wouldn’t change anything. Jiu-jitsu is just another detour down this strange surreal journey we call life.  My goal is to enjoy the scenery while trying to make mine worthy of the limited time I’ve got.

You’ve been at the forefront during the rise of the UFC and MMA as a sport, as detailed in your book Into the Cage: Rise of UFC Nation. Do you see any parallels with the rise of sport jiu-jitsu the last several years?
Jiu-jitsu and MMA are synergistic in the sense that jiu-jitsu birthed the UFC, and in turn the popularity of MMA exposed jiu-jitsu to the masses and lured many into grappling. Jiu-jitsu competitions allow us to test ourselves not unlike how our MMA heroes test themselves, only without the trauma endured from striking.

Do you ever see jiu-jitsu gaining the popularity to make it into the mainstream? What challenges do you think the sport/art of jiu-jitsu must overcome and how would it accomplish that?
Jiu-jitsu is already mainstream in the sense that many people are at least aware of the art. Celebrities practitioners like Anthony Bourdain and Ashton Kutcher further expand that reach. But I don’t see it rising to the participation levels of football, baseball, or basketball, because those sports are already woven into the social fabric, and as far as growth in spectators, the sport is just too nuanced for mass consumption. Even many people that train find the sport boring to watch.

If you could change one thing about sport jiu-jitsu, what would it be?
I love competing in jiu-jitsu tournaments, but I’d like to see Eddie Bravo’s submission only format in a gi tournament- a single ten minute round followed by a round where both competitors start from the back, and the competitor with the fastest submission, or in the event of no submission, the fastest escape, wins. That would be dope.
I enjoyed the pilot for Looking for a Fight with Dana White, Matt Serra, where you travel in search of MMA talent. With jiu-jitsu athletes such as Kron Gracie, Gary Tonon, and Mackenzie Dern expressing interest in MMA, do you see a future for jiu-jitsu athletes in the UFC?
Whenever a top jiu-jitsu competitor tells me they are transitioning to MMA, the first thing I ask is if they ever wrestled. Elite wrestlers enjoy such an advantage over elite BJJ players because there is no guard in wrestling—the entire fight is about putting someone on their back, and resisting that position. And in MMA, playing on your back is a major disadvantage. Now that’s the rule. The exceptions are Demian Maia, Brian Ortega, and Jacare. That’s why the UFC roster is stacked with wrestlers. It’s also important to note the difference in caliber between UFC athletes and other organizations. Honestly, if I were an elite BJJ player, I would test the waters in Asia where there is intense fan interest in BJJ pedigrees, and the competition is not as stiff. 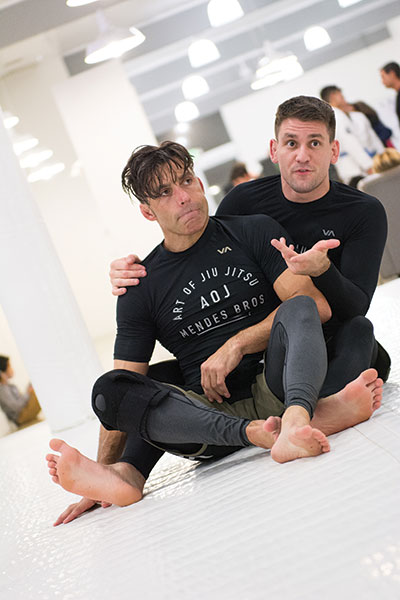 Do you think jiu-jitsu athletes making the switch to MMA reduces the talent pool for jiu-jitsu?
It’s ridiculous to think, given the “amateur” status of BJJ players, that these athletes owe any allegiance to the sport. At some point you need to get paid. While medals and accolades might translate to seminars, they don’t directly pay the bills. Neither do Facebook and/or Instagram likes. The IBJJF is a for-profit organization, which means they are in it for the money. Why should a BJJ player think differently? However, if elite athletes want to get paid by the IBJJF, they must band together and protest the exploitation of their names and matches to sell tickets and live video streams. In so many ways, until they get paid, it’s not a “real” sport.

Fighters like Roger Gracie were not able to adapt to MMA as well as others. Take Jacare Souza for example. Do you think this is due to the difficulty of adapting the striking game? Jacare seems to have done this very well while others like Roger relied heavily on their jiu-jitsu. What advice would you give to jiu-jitsu athletes looking to make the change?
Best thing I ever heard was, “A wise man knows what he doesn’t know.” For this reason I urge anyone interested in fighting to seek out and train at an established camp, like Kings MMA, or Blackhouse, or with Greg Jackson, or Urijah Faber. Fighters and trainers in these camps can accurately assess ability and help plug holes in an athlete’s game. Me, not so much. 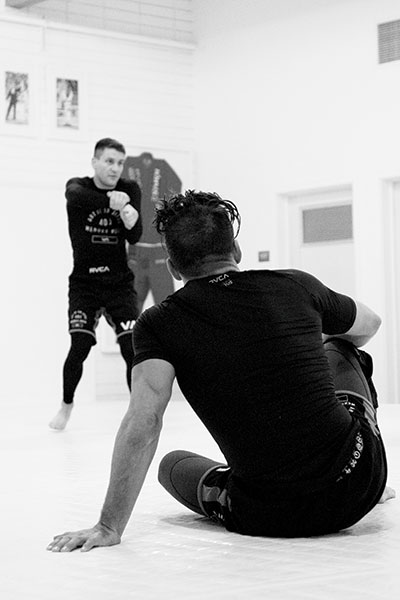 You’ve done a lot of different things, traveled to different places, and you’ve been called a Renaissance man. Anything over the years that has stood out as the most memorable?
The day my wife gave birth to our daughter, Carson. Nothing beats family. Family is the cake, the rest is just icing.

You can currently catch Nick on the UFC Youtube show Looking for a Fight.

Milton Bastos Taking The Back From Turtle