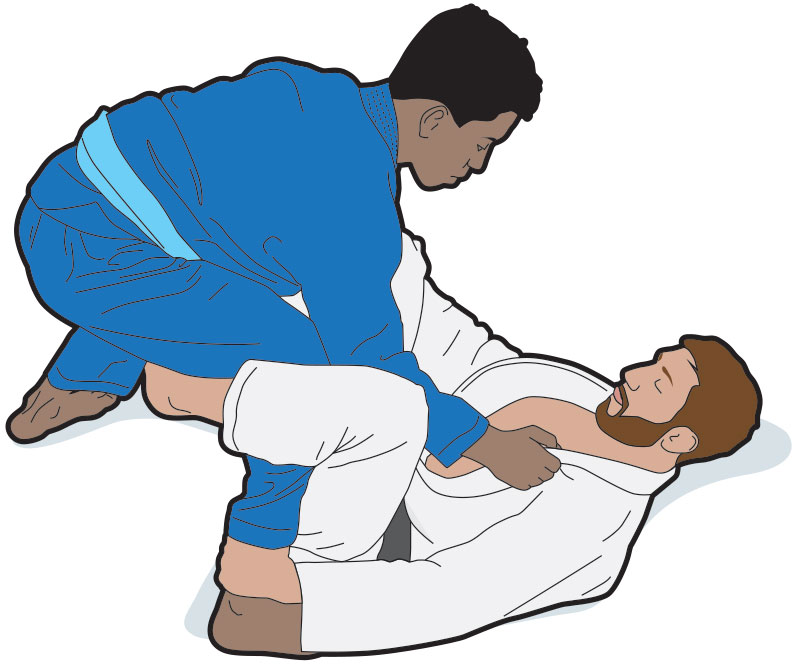 The guard is arguably what made jiu-jitsu famous. To the untrained eye, the bottom man is in great danger, but armed with an understanding of the guard, he has the tools to reverse the position or to end the fight right then and there. Royce Gracie put this revelation on the world stage in the early UFCs, and our collective fascination with the guard continues today. The ability to fight and win from your back is empowering, and if we’re being honest with ourselves, really fun.

Jiu-jitsu evolved rapidly since the Royce Gracie days, and the most visible aspects of that evolution are in the guard. Sport jiu-jitsu has spawned dozens of variations and takes on what it means to play guard. The best jiu-jitsu minds continue to push the position to new and more creative heights, and the rise of jiu-jitsu as an online community means that every innovation spreads quickly. For new students, however, this expansion of technique and terminology can be confusing.

To help with this, we assembled a basic visual dictionary of the guard. We don’t cover every possible variation of grips and leg positioning, but we do touch on the big concepts that you are most likely to encounter in your early months of training (encounter, not necessarily use). We recommend keeping this article handy for reference as you continue training.

Guard
In the broadest sense, the guard is any position where you are on the bottom with your opponent between your legs in some manner. As you’ll see, this open-ended definition can result in some unusual entanglements, but labelling something a “guard” gives you a hint as to the possible intentions: typically to attempt a sweep to either end up on top or to catch a submission along the way. It’s worth noting that a few jiu-jitsu minds argue that you have a “guard” as long as you are on the bottom and your opponent has not yet completed his pass (see the turtle guard).

Closed Guard
This is guard 101 for most new students. Your legs are wrapped around your opponent’s waist, and your ankles are crossed, “closing” the guard. From here, the tactics of closed guard vary based on your grips—sleeve and collar, double sleeve, sleeve and pants, hugging the head, hugging the body, hooking the leg, etc. New students are usually taught the closed guard because it lends itself to self-defense and the high-levels of control it affords helps to slow the game down. With your closed guard set, you are a few movements away from a variety of sweeps and submissions, although you will have to open your guard to attack with almost all of them. In sport jiu-jitsu, we see very little closed guard, as experienced grapplers are adept at avoiding being sucked into the position when they are on top, and often prefer more aggressive open guards when they are on the bottom.
Recommended Grapplers: Any competitor prior to 2005. 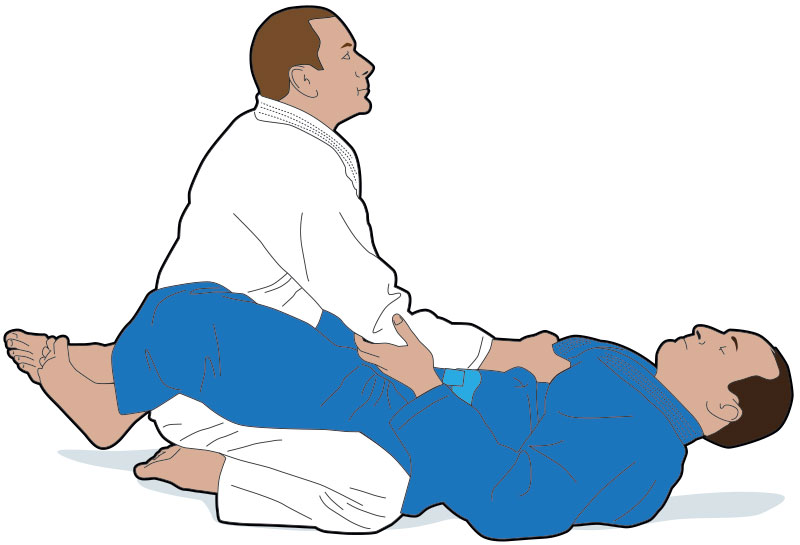 Half Guard
Half guard is any position where you have one of your opponent’s legs wrapped or controlled by your legs. In traditional circles, half guard is thought to be inferior to closed guard, as you are giving up “half” of your control. In a modern sport context, however, half guard can be a powerful position, and some competitors have gone as far as to specialize in attacks from this position. Where new students will use the half guard to survive and (hopefully) recover their guard, a high-level competitor can use half guard to sweep, to transition to deep half guard, to set a butterfly hook, or attack with a leg submission.
Recommended Grapplers: Marcus “Buchecha” Almeida, Lucas Leite, Bernardo Faria 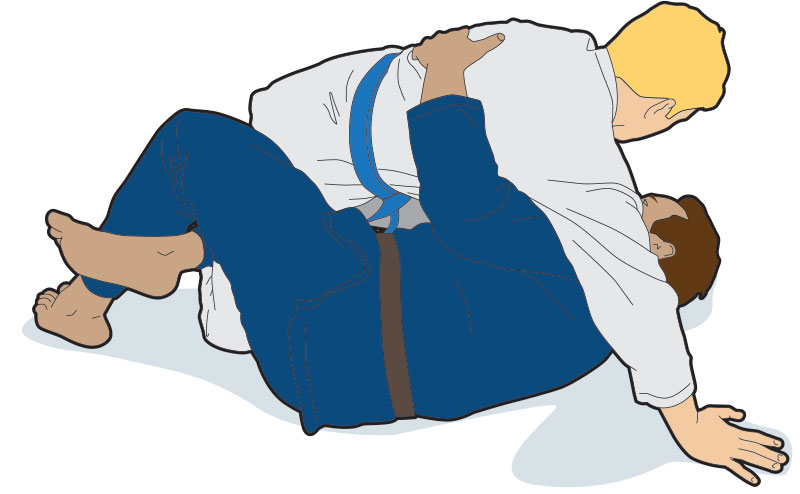 High Guard
Technically, high guard is a variation of closed guard, except instead of having your legs wrapped around your opponent’s waist, you have your legs closed around their shoulders. A strong high guard means having one leg on top of one of his shoulders and your other leg under his armpit. The beauty of this position is that you can attack with a triangle, armbar, omoplata, or cross collar choke (if you have the grip) with very little movement, and having your legs high on your opponent means that he will find it even more difficult to maintain his posture.
Recommended Grapplers: Demian Maia, Royce Gracie. 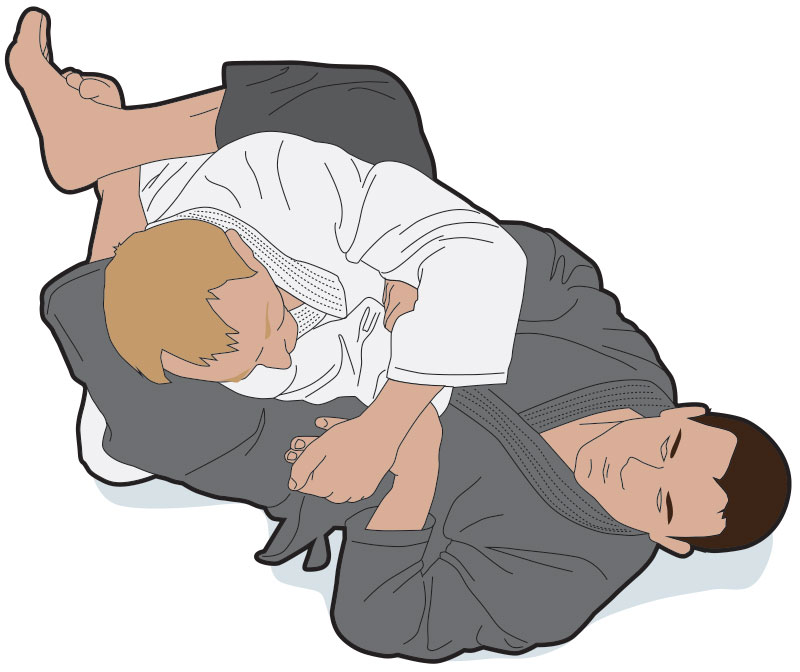 Rubber Guard
The relevance of rubber guard is hotly debated in jiu-jitsu circles. Whether or not you use it, you should be aware of what it is for the sake of jiu-jitsu conversation. Rubber guard is a variation of high guard where you grip your own ankle to increase your mobility and your ability to control posture. Eddie Bravo popularized a procedural system for the position under the banner of 10th Planet Jiu-Jitsu. At the same time, Bravo and other critics note that the idea of grabbing your own ankle is not in itself revolutionary, as other grapplers have used variations of what we now call rubber guard. Harsher critics argue that the reliance on extreme flexibility makes this position dangerous for new students.
Recommended Grapplers: Eddie Bravo, Nino Schembri 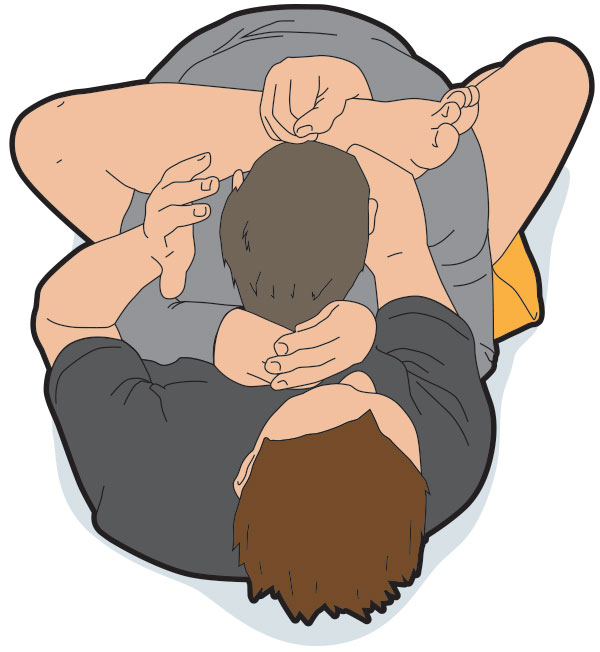 Spider Guard
This is a classic open guard position. To control your opponent, you establish a double sleeve grip and use your feet in your opponent’s biceps to attack their posture and destabilize his base. Spider guard gives you access to the lasso hook and creates opportunities for triangle chokes, omoplatas, and biceps slicers. In the hands of top competitors, spider guard can blend with positions like De La Riva and grip variations like sleeve and collar. Traditionally, lanky grapplers tend to gravitate toward spider guard because of the amount of space and mobility it provides for footwork.
Recommended Grapplers: Leandro Lo 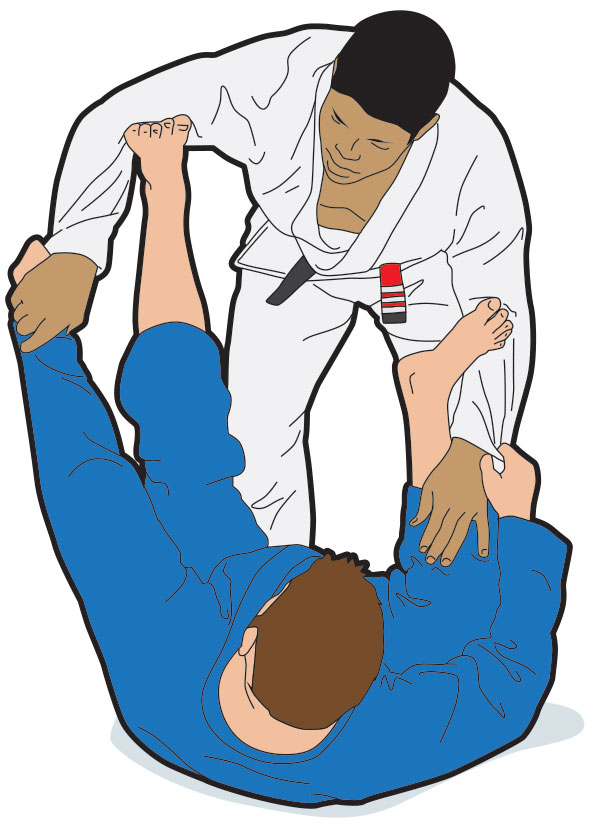 Open Guard
If the closed guard is when your ankles are crossed, open guard is any guard where your ankles are not crossed, making this an umbrella term that encompasses a wide range of guards. You can play open guard with your opponent kneeling, or your opponent standing, but in most practical applications, your opponent will stand to pass leaving you to use your feet and some grip control (like sleeve and collar or sleeve and ankle). Open guard will be a part of your game in some form or another, and the wide variety of open guards means that who you are as a grappler is likely to shine through in this position.
Recommended Grapplers: Any modern competitor. 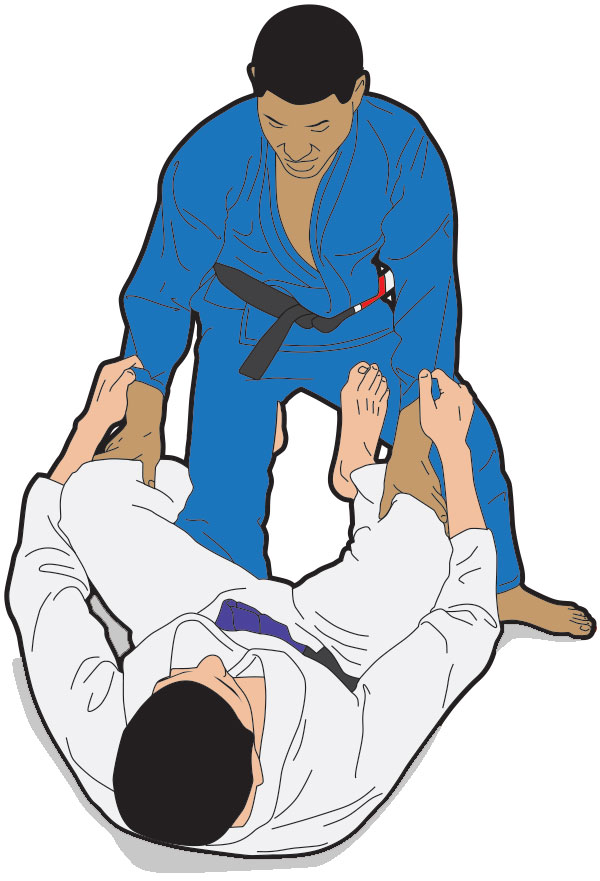 Scissor Guard
Sometimes referred to as knee shield guard, scissor guard takes the scissor sweep and treats it like a position. With your knee positioned high in the chest and a collar and sleeve grip established, scissor guard can give you a significant amount of control over your opponent, and the constant threat of a scissor or hook sweep gives you a smokescreen for setting up triangles and cross collar chokes. Whether they linger in the position or not, most grapplers end up using some variation of scissor guard to transition from closed guard to open guard. You are more likely to see a classic competitor using scissor guard than the latest batch of high-level competitors.
Recommended Grapplers: Any competitor prior to 2005. 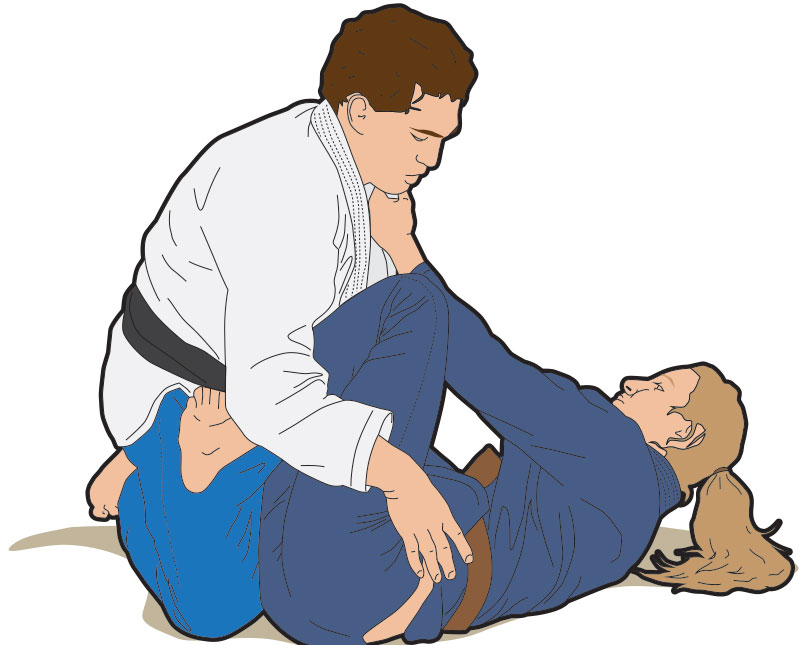 Sitting Guard
This open guard position looks how it is described: you are sitting on your butt looking to attack your opponent. In most conversations, sitting guard can refer to you butt-scooting with both legs flared out, butt-scooting with one leg flared and one leg posted up (as though you were about to execute a technical stand-up), or butt-scooting with you hugging one of your opponent’s legs. Technically, butterfly guard (talked about next) is a form of sitting guard, but the placement of your hooks dramatically changes your approach. Sitting guard is great for mobility, allowing you to quickly attack with arm drags or single legs. Some submissions are possible from there, but it’s primarily used for getting to the top.
Recommended Grapplers: Marcelo Garcia, Jeff Glover, Mackenzie Dern 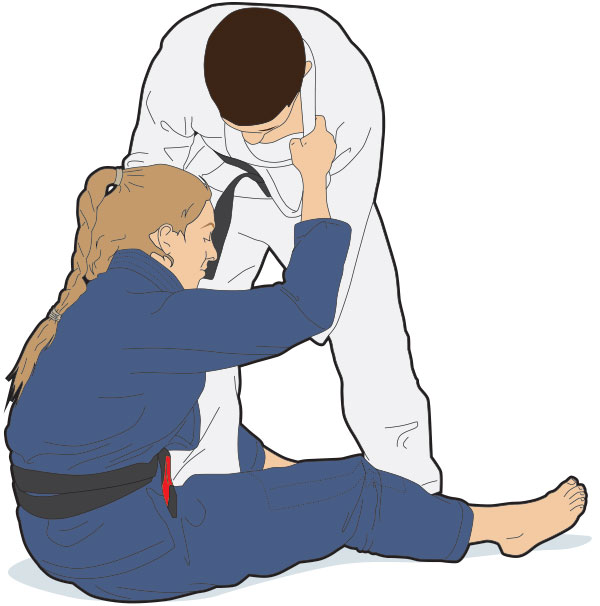 Butterfly Guard
The sister to the seated guard, the butterfly guard has you on your butt with at least one foot set inside of your opponent’s thigh. Butterfly guard is a dynamic open guard primarily used for butterfly sweeps. Like the seated guard, submissions are possible from butterfly guard, but the strength of the position lies in the leverage of the butterfly hook, meaning that if you play this position, you will either get the sweep or use it to transition to an even stronger sweeping position, like X-guard or single-leg-X-guard.
Recommended Grapplers: Marcelo Garcia 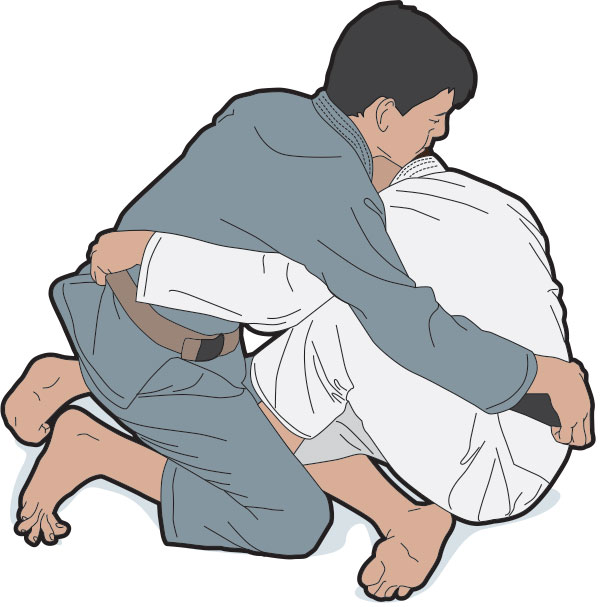 De La Riva Guard
Taking its namesake from Ricardo De La Riva, De La Riva guard refers to a now fundamental open guard position where you hook your opponent’s knee with your foot. From there, the De La Riva guard has a variety of permutations. Your non-hooking foot can be used to pressure the hip, the opposite leg, as a spider guard hook, or as a lasso hook. In its original form, the De La Riva guard was primarily a sweeping position, but with the rise of Berimbolos and 50/50 guard, it is often used as a path to the back or an entry for a leglock.
Recommended Grapplers: Ricardo De La Riva, Mendes Brothers, Miyao Brothers, Keenan Cornelius, Leandro Lo.

Inverted Guard
Take the open guard or closed guard and spin it upside down. That’s the inverted guard. This position attracted the ire of traditional grapplers in the early 2000s, but now inverted guard has evolved to play a role in a number of sweeps and transitions—from playing open guard as a position itself, or using inversions to set up Berimbolos or leglocks. When played in isolation, inverted guard is a sneaky way to set up triangles. When mixed with other guard positions, you can see inverted guard concepts playing a role in De La Riva guard, Reverse De La Riva guard, 50/50 guard, and even takedowns.
Recommended Grapplers: Ryan Hall, Miyao Brothers, Mendes Brothers 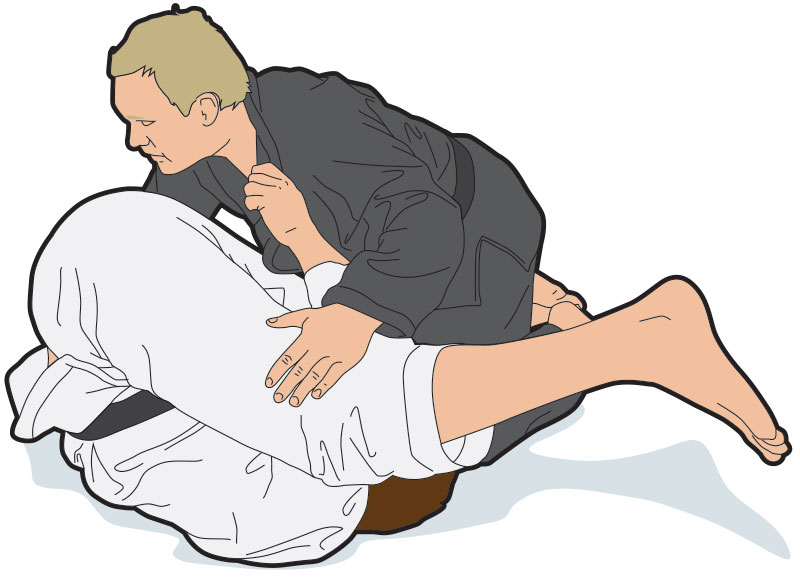 Turtle Guard
Depending on who you ask, the turtle position may or may not belong to the guard family. While you don’t technically have your opponent between your legs, he has not yet established the control necessary to earn guard pass points. Regardless of the terminology, you are likely to find yourself using turtle to defend the guard pass attempt so that you can either finish a reversal or recover your guard. If you fall into the Eduardo Telles line of thinking, turtle can be a powerful sport jiu-jitsu position.
Recommended Grapplers: Eduardo Telles, High-Level Wrestlers 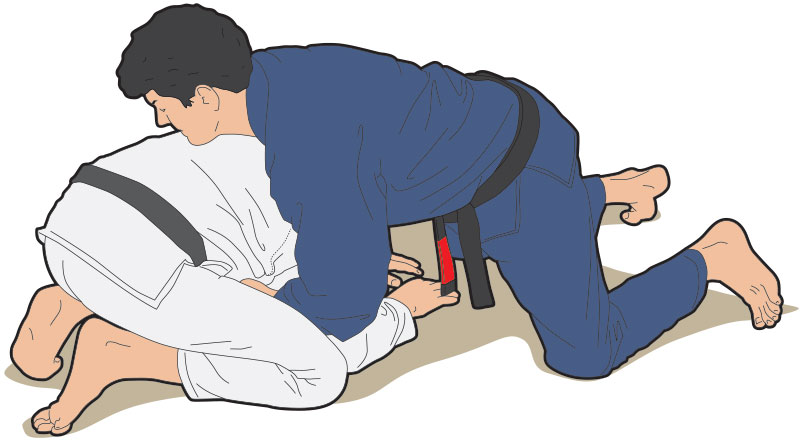 This is by no means an end-all-be-all list of guard terms or positions. Your instructor may place an emphasis on other positions or use differing terminology. That’s fine. Our goal here is to help you familiarize yourself with some of the most commonly discussed guard positions so that you can further your learning. Next time, we will explore some of the most common advanced guard positions.

More Reasons To Wear A Mouthguard