In 1993, Royce Gracie displayed the effectiveness of jiu-jitsu to the world. The momentum of the first UFCs, followed by the Internet age, and the advent of social media have caused tremendous growth in the popularity of the art. More and more schools are opening, existing schools of traditional arts are incorporating jiu-jitsu into their programs, and even online training programs are now available. Naturally with this increased volume of students taking some form of grappling, there has been a commensurate growth in the sport, creating more and more tournament organizations. 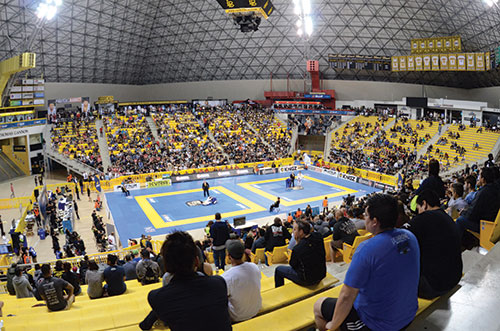 There are prestigious international tournaments and even talk of making jiu-jitsu or submission grappling an Olympic sport. So to satisfy this thirst for more and better competitions, further legitimizing the sport and taking them to the next level of mainstream legitimacy, there has to be a solid competitive infrastructure for competitors, coaches, and spectators to rely on. While the tournaments do not have to be the same themselves, there are certain steps that should be taken to ensure a unified approach for everyone to understand.

The growth of MMA to mainstream success can be partially attributed to the adoption of unified rules. Unified rules enable a seamless understanding of the competition for sanctioning bodies, tournament organizations, competitors, and spectators. Grappling really would benefit from this type of adoption, although it can be considerably more complicated than something like MMA. Certainly it can be done, as in Tae Kwon Do, Greco-Roman and Freestyle Wrestling, Judo, and all Olympic sports. It would not have to be confined to one element either – there could be distinct sets of unified rules for gi, no-gi, and submission-only grappling. This way it would not impede on anyone’s preference for the type of grappling they prefer. Ultimately though, a unified ruleset should capture the spirit of jiu-jitsu with an emphasis on self-defense, dominant positions, submissions, and not on inactivity and/or strategic exploitation of the rules. 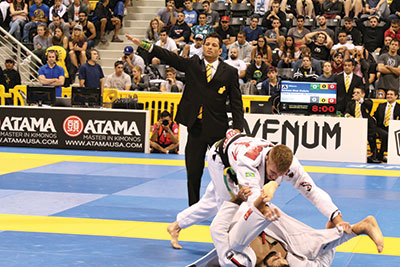 Cameras are everywhere – smaller, cheaper, and with higher quality than ever before. It makes sense to consider utilizing these extra eyes to assist referees in making the correct call. Instant replay is a viable option and can help referees quickly resolve disputes over existing calls. Naturally, a mechanism must be devised within the rules to how and when these instances of instant replay can be used or when they may be invalidated. One idea is a coach’s challenge rule, one that permits coaches the opportunity to request instant replay on behalf of competitors. While these types of double-check instances could be welcomed, it’s not something that should be overdone to the point of slowing down matches or tournament flow. Additionally, costs and time may be prohibitive in providing each tournament competitor these technological options so they may have to be selectively available; maybe starting with the black belt divisions. Regarding professional events that pay prizes and perhaps even collect PPV money, it may become a requirement that these uses of technology be included in the events. 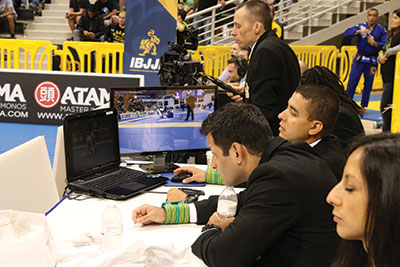 For those unfamiliar, two additional referees are located in chairs in the opposing corners of the match area. Those referees have the same power as the referee in the center and scoring must be confirmed by at least two of the three referees. If they are in agreement, the corner referees remain seated. But should they disagree, they stand up and gesture a score or penalty points to be awarded or subtracted. This method serves as an immediate double-check for the center referee, offering both different viewpoints and experience levels, and can help minimize errors and speed error-correction. It’s currently typically employed by some organizations only for semi-finals, finals of high rank matches, and super-fights. Wider adoption of this system could produce significant results but the challenge is the requirement of having three referees for each individual match, which is a rather costly endeavor for most tournament organizations. Sometimes, the three-referee system is even further enhanced with instant-replay technology, creating the most reliable officiating today. 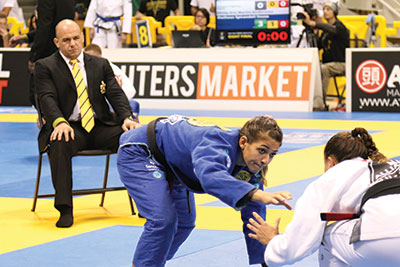 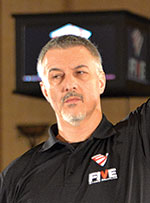 About the Author
David ‘Silverfox‘ Karchmer is a 1st Degree black belt and has been training for over 15 years. David’s martial arts background spans over two decades and includes a black belt in Tae Kwon Do that he received in 1993. His jiu-jitsu journey began at Gracie Thornwood, NY in 1999 after he took a seminar with Royce Gracie and knew he was hooked on the art. In addition to training and instructing, David has focused the last seven years on officiating grappling competitions and has officiated over 3000 gi and no-gi matches at over 60 events for multiple organizations. He is a previous head referee at Grapplers Quest, current head referee at FIVE Grappling, and routinely officiates events around North America.