Choke To Armbar From Kimura Grip with Clark Gracie

With the Kimura Grip of the arm, there are lots of options to attack if your opponent continues to defend the most obvious Kimura attack. In this case, Brandon is continuing to hold his collar and being extremely defensive.

1. Clark steps his left foot over in front of Brandon and brings his inside thigh tight against his shoulder.

2. Next. Clark quickly steps up with his right foot just to Brandon’s side then quickly sits back, all while holding onto his Kimura Grip.

3. Clark’s first option is an armbar. For this, he keeps his left leg heavy over Brandon’s head and keeps a lot of pressure against Brandon’s right forearm with his grip. Also, Clark is using his right arm to put some upward pressure against the right arm in hopes of breaking it free from Brandon’s grip. 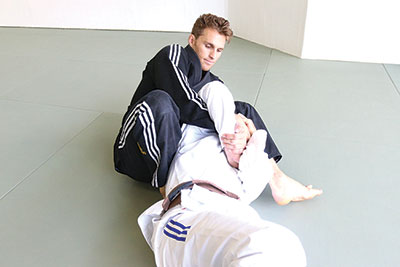 4. If the arm hasn’t come out yet, Clark leans a little bit to his left to give himself space to bring his right leg over and in front of Brandon. Once it’s over, if he can, Clark will cross his legs while keeping his knees together.

5. At this point Clark could expend a lot of time with various grip breaks to free that arm for the armbar. However, he decides to go with a choke instead. In which case Clark loosens his legs a little bit and brings his right foot to the inside of Brandon’s left thigh. It’s important that he contacts the palm of his foot with his thigh; Clark doesn’t want to get his foot between Brandon’s legs. 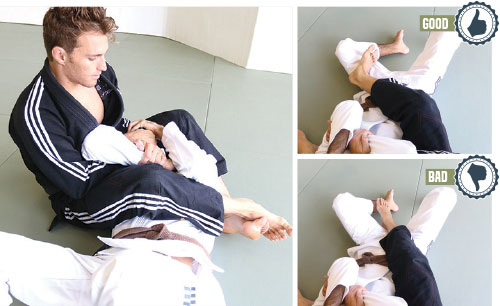 6. Now Clark falls to his right side, his Kimura Grip brings Brandon up on top of him. At this point, Clark lifts his left leg up and over Brandon. Brandon is thinking, “What a stupid move Clark, now I’m going to get on top!”, but that’s exactly what Clark wants him to think.

7. As Brandon is looking to turn toward Clark, Clark bumps him far forward with his left knee against his back. This pushes Brandon further forward than he wanted to. Once Brandon is forward, Clark brings his left foot around Brandon’s body to get in the second hook.

8. Clark’s in a good spot, he’s got the back (points), and still has his Kimura Grip. Now, he brings his left arm up and against Brandon’s face with his elbow, dragging his elbow across his face. Yes, this makes it very uncomfortable for Brandon. As Brandon is looking away, Clark lets go of his grip and gets a grip of Brandon’s lapel –  thumb in. 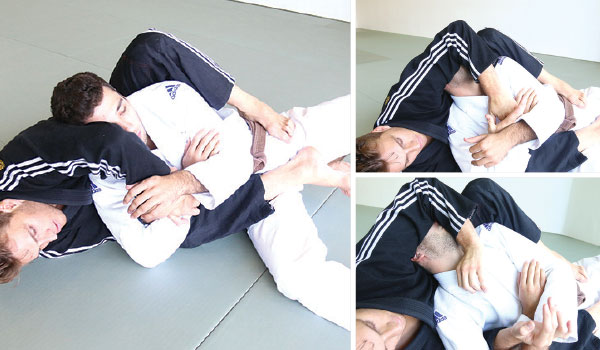 9. Thanks to the arm across the face, Brandon can’t wait to get his head out from under. Clark lets him pass through and what do you know, he’s got the collar choke. 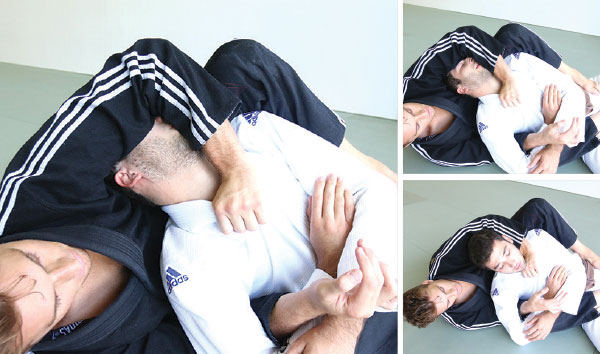 10. To finish the choke, Clark uses his left foot to help push Brandon down, then moves his right hook to the far hip. 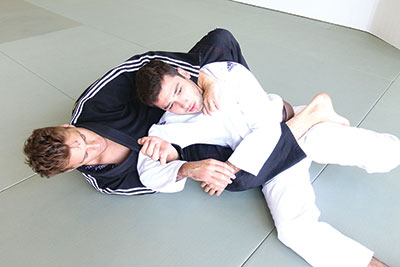 11. Clark is continuing to make sure his left arm is behind Brandon’s head. Then he brings his left leg over Brandon’s left shoulder, clamps it down, and brings his right leg up to lace his legs together. Now to finish it, all Clark has to do is keep his grip of the collar under Brandon’s chin and extend his legs. 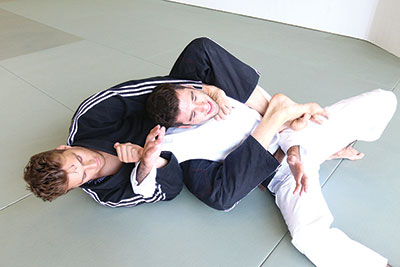 Key Points
When crossing the leg over the shoulder, it’s important that the top leg is the one against the shoulder and is underneath the crossing leg. Otherwise, there’s too much space and your opponent might not feel the effects of having the leg on the shoulder.

Armbar Option
If anything goes wrong with the choke – you lose your grip, or the arm gets too high on their head, you have the option of going back to the armbar.

To do this, all Clark has to do is bring his left leg over and across the front of Brandon’s face. Clark never lets go of his right arm across Brandon’s captured arm. With the leg over, Clark hips forward to pressure Brandon away, his arm slides into position, and Clark can finish with the armbar. At this point, it’s highly unlikely that Brandon’s thinking about defending the armbar after that attack on the neck.

Keys to the Kimura Grip with Clark Gracie

Crucifix from the Back with Alberto Crane