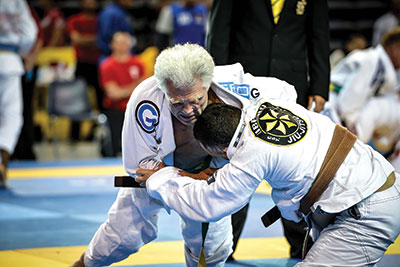 Would judo throws be illegal and considered slams in jiu-jitsu tournaments?

Short answer – No. Most Judo throws are performed in a continuous motion. That’s typically the standard to which slams are considered “slams.” The IBJJF rule book mentions the word “slam” only once to say they’re illegal at all levels. The referencing photo shows someone attempting to apply an armbar on an opponent who’s standing and the person standing forces him to the mat. Every time I’ve seen a disqualification for a slam it’s been after a pause in motion. I’ve seen examples where there didn’t appear to be an intent to injure, and I’ve seen a clear intent to injure an opponent, both met with disqualification. The most common is an opponent who jumps guard; the person standing remains standing and quickly and forcefully drops to their knees, dropping the two of them to the ground with force. After that pause, the responsibility of getting to the ground safely falls on the person standing. In the event that the person standing can no longer hold the weight, it would be a judgment call on the ref’s part whether or not they used force to take it to the mat. One judo technique that’s illegal in both jiu-jitsu and judo tournaments, but not considered a slam, is kani-basami, which is also known as a scissor takedown. It is specifically labeled as an illegal takedown. Something that might look like a “slam,” but is legal, is a wrestling suplex, as long as the movement doesn’t force the opponent’s head or neck into the ground. 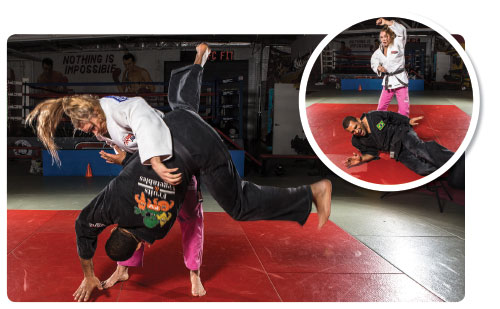 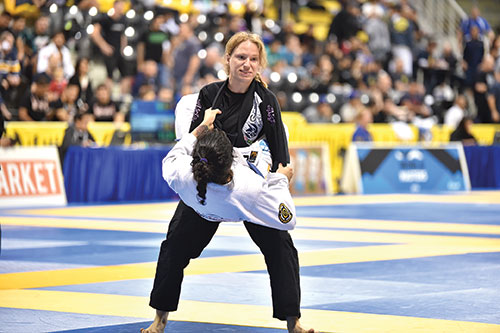 In this photo if the competitor standing were to forcefully drive their opponent to the mat the result would more than likely be a disqualification.

Going to compete in my first competition next month. I’m about 10 lbs away from making it into a lower division. Should I try to cut down in weight or just enter in my current weight class?

In our minds, it’s easy to think, “All I have to do is lose weight like on the Ultimate Fighter, then I’ll be huge and strong compared to the other guy.” It’s nice to think that, but it typically doesn’t work that way in jiu-jitsu. You have to remember that most tournaments will weigh you in just a few minutes before your first match. If you try to do a water weight cut, you’re going to be at a severe disadvantage if it’s anything more than a couple pounds of water (depending on your weight). Often what happens is the stress of this type of cut becomes the focus on your mind and not the actual competition. I’ve been there, and it sucks. You’ve got a month to go, increase your training, clean up your diet, and other things you should be doing anyway. If you’re within a pound or two come time to make corrections, then consider changing your weight class. Otherwise, get a few tournaments under your belt, both the preparation and the actual tournaments themselves, before you take a stab at weight strategies. 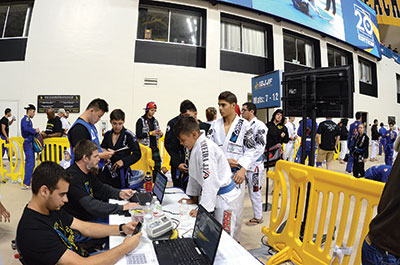 Having to worry about making a weight cut will distract you from your jiu-jitsu, especially at your first tournament.