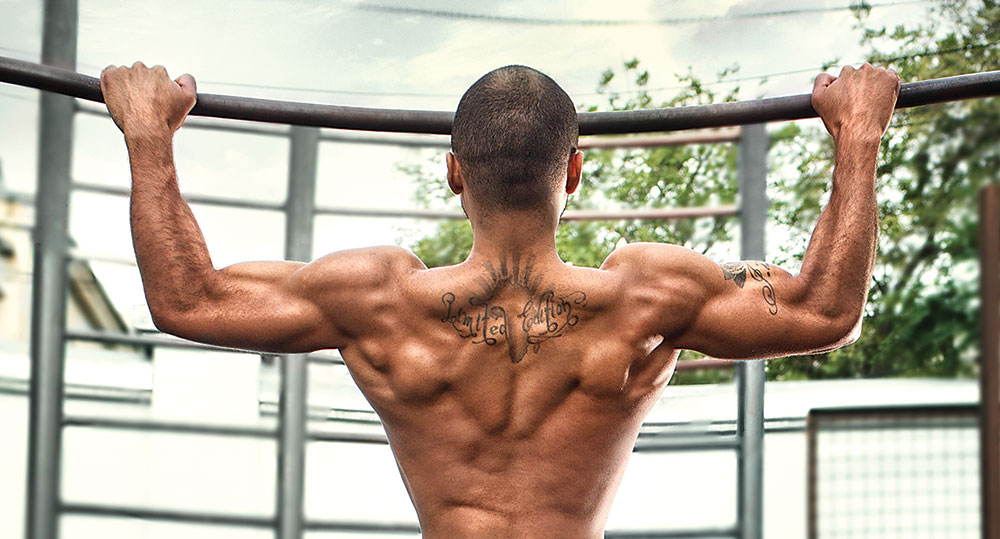 If for any reason you’ve missed the theme of our past two issues, we’re on a big calisthenics kick right now. We’ve shown you how to push-up your game and improve your core performance through planks, but now it’s time to raise yourself up and go above the bar (both literally and figuratively) with pull-ups.

“I HAVE THE POOWWEERR!!”
While the push-up may be old faithful, pull-ups and chin-ups are where it’s at if you want some real “HE-MAN” upper body power from a calisthenic exercise; with the exception of a planche push-up. For starters, our backs have much more muscle tissue than our chests do and since you’re continually raising and lowering your entire body weight, as compared to your feet being used like an anchor with a push-up, the movement is more taxing, but also yields greater results overall.

Muscles Involved
Pull-ups and chin-ups are compound exercises that require use of a variety of muscles, including the bicep brachii, brachialis, brachioradialis, latissimus dorsi (lats), teres major, posterior deltoid muscles, lower trapezius, pectoralis major and minor, triceps brachii, levator scapulae, rhomboid, and pretty much all of your core/trunk muscles, to be performed. As you can imagine, that’s a lot of internal movement going on underneath the skin, but the more recruitment of muscle fibers the better.

How Does That Transfer To Jiu-Jitsu?
How many times have you heard, “Posture up!” from your coach or seen a guy get smashed by a sprawl even though he had a grip on the legs? Performing pull-ups/chin-ups consistently will help you gain strength in your back to better deal with those situations. Another example is when you arm or leg drag an opponent. You are pulling them using the same mechanics as these exercises. They also inadvertently force your grip to improve because you must be able to hold up and move your body weight. I’m sure we all know how a strong grip can help or hinder us, dependent upon who’s applying it.

No Excuses
You don’t have a gym pass? So what! Pull-up/chin-up stands are available for your home. Still too expensive? Look into a doorway bar; there are removable models or ones that you can anchor to the frame. These will, however, limit you to perform more advanced movements because of factors, such as height and surroundings, but they still work great. Now if those are still too expensive or you don’t like them, I recommend taking a page out of the creator of Movnat, Erwan Le Corre’s playbook and find something to do it on. The side of the monkey bars at a local playground or even a large, steady tree branch will suffice. Movnat is a workout program that relies on use of our environment and bodyweight training. In order to do these types of exercises, you must perform them on an immovable object (or at the very least stationary) that will not break due to your bodyweight being suspended from it.

The Broken Record
Incase I haven’t drilled it in your head enough over the last two issues, here’s why calisthenics are so great again!
• Challenging exercise
• Little or no equipment needed
• Can be done almost anywhere
• Increases in strength and flexibility
• Improves balance, coordination, agility, muscular and cardiovascular fitness