It’s not the first time we’ve had Rodrigo “Comprido” Medeiros gracing the pages as a main feature in JJM. Deb Blyth had a great interview article on him in Issue 29, giving us an inside look at the life of the always colorful and charismatic Comprido. If you haven’t had the opportunity to check it out just yet, I recommend you do. This time around however, we were lucky enough to have him take the time out of his busy schedule to come down to JJM HQ and give us a breakdown of some great technique on a classic move, the toe hold. This shoot was just days before his win in the Masters 1, Ultra Heavyweight division at the Pan Ams this March. An individual win is always great, but he’s seeing the fruits of labor in another area as well, as his team recently captured the title at the Chicago Open. Congratulations to the Brasa team! If you’d like to find more information on Comprido, his school, seminars, camps, etc. you can go to www.compridobjj.com. Assisting him with the techniques is fellow black belt, Marcelo Barbosa.

Toe Hold From Side Control
Comprido has Marcelo in his side control. To prevent Comprido from advancing his position to mount, Marcelo places the sole of his right foot up against his left bent leg, so that his right thigh rests against Comprido’s rib cage. From here Comprido reaches up, over and around Marcelo’s right shin with his right arm, brings it through the gap between Marcelo’s leg and hugs the outside of the far hip with his hand. By doing so, Marcelo’s foot pops off, is no longer secure and is open for attack. From here, Comprido brings his left knee up to and against Marcelo’s body so that he can release his crossface, reach with his left hand to wrap around the toes, and lock on “The Proper Grip” around the foot. While simultaneously lifting his elbow, he brings the foot under his chest, forces it down to Marcelo’s body, and gets the tap. 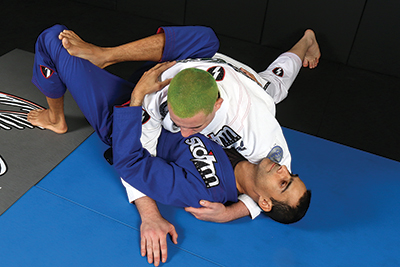 1. Start from side control on your partner. 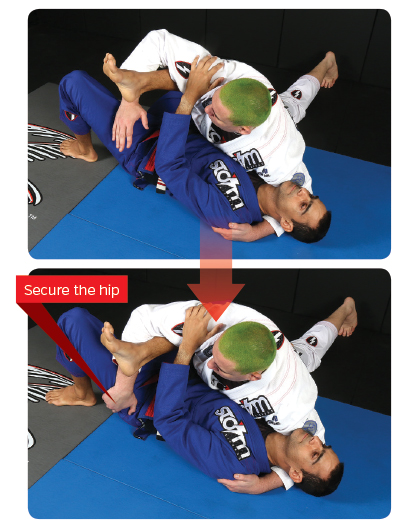 2. Bring your arm over and around the leg.